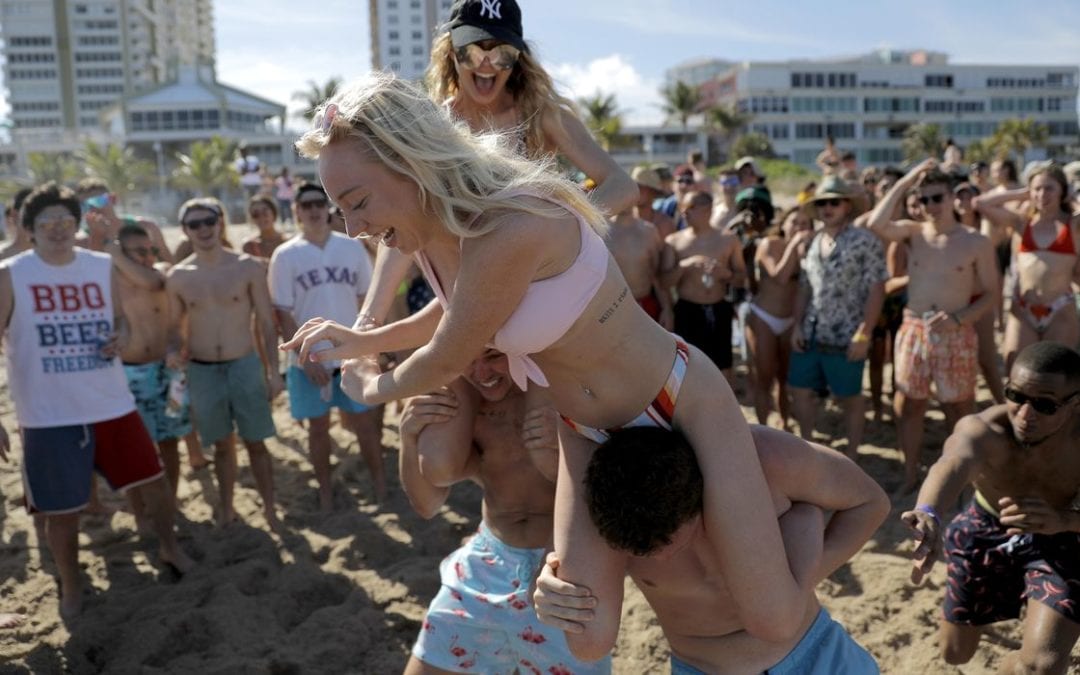 The seemingly casual and cavalier attitude toward the global pandemic by some college-age spring breakers has ignited a fierce backlash, with millennials and Gen Z-ers calling out their peers to be better.

Recent news footage of packed Florida beaches and defiant Facebook posts about keggers in the face of the coronavirus have only fueled the clash.

While boomers tut-tut and health officials despair, a great intragenerational debate has broken out on Twitter, Instagram and Facebook between those who say young people should practice social distancing and proper health hygiene and a YOLO faction of those who insist they will fight for their right to party.

Government measures to shut down schools and close borders in an effort to contain the virus haven’t stopped some college students and millennials from hitting the beaches and booking discounted flights around the world.

In a desperate effort to curb the unrelenting flow of travelers, public health officials are asking celebrities with massive followings on social media to use their influence to promote social distancing.

Even though the young seem to be less susceptible to the most serious effects of the coronavirus, Dr. Adams said, “if you are negligent, if you don’t practice good hygiene, if you go out and spread disease to someone else, then it can add up over time.”

Not everyone has been convinced.

“My flight to Hawaii might be canceled because of the coronavirus……screw that r u kidding I’ll risk a deadly flu for a tropical vacation any day,” Twitter user @kelagelling said March 10.

The price of airline travel has dropped dramatically within the past week. Spirit airlines is offering flights to Florida for as low as $19 one way, enticing young travelers to book spontaneous getaways. Millennials have taken to Twitter to boast about their discounted vacation plans, creating a social media firestorm as users denounce their generational cohorts for traveling at such a dire time.

“Yes, flights are very cheap right now,” Twitter user @crystalramirez tweeted. “Coronavirus may not be dangerous to YOU, but u can still be a carrier and spread it to ANYONE — even your own parents/grandparents. Is a cheap flight really worth putting people in danger & risking so many lives? Don’t be selfish. Stay at home.”

Twitter user @chellllllyx also chimed in, tweeting, “Everyone who is selfishly traveling due to the cheap flights are why we can’t get this virus under control. All of the festivals are going to keep getting postponed/cancelled as long as people don’t wanna act right.”

Yet many college students are still clinging to the hallowed spring rites and refuse to let the virus ruin their chance to go wild.

A video posted on Twitter by radio personality Aaron Nagler garnered more than 1 million views Thursday. It showed an interview with an unidentified student clad in bright pink swim trunks on a Florida beach saying he decided to take his spring break trip because it was “already paid for.”

“Think about it. Like if you’re elderly and you’re at more susceptible risk, you should be staying inside. But like spring break is once a year,” the student said.

Another spring breaker, interviewed on CBS News this week, said, “If I get corona, I get corona.

“I’m not going to let it stop me from partying,” the student said.

“My friend is in Fort Myers, FL preparing to self-quarantine,” Mr. Vietor tweeted. “Today he drove to get supplies and said he has never seen the beaches more packed. Spring Break in full effect. Local officials and @GovRonDeSantis will get countless retirees killed if they don’t shut this down.”

Mr. DeSantis, who has taken heat for his response to the pandemic, minced no words in a “Fox and Friends” appearance Thursday: “The party’s over.”

“The message for spring breakers is that … you’re not going to be able to congregate on any beach in the state,” the governor said. “Many of the hot spots that people like to go to, whether it’s Miami Beach, Fort Lauderdale, Clearwater Beach, are closed entirely for the time being.”

As the intragenerational battle rages on, social media users are expressing a disheartening sentiment: The virus will continue to infect the nation’s most vulnerable — the elderly — as long as millennials and younger Gen Zers refuse to cooperate.

“The coronavirus is going to wipe out the most vulnerable among us: the elderly, the immuno-compromised, those without health care, those in concentration camps and prisons, homeless folks,” Saira Rao, a former Colorado congressional candidate, tweeted to her 41,000 followers March 13. “If canceling spring break is your greatest burden, maybe don’t say that out loud.”

As beer-pong-playing classmates sat on a porch roof, senior Grant Schultz told the paper that the public celebration was justified given all the year-end partying that now will never come off.

“We thought we had six weeks left. … Now this is kind of like the last hurrah,” Mr. Schultz said. “It’s almost, like, apocalyptic.”