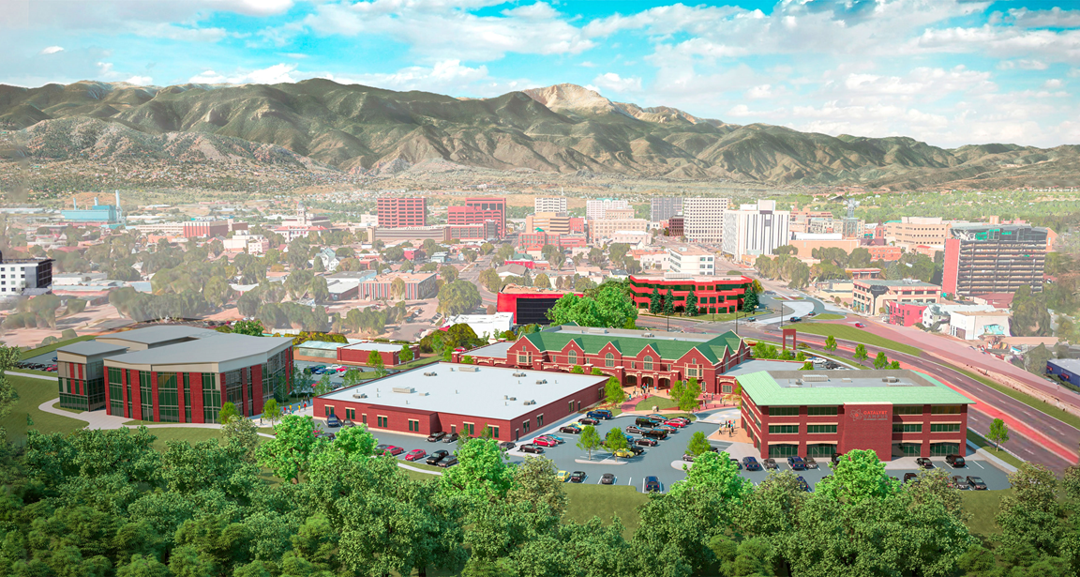 Six years after turning a nearly vacant former railway station into a hub for space and technology startups, Kevin O’Neil has even bigger plans for his Catalyst Campus business park.

Construction is expected to begin early next year on a sixth office building in the 12-acre business park on the eastern edge of downtown Colorado Springs to house its growing collection of space-focused startups and defense contractors. Work was scheduled to begin last year on the 50,000-square-foot building on West Pikes Peak Avenue, but was delayed by the COVID-19 pandemic, O’Neil said.

That’s just the first step in O’Neil’s ambitious plan to expand the campus during the next 10 years from eight buildings totaling 200,000 square feet that house 30 companies and 700 employees, to structures totaling 1 million square feet that will house dozens of companies employing thousands of people along much of downtown’s southeast side. He also wants to open up to 10 satellite locations in other cities by 2026.

“Five years ago, everything here was almost entirely vacant. Now there is no vacancy, property values have gone way up and there is nothing for sale,” O’Neil said. “Catalyst Campus was built as an economic driver for downtown. We did this investment to create jobs in downtown Colorado Springs. Small businesses that we helped to succeed and grow have since been acquired by large public companies.”

Limited liability companies affiliated with the O’Neil Group, acquired land and buildings near the campus to give it room to grow. During the past 2½ years, the limited liability companies have paid $9.15 million for buildings totaling 60,000 square feet at 545 E. Pikes Peak Ave., 422 E. Vermijo Ave. and 117 S. Wahsatch St. as well as 4.5 acres of former railroad right-of-way near Shooks Run Creek.

O’Neil wants to move tenants and demolish most of the three buildings on the land his company is acquiring to expand the campus and is still trying to buy more adjacent land for future expansion. He plans to put old railroad cars on the former railroad right-of-way, similar to the way Red Leg Brewery has used small metal shipping containers to house restaurants and food vendors to create an atmosphere that will attract talented engineers and other workers similar to the Lower Downtown (LoDo) and River North (RINO) areas of Denver.

The campus opened in 2015 with a focus on space and cybersecurity, and now it’s helping the Department of Defense bring technology developed by space-related startups into military programs more quickly. O’Neil Group affiliates bought the former Santa Fe railroad station and two adjacent buildings in 2014 for $4 million. It has spent more than $20 million remodeling and upgrading to make Catalyst Campus one of the most technologically advanced business parks in Colorado.

“We are providing an environment where the government has access to the traditional defense industry base, non-traditional commercially focused companies and academia to help accelerate the delivery of national security solutions to stay ahead of the evolving threat,” Catalyst Campus CEO Patrick Barrett said. Recent testimony before the Senate Armed Services Committee shows top military brass believe that model is working.

Gen. Glen Van Herck, commander of U.S. Northern Command and the North American Aerospace Defense Command, cited the Pathfinder program at Catalyst Campus as a “best practice for innovation at the Department of Defense.” Engineers working for startup companies at the campus are developing Pathfinder as a prototype for a new air command and control system that will replace six existing systems.

Catalyst Campus also is expanding into new locations beyond Colorado, opening a satellite office near the University of Maryland-College Park campus in February with plans to expand with more space in May 2022. The software “factory” is designed to bring new capabilities to the Navy using the same model of hosting teams from the defense industry, small business, government and academia that Catalyst Campus developed in Colorado Springs.

One of the newest tenants of Catalyst Campus is ONE Dev, a defense contracting company set up by the O’Neil Group and headed by Kevin O’Neil’s brother, Ken O’Neil, and Rob Patterson, a former top Braxton Science & Technology Group executive. Kevin O’Neil said ONE Dev will use the same strategy O’Neil Group used while it owned Braxton — buy defense companies and move them to Colorado Springs. O’Neil Group sold Braxton in October to Parsons for $300 million.