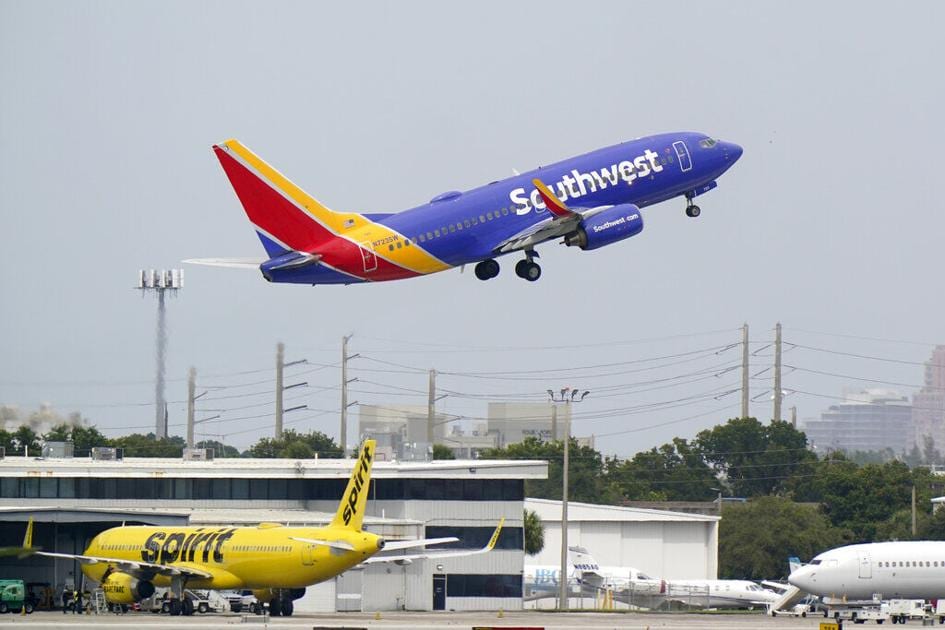 Southwest Airlines’ plans for Colorado Springs are no longer a mystery.

The low-fare giant announced last week that it would expand to Colorado Springs, but offered no details. But on Wednesday, it outlined its plans: 13 daily nonstop flights from Colorado Springs to five cities starting March 11.

The Dallas-based carrier will offer four daily flights to Denver International Airport, three flights to Dallas Love Field Airport and two flights each to Las Vegas, Phoenix and Chicago Midway International Airport. Greg Phillips, aviation director for the city of Colorado Springs, said the five destinations are major Southwest hubs and will give Colorado Springs travelers access to nearly all 100 cities the airline serves with just one connection.

Southwest began selling seats on the Colorado Springs flights Wednesday on www.southwest.com with a $29 one-way fare for the Denver flights, $59 for the Las Vegas and Phoenix flights, $69 for the Dallas flights and $89 for the Chicago flights. Tickets must be bought by 10:59 p.m. Nov. 4 for travel between March 11 and April 11, subject to restrictions on days of the week and some destinations.

Using fares for March 15 (the first date for which all Southwest’s promotional fares are available), American Airlines immediately cut its fares to Dallas-Fort Worth International Airport to match Southwest, while Frontier’s one-way fares to Las Vegas and Phoenix were $169 and $199, respectively, and United’s fares to Denver and Chicago’s O’Hare International Airport were $169 and $259, respectively.

“This is our chance to show we will fly Southwest. I recognize that will require a stop in some cases,” Phillips said. “If they are successful, we will see opportunities for additional flights. This is a tough time for Southwest and every other airline. For them to take this chance is a litmus test for Colorado Springs, and one I am 100% confident we will pass, but we have to put our money where our mouth is. If there are a bunch of empty flights here, this won’t last long.”

Southwest announced plans Oct. 22 to expand to Colorado Springs and two other cities, ending decades of courting by Springs city officials to bring the nation’s largest airline, measured by passengers carried, to southern Colorado. The expansions, including plans announced earlier to add seasonal service to Hayden and Montrose, are part of a larger strategy by Southwest to use idle aircraft and employees to generate more revenue.

Southwest’s arrival comes at low point for the Colorado Springs Airport and the entire aviation industry, with air travel continuing to recover slowly after declining sharply during the pandemic. Passenger numbers at the local airport fell in April to a low of 3,656, down nearly 94% from a year earlier. By August, those numbers had climbed to 32,692, but the September total was down to just under 31,000, down 58.7% from September 2019. Passenger numbers are expected to finish the year at 361,000, which would be the lowest annual total since 1982. Airlines in the Springs have responded by suspending service to Atlanta and Los Angeles  and reducing flights to the remaining cities.

Southwest will immediately become the airport’s largest carrier, both in the seat capacity and number of flights offered, Phillips said. The airline plans to use 143-seat Boeing 737-700 aircraft for its Colorado Springs schedule. For now, American Airlines is the largest carrier at the Colorado Springs Airport, based on seat capacity in the first eight months of the year, while United is the largest based on the number of flights and destinations offered — nine flights to Chicago, Denver and Houston.

Southwest has one of the nation’s most recognizable brands and inspires intense customer loyalty to its low-fare, few-frills strategy centered around making flying more fun and less of a hassle for passengers.