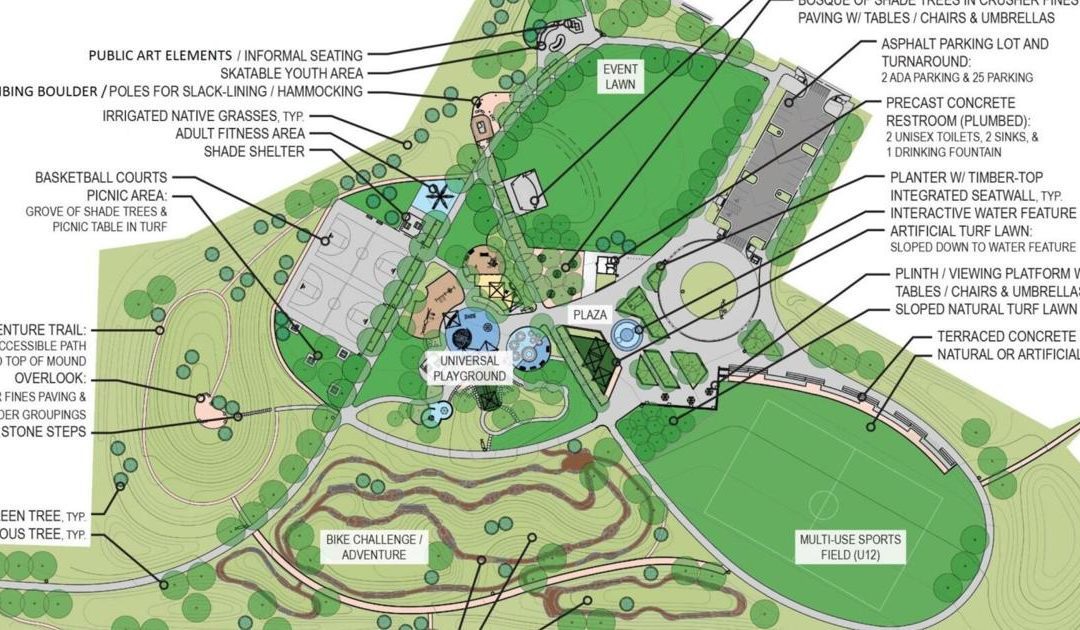 Panorama Park in southeast Colorado Springs is about halfway through a long-awaited transformation that will bring bike trails, basketball courts, a playground and numerous other features to what was once a largely flat and mostly vacant property.

The 13-acre park could open in May or June. So far it is on target to meet its nearly $9 million budget, said Connie Schmeisser, a landscape architect with the city of Colorado Springs. Crews are working from south to north on the property near Fountain Boulevard and Jet Wing Drive and have largely finished foundational dirt work. Some of the features are starting to take shape.

“This was a really flat park when we started and now we have got a lot of landforms,” she said.

For example, an overlook mound is planned for the southwest corner of the park, bike trails for all skill levels are going in adjacent to Panorama Middle School and a plaza will overlook the new ballfield.

Native vegetation selected specifically to thrive in the sandy soils and climate of the southeast sector of the city will be planted across much of the park, such as the mound and around the trails, to help conserve water, Schmeisser said. The staff expects to spend time on the detail of the plantings to ensure they put the right species in the right locations.

“We are really working hard to make a very successful community example,” she said.

The ballfield in the southeast corner of the park will be fully artificial, which also will save water.

Connie Schmeisser led a tour of Panorama Park this month for members of the RISE Southeast Coalition, a nonprofit, and Youth Advisory Council members. The group is gathered on seating that will serve the new multiuse ballfield.

Crews have poured two new basketball courts, and concrete features for skateboarders are expected to be done by the end of the year.

One of the upcoming construction milestones is the 1-acre universally accessible playground, Schmeisser said. Most of the equipment has been ordered and is waiting in storage to help avoid delays.

“Seeing that come to life is going to be so significant for the project,” she said.

A restroom and utility room also will be key because needed water lines will come in with them for a splash pad and an irrigated grand lawn. The lawn is expected to be one of the last pieces of the projects.

An ambitious two-piece mural that will go on the restroom is well underway, with 3,300 of about 5,000 tiles needed for the project complete, Schmeisser said. School groups are expected to finish many of the remaining tiles ahead of the installation, possibly in July, she said.

A second major art installation is planned for the park, funded by a $40,000 grant from the National Endowment for the Arts. The call to artists will go out early in the new year and the person selected for the job will work with the community on a vision for the piece, she said.

“We are purposefully leaving it open because we don’t want to limit what it could be,” she said.