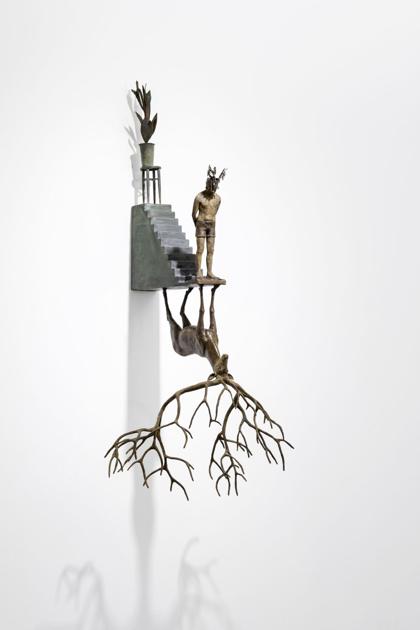 But the South Korean sculptor, who moved his family of four here in November, also creates small pieces. Those works will be featured in the new exhibit “My Scenery,” along with textile works by his wife, Hyewon Sim. It opens Friday at The Modbo with a free opening reception from 5-9 p.m., and runs through Aug. 27.

“Byeongdoo’s work (is) achingly beautiful,” said Modbo owner Lauren Ciborowski. “He clearly has a strong relationship with nature, and that, coupled with a deep sense of self, produces amazing, reflective art. This show is an opportunity for fans to enjoy smaller pieces than they’ve seen before — pieces that could easily fit into one’s home.”

The internationally known and award-winning artist creates his work with one question in mind: What is visible and what is invisible?

“The whole piece is made of boundaries,” he wrote in a statement about his intricately designed works. “Boundaries allow us to see into our imagination, between what is and what is not.”

His large deer sculpture, “I have been dreaming to be a tree,” was accepted into the 2017 Art on the Streets event and installed in the median at Colorado and Cascade avenues, where it still stands today. The following year, his piece “You, Light as a Cloud” was part of the outdoor art exhibition, and featured a giant cat perched next to a snipe on a bench near Boulder Crescent Park. This summer, his sculpture “Air or Water,” which features two large stainless steel fish swimming in circles around each other, hangs from the front of the Plaza of the Rockies building.

The first two sculptures were vandalized, including the theft of the snipe from his second piece. Both were fixed, and the snipe was replaced with a flock of Colorado-specific birds. The outpouring of sorrow and apology from the community, as well as the positive response to his works, helped convince Moon to move to the U.S.

“Colorado Springs should be honored that an artist of Byeongdoo’s caliber wanted to move here,” Ciborowski said.