Sounds Swampy: How the Wuhan Coronavirus and Some Stock Sell Offs Could Jeopardize the GOP Senate 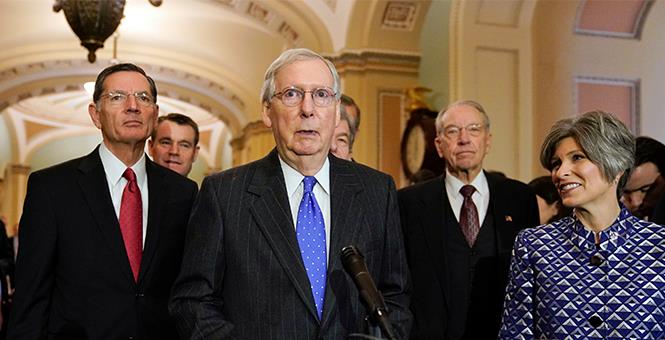 The Wuhan coronavirus pandemic is about to get very political on the Hill. Hopefully, it’ll just be a political sideshow, but it’s one that could come with investigations and possible legal actions against a slew of senators. It would appear that some, after receiving briefings on the virus, decided to dump millions of dollars of investments prior to the big drop we’ve seen on Wall Street. That’s pretty swampy. And it could be the thing that could put the Republican majority in the Senate in jeopardy come November. In some cases, senators dumped stock but also bought others that stand to benefit from the current crisis. Look, I’m a party guy. I’m a partisan. I’ll defend the GOP to the bitter end, but this is pretty bad.

At NPR, we have a story about Sen. Richard Burr (R-NC) telling a select few of his constituents how bad this Wuhan coronavirus outbreak could be and then decided to sell off some stocks as well. Apparently, this isn’t the first crisis in which he has acted this way (via NPR):

The chairman of the Senate Intelligence Committee warned a small group of well-connected constituents three weeks ago to prepare for dire economic and societal effects of the coronavirus, according to a secret recording obtained by NPR.

The remarks from U.S. Sen. Richard Burr were more stark than any he had delivered in more public forums

On Feb. 27, when the United States had 15 confirmed cases of COVID-19, President Trump was tamping down fears and suggesting that the virus could be seasonal.

“It’s going to disappear. One day, it’s like a miracle. It will disappear,” the president said then, before adding, “it could get worse before it gets better. It could maybe go away. We’ll see what happens.”

On that same day, Burr attended a luncheon held at a social club called the Capitol Hill Club. And he delivered a much more alarming message.

“There’s one thing that I can tell you about this: It is much more aggressive in its transmission than anything that we have seen in recent history,” he said, according to a secret recording of the remarks obtained by NPR. “It is probably more akin to the 1918 pandemic.”

The luncheon had been organized by the Tar Heel Circle, a nonpartisan group whose membership consists of businesses and organizations in North Carolina, the state Burr represents. Membership to join the Tar Heel Circle costs between $500 and $10,000…

In case it wasn’t obvious, Burr and Loeffler need to come forward with very compelling explanations of their behavior or they need to be expelled from the Senate

Digging through the stock sales disclosures tonight by Senators after a closed door briefing on January 24 about the Coronavirus threat. https://t.co/NAn0vNW0Zh

It looks like Jim Inhofe also sold stock after receiving the briefing about the seriousness of coronavirus.

Tucker Carlson calls out Sen. Richard Burr for selling stock when he learned how devastating coronavirus would be:

“There is no greater moral crime than betraying your country in a time of crisis.”
pic.twitter.com/K4Fc5kmMDK

Burr then sold off around $2 million worth of investments before the Dow Jones took a tumble (via ProPublica):

Soon after he offered public assurances that the government was ready to battle the coronavirus, the powerful chairman of the Senate Intelligence Committee, Richard Burr, sold off a significant percentage of his stocks, unloading between $628,000 and $1.72 million of his holdings on Feb. 13 in 33 separate transactions.

As the head of the intelligence committee, Burr, a North Carolina Republican, has access to the government’s most highly classified information about threats to America’s security. His committee was receiving daily coronavirus briefings around this time, according to a Reuters story.

A week after Burr’s sales, the stock market began a sharp decline and has lost about 30% since.

Sen. Kelly Loeffler (R-GA) has also been entangled in this Hill-centered intrigue, but has denied any wrongdoing (via Daily Beast):

The Senate’s newest member sold off seven figures’ worth of stock holdings in the days and weeks after a private, all-senators meeting on the novel coronavirus that subsequently hammered U.S. equities.

Sen. Kelly Loeffler (R-GA) reported the first sale of stock jointly owned by her and her husband on Jan. 24, the very day that her committee, the Senate Health Committee, hosted a private, all-senators briefing from administration officials, including the CDC director and Anthony Fauci, the head of the National Institute of Allergy and Infectious Diseases, on the coronavirus.

“Appreciate today’s briefing from the President’s top health officials on the novel coronavirus outbreak,” she tweeted about the briefing at the time.

That first transaction was a sale of stock in the company Resideo Technologies worth between $50,001 and $100,000. The company’s stock price has fallen by more than half since then, and the Dow Jones Industrial Average overall has shed approximately 10,000 points, dropping about a third of its value.

It was the first of 29 stock transactions that Loeffler and her husband made through mid-February, all but two of which were sales. One of Loeffler’s two purchases was stock worth between $100,000 and $250,000 in Citrix, a technology company that offers teleworking software and which has seen a small bump in its stock price since Loeffler bought in as a result of coronavirus-induced market turmoil.

As confirmed in the periodic transaction report to Senate Ethics, I was informed of these purchases and sales on February 16, 2020 — three weeks after they were made.

Sen. Jim Inhofe (R-OK) and Sen. Dianne Feinstein (D-CA) have also been identified as senators who sold stock days after a briefing on the virus back in January.

Investigations are coming. There’s no way to ignore this—it all looks very, very bad. It’s swampy. This is one of the reasons why Donald Trump was elected. Business, as usual, in D.C. has left quite the sour taste in the mouths of millions of voters. It’s why Bernie Sanders has been able to shift things on his side of the aisle. We’re in an era of populism in American politics, and voters can’t stand this sort of wheeling and dealing. Georgia could get interesting, and while Burr isn’t up for re-election in North Carolina, his colleague, Sen. Thom Tillis, is, and this could impact the race. There will be calls to resign. We’ll see what else drops from this debacle. With Colorado and Iowa’s Senate races, both with Republican incumbents, looking like they’ll be tough fights, this mess might have jeopardized the GOP’s chances to hold the Senate. Maybe. I hope not.