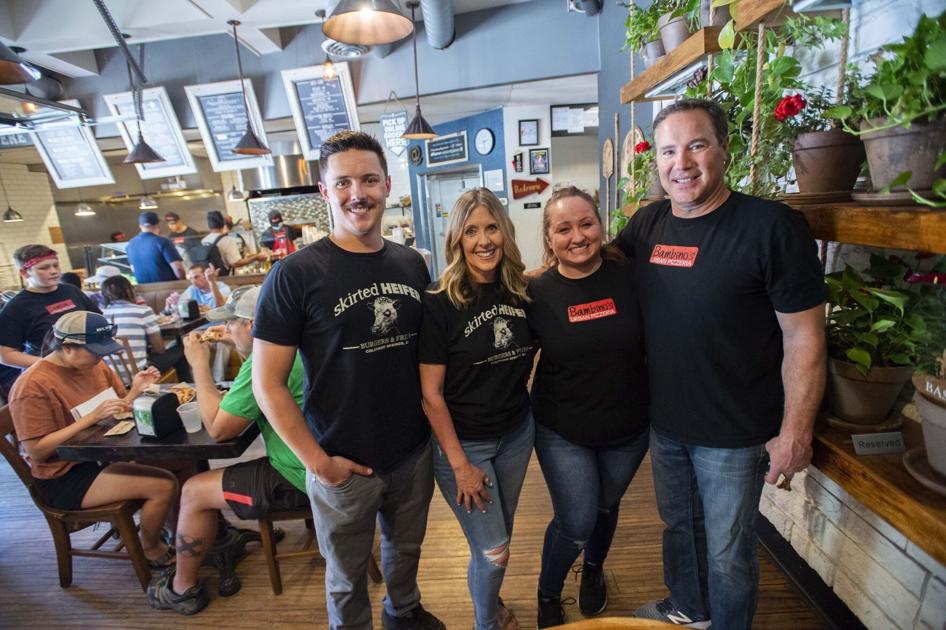 Barbara Ann Megyeri was a single mom with four children when, partly inspired by John Denver’s “Rocky Mountain High,” she moved in 1978 from Colorado Springs from Michigan.

In the Springs, she opened Bambino’s Pizzeria, which grew to four locations and earned her the name “Mama Bambino.” She died last summer at the age of 80, but the family business lives on and is transitioning to a third generation.

Kevin Megyeri was 16 — halfway through his junior year of high school — when his mom moved him and his siblings to Colorado. They would all grow up with Bambino’s — “each of the kids pretty much had their own location,” he says — with the Bambino’s Italian Eatery and Sports Bar at Circle Drive and Platte Avenue, run by Kevin and wife Suzette, outlasting the other sites.

They closed that longtime location, in leased space on the second floor of the now-demolished Tower Plaza strip center, in 2015 and reopened with a new concept and a new name — Bambino’s Urban Pizzeria — in a downtown building owned by the family. That came a year after they had opened another restaurant, the Skirted Heifer, on another side of the building. Their mini-restaurant empire grew again in 2019 with the addition of a second Skirted Heifer, owned by son Kevin Shane Megyeri, along Powers Boulevard on the northeast side of the city.

Now Kevin and Suzette are stepping back. In July, Kevin Shane will take over ownership of the downtown Skirted Heifer as well. He’s also assuming 67% ownership of Bambino’s; longtime manager Heather Blair will own the other 33%.

“It’s been a really fun journey,” Suzette says. But, she acknowledges, she and Kevin are tired. All those years at the former Bambino’s — running a busy restaurant, buffet and sports bar, and tackling all those stairs — were particularly draining, she says. For 20 years, “I don’t think we took more than a four-day vacation.”

“We just wanted to slow down and take a step back and pass the torch,” Kevin says.

Kevin Shane, 27, is happy to grab that torch.

“I kind of always knew this was where I was going to end up,” says Kevin Shane, who has a degree in economics and financing from Colorado State University, where he also played baseball. He served in every role in the family’s restaurants from dishwasher to manager before being trusted with the Skirted Heifer on Powers.

“The cool thing is the whole thing was my restaurant,” he says. His parents were with him every step of the way at the start, he adds, but within months were able to step away.

The Skirted Heifer was born from the desire to do something with the downtown building Barbara Ann had bought in 2006. “She always had the real estate bug,” Kevin says — and the urge to tackle a new concept.

“We’d only known Italian food,” Suzette says. But she cooked burgers at home — complete with a “skirt” of Wisconsin cheddar cheese — and they decided to run with that concept for “a little burger joint” downtown.

It was a concept that drew the attention of Food Network: The Skirted Heifer was featured on celebrity chef Guy Fieri’s “Diners, Drive-Ins and Dives.” That led to Suzette and Kevin Shane being invited to compete in “Guy’s Grocery Games.” Suzette was prepared to send an email thanking Food Network for the opportunity but saying at the end that they were simply too busy to take part. But Kevin Shane wasn’t willing to miss out.

“I said, ‘Mom, you delete that last line and send it,'” Kevin Shane says.

He and his dad had always had baseball as a common passion; he and his mom, though, had never competed together on anything. They proved to be a winning pair.

“We won our episode,” Kevin Shane says. “We killed it.” They then took second in the  tournament finale, winning $10,000.

His mom gave him all that money, “which was cool,” he says, “but I think the coolest thing that I won was her trust. Immediately after that was when they were like, ‘Hey, so you’re ready to open your own restaurant?’ “

The northeast-side Skirted Heifer has been “super successful,” Kevin Shane says, and has remained busy even during the pandemic; in fact, he had to add staff to keep up with demand. (Though these days, he, like others, struggles to find workers.)

Bambino’s and the first Skirted Heifer did suffer during the height of the pandemic; the Megyeris attribute that to downtown offices emptying, students staying home and tourists not visiting, resulting in no lunch crowd. The new Bambino’s fast-casual concept and greater focus on to-go helped keep it afloat, they say; the old Bambino’s, with a bigger footprint, the buffet and the bar, would not have been a good fit for pandemic times.

“Thank goodness we were able to survive,” Suzette says.

Now they’re ready to rest and enjoy their retirement at their new home in Salida. “It really is our happy place,” Suzette says.

But, Kevin says, “we’re not disappearing completely.” He and Suzette will always be available to help and they plan on quarterly meetings with Kevin Shane.

“I’m glad he’s taking over,” Kevin says. He notes that if Bambino’s lasts another seven years, that will mark a half-century for the family business.

“I would really like him to get there,” Kevin says.

Kevin and Suzette have been a team; he largely worked back of the house and Suzette worked up front.

“It just kind of came natural,” Suzette says. “What I wasn’t good at, he was good at, and vice versa. … The partnership with my husband has been really, really fun.”

Kevin Shane won’t have that enduring partnership, though he will have a partner in Blair as far as Bambino’s. “We work really well together,” he says.

His parents were always “super hands on,” but with three restaurants to oversee, he’ll be relying more on his managers — and on technology that helps him oversee those restaurants and their roughly 75 employees without having to be on site all the time.

As for the future, “when I just got out of college, I said I wanted 50 restaurants by the time I was 50,” Kevin Shane says. Then, after opening the Powers Skirted Heifer, he reduced that target to five. Now he feels three may be plenty to handle. He used to think those four-day family vacations were sort of the law — no more than four vacation days a year — but he does see the need for a work-life balance.

Still, he says, a friend has already talked to him about a potential site in Fountain.