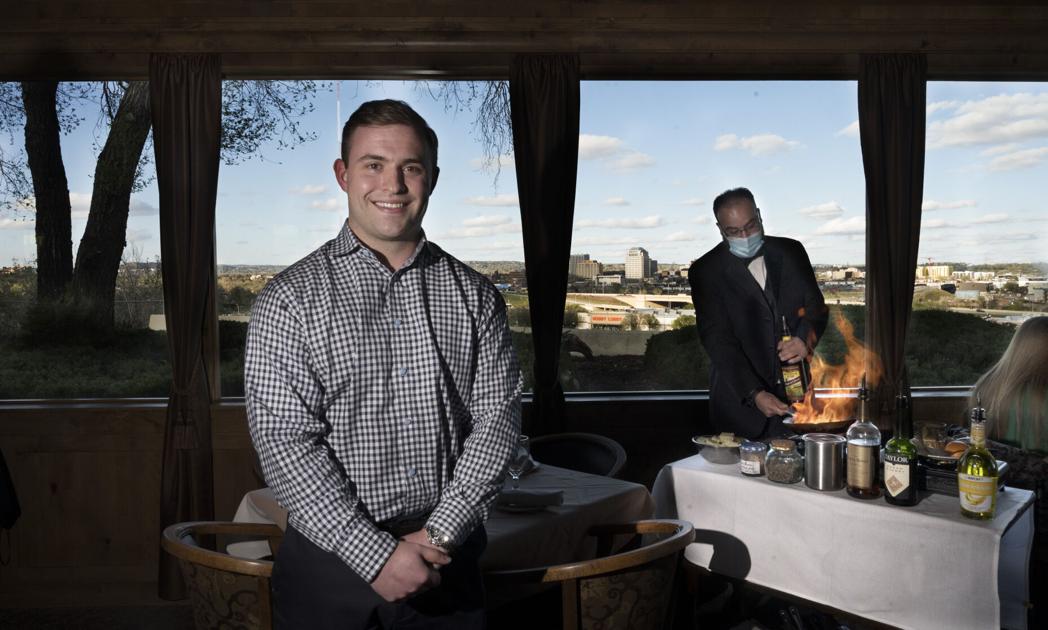 Max Levy is the epitome of the idiom about fruit not falling far from the tree.

Like his father Neil, Max has become an entrepreneur in his early 20s. And both ended up in the restaurant business — as owners of Swiss Chalet in Woodland Park and The Peppertree in Colorado Springs.

“I guess you could say I took a page out of Dad’s book,” Max said.

Neil moved to the Springs in the mid-1970s to open a retail store named Ardell’s that sold electronics, jewelry and household goods.

“If I know Dad, he was looking for a fun place to work,” Max said. “Restaurants and bars are fun places.”

After several years in the restaurant industry, Neil worked with a partner to purchase Swiss Chalet in 1999. That was the year the family moved to Woodland Park. In 2003, Neil and his wife, Paula, bought The Peppertree.

Today, Max is owner and general manager for both restaurants.

Joining the restaurant business was not in Max’s plans, but he had the background for an easy transition: Max loved going to work with his dad.

“As the oldest child, he was wise beyond his years,” Paula said. “Even as a toddler, he loved being with (his dad) so much that when Neil was working at MacKenzie’s Chop House, Max would get dressed up in a little sport coat and bow tie and head into work with Neil a few nights every couple weeks.”

Max recalls a newspaper article about his “working” at Swiss Chalet.

“When I was 5, The Gazette featured me in a story about how I helped at the Swiss,” Max said. “There was a picture of me wearing a white button-down shirt, black pants and a red bow tie, which I wore on evenings when I helped at the restaurant.”

He learned how the restaurants worked in those early years.

“I watched my dad,” he said. “I loved it. He did everything from fixing the toilets to hiring the employees. Now I’m doing the same thing.”

Still, Max had planned a career in business with a focus on technology and software. He earned a business degree from the University of Colorado in 2017, graduating with honors, and took a job with Oracle as a business consultant in Denver. He advanced quickly within the corporation.

Then, in February 2020, Neil was diagnosed with cancer. His illness led Max back to his parents’ home in Woodland Park. There, he, his mother and two younger brothers focused on Neil’s health, but seven months later, at age 66, Neil lost his battle with the disease.

“This has been a challenging year,” Max said. “It’s been a blur. With Dad being diagnosed and then COVID, it has been stressful.”

Despite the challenges, the family decided to keep the two restaurants on the same path. And the family’s longtime employees played key roles in keeping everything going.

“We had complete trust in them,” Max said. “They’re professionals. Some of them have been with the restaurants as long as I can remember.”

Max oversees the head chefs and general managers at each eatery. He also holds a day job as vice president and chief operations officer at Park State Bank & Trust in Woodland Park.

“I work at the bank and go to the restaurants in the evening,” he said. “We have been so lucky to have a core staff who have been with us for years. I do the marketing, advertising, financials and handle repairs.”

Paula founded and owns a nonprofit where she is executive director; Max’s brother Sam, 22, is studying to become a CPA at the University of Oklahoma; and brother Lou, 19, is a business administration major at the University of Colorado. All three brothers have worked in the eateries during summer breaks and holidays.

As far as the future for Max and the family-run businesses, “We have no plans to change what we’re doing here,” he said.

It goes without saying that Max’s mom is his biggest cheerleader.

“Max was driven even as a young boy with his schoolwork, with his sports participation, and then as he moved into high school and through college,” Paula said. “I think he received only one B the entire time at CU.”

“Max and his dad are similar in so many ways,” she continued, “and I see that as his work in managing the restaurants unfolds daily. The one way in which Max differs drastically from his father is that Max is a rule follower. Neil, as we joked all the time with him, was the president of the NRA, and in our house the NRA stood for No Rules Apply. Neil loved to just branch out and make up his own rules. Max, not so much.”

Longtime employees credit Neil’s leadership, and now Max’s, for their devotion to the job.

Joshua Martinez has worked at The Peppertree for almost 21 years, as does his father and, previously, his grandfather.

“Love Max!” Martinez said. “His work ethic is a lot like his father, Neil. He puts a lot on his plate and he’s always reliable. He had a lot to take on since his father’s passing. We’ve both had a lot to learn, and we promised his father we would carry on The Peppertree legacy and values.”

Katie Waite, who has worked at Swiss Chalet for more than 19 years and is now general manager, shares similar sentiments.

“Max has been such a great leader for us at the Swiss Chalet, always showing his appreciation for our great staff,” she said. “He’s supported us through a very hard year — reduced capacity, uncertainty, and his and our biggest loss of all, Neil.”

She points to all the extra hours he has put in, updating and making repairs to the eatery and doing everything he can to keep it successful.

“His love of the Swiss shows in his dedication to us,” Waite said. “He has the same high expectations for service and food quality as his dad. His positivity and appreciation for our hard work makes us all continue to take pride in our jobs and the service and food we put out. I think I can speak for all the staff that Max and Paula both make us feel like a part of the family.”