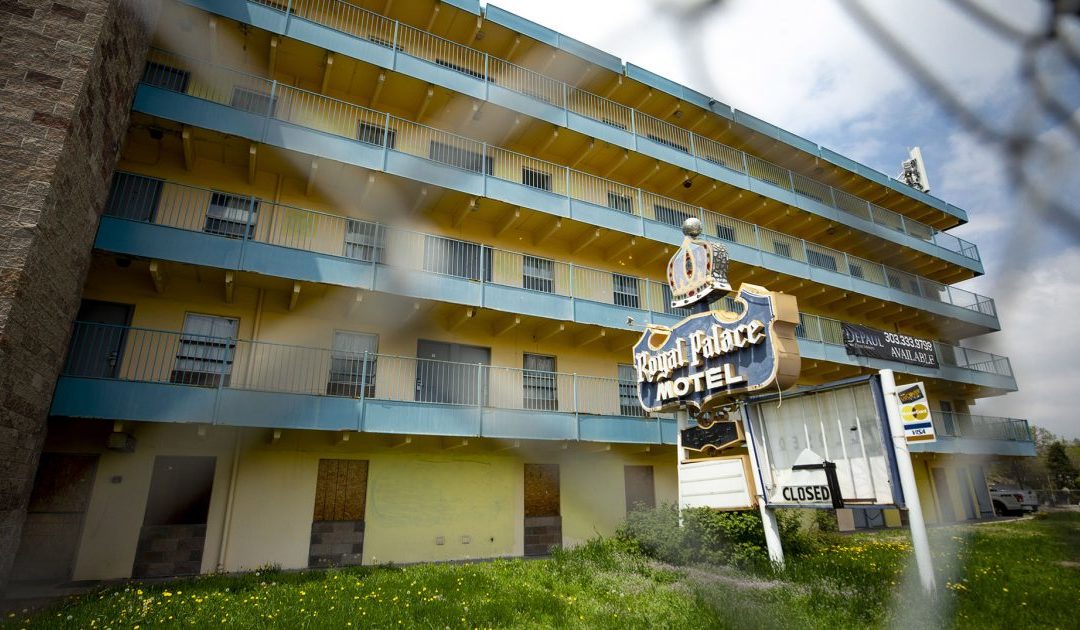 When it was constructed, the Royal Palace Motel was a gleaming symbol of modernity at the intersection of Colfax Avenue and Colorado Boulevard. It was 1969, a high point for motorists, motels and neon along Colfax. The Royal Palace occupied one of the busiest corners in town.

Its glimmer faded as the years went on and the storied avenue became seedier. The motel closed in 2013 and has sat vacant and boarded up ever since.

Some ideas for the property have been suggested in recent years. At a candidate forum in 2018, mayoral candidate Chairman Seku told a crowd that the city should turn the Palace’s empty rooms into space for people without homes. The city actually fielded a proposal to do just that, though there’s no indication the idea went anywhere.

But there are signs something may finally happen at 1565 Colorado Blvd. Last week, the motel’s owner filed a certificate of demolition eligibility with the city. It’s basically a document that says the landlord can apply to destroy or alter the structure any time in the next five years. It doesn’t mean something will actually happen, but it’s a sign that someone is thinking seriously about the Royal Palace’s future.

Jeff Oberg, whose D.B.T Ventures LLC owns the building, did not respond to questions about his plans for the site. D.B.T. Ventures bought the building in 2004 for $850,000.

When someone files a certificate of demolition eligibility, it sets off a research process to determine if a building is worth saving. City workers dive into buildings’ histories and report back to the public.

John T. Norton announced plans for the hotel in 1967. Conceptual drawings by architect Richard T. Crandall showed an ambitious agenda for the “twin, eight-story helical structures” built in an “expressionist” style that contained 300 rooms with balconies. Between the towers, they envisioned a “conical gourmet lounge” suspended in mid-air.

But that vision had been downsized by 1969, when an ad in the Denver Post announced a 70-room motel that looked more like its neighbors along Colfax.

“It is unknown why Norton’s original concept fell through,” the Denver Landmark report reads. “Given the scale of the motel proposed, the budget and complex engineering were likely an issue.”

Still, the Palace was an icon of its time. It embodied the “the golden era of motels along Colfax,” when the wicked avenue was motorists’ main route into town. Its eventual decline was symbolic of the ways I-70, which rose through Denver in the mid-’60s, affected Colfax.

“Tourists who had previously driven Colfax Ave. through Denver now had the option to bypass central Denver and continue to the mountains or to stay at new chain hotels established along I-70,” the Landmark report says. “However, development along E. Colfax in Denver continued during the 1960s.”

Meanwhile, the city worked to push sex shops and topless bars out of its downtown corridors. Many of those businesses reopened on East Colfax, bringing a new character to the street as tourists took other routes into town.

“Colfax became known as a crime-ridden street,” a Denver Post reporter wrote in 1993. “It has never been able to shake that image.”

The Royal Palace’s reputation turned with the neighborhood. It was the site of a still-unsolved murder, when a man named John Eggers was found shot in a room by a staffer in 1998. Its only review on Yelp, from 2010, describes the motel as “very icky.”

“Even though this motel was cheap, I do not advise that anyone stay here,” reviewer Jessica S. wrote. “I opted to sleep in my clothes.”

No matter how yucky it became inside, the Royal Palace’s exterior has continued to capture nostalgia. In particular, a group of Colfax preservationists have angled to save its funky sign. It’s a mash-up of ye-olde script and ’60s flare, a blue-and-gold crest beneath a crown topped by a disco ball.

Jonny Barber, a champion of Colfax history known as the “Velvet Elvis,” said he’s been talking with Oberg, the owner, to preserve the piece. It’s part of a broader effort to “save the signs.”

“I’d probably be happy with just the disco ball, I think it’d be amazing,” Barber told us.

He said Oberg was open to working something out, he just had to nail down some details. Our conversation was the first he’d heard of any movement for the property.

We’ll update this story if we hear back from Oberg.