Someone claimed a driver ran a red light in a small Colorado town. That’s all it took to get a ticket. 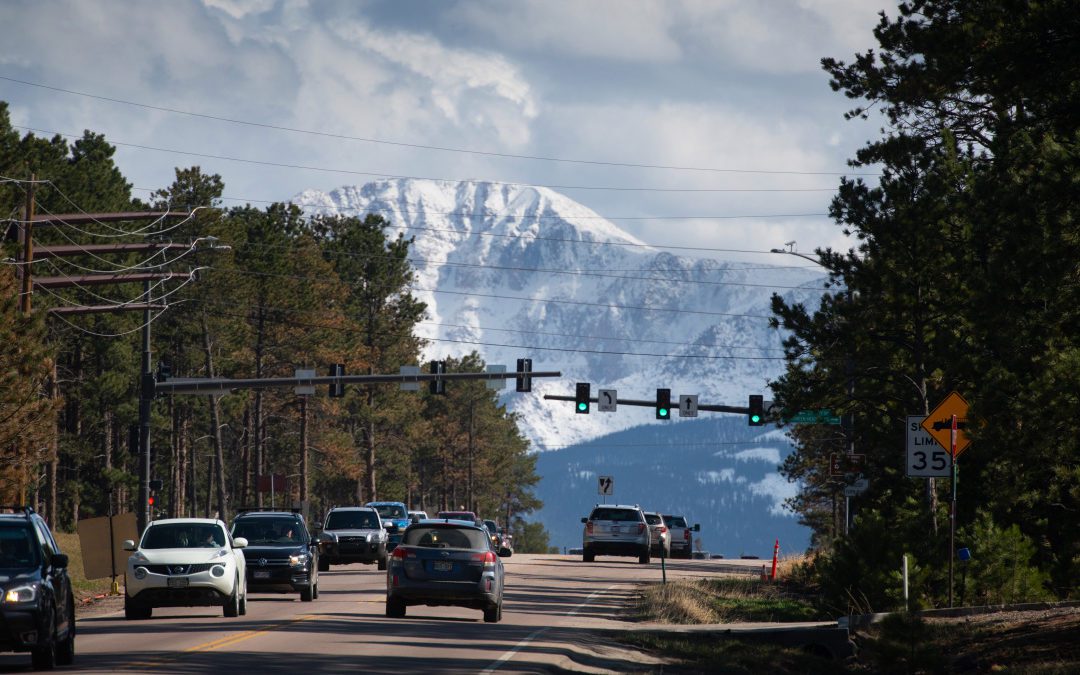 Jake Turnbull managed to anger a local within minutes of driving his sporty Suzuki Sidekick into Woodland Park.

Turnbull, 28 and living in Colorado Springs, was cruising through the picturesque small town on the north slope of Pikes Peak a few weeks back, his fiancée and pup along for the ride with plans for an afternoon hike in the spring sunshine.

What happened at the intersection of Highway 67 and Evergreen Heights Drive — whether the light was yellow or all-the-way red; whether Turnbull twice flashed his middle finger at a guy laying on the horn of his Jeep — that’s now all fodder for his upcoming trial.

There wasn’t a police officer in sight when it happened. But in Woodland Park, that doesn’t matter. Turnbull got a ticket for running a red light anyway.

The $120 traffic violation, worth four points on his driver’s license, is what the town calls a “citizen-signed complaint.” A person who sees what they think is a traffic violation can call police and provide details after the fact about what they saw — suspected intoxicated drivers, speeding, blown stop signs and traffic lights. Police write up the ticket, but the citizen-witness has to sign the complaint and agree to appear in court to testify, should it come to that.

Drivers report other drivers in plenty of other towns and cities, too. The difference in small-town Woodland Park is that police actually have time to respond to all citizen-alleged violations.

The Woodland Park Police Department gets about 30 calls each month from people complaining about other people’s driving, according to police logs. “We respond to every one. We have very high customer service,” said Jennifer Tobias, dispatch manager for the department in the town of about 8,000. “Our duty in law enforcement is to investigate the complaint.”

Most of the time, when the complaining citizen finds out it’s their name that will go on the ticket, they drop it.

But not on April 6. Turnbull, who works as an operating room assistant in a children’s hospital, was headed to the local Division of Motor Vehicles office to pick up another temporary license plate for his newly purchased Sidekick. He took the short road trip to Woodland Park because, unlike in Colorado Springs, the local DMV didn’t require reservations.

He planned to pop by the office, then enjoy the day hiking with his fiancée, Rose, and their pooch, Carmen.

Turnbull says the stoplight in question was turning yellow as he went through the intersection, that he was “past the point of no return” and it was too late to slam on the brakes. A man behind him in a Jeep honked aggressively and, according to that man’s report to police, Turnbull flipped him off. Twice.

The guy in the Jeep, a former Teller County sheriff’s deputy, followed Turnbull into the parking lot of the DMV and wrote down his temporary plate information. Turnbull said in an interview with The Colorado Sun that he didn’t realize what the other driver, William Sipes, was doing, but definitely noticed that he was following him.

“Wow, this guy is really angry,” he recalled saying to his fiancée. “He’s inches from my bumper.”

Sipes got the plate number and drove away, headed to work. Turnbull went to take care of his paperwork at the DMV.

When Turnbull returned to his parked vehicle about 30 minutes later, two Woodland Park police officers were standing next to it. They asked him if he recently had “an altercation.”

At first, Turnbull didn’t know what they were talking about, he said. The officers were friendly and asked to pet his dog, but told him “you can pay the money or duke it out in court with this guy,” Turnbull recalled.

“I was like, ‘I’ve never heard of this. This doesn’t sound right,’” said Turnbull, who was shocked he could receive a ticket for a traffic violation when the only proof was the word of another driver. “If this ticket was $1, I’d go to court.”

Turnbull has reached out for legal advice on social media, asking how citizens can ticket other citizens. What if someone called the police on another driver simply because they had a vendetta against that person, he wondered? Or because a driver looked “suspicious” because of their skin color or their tattoos?

“It’s like a dystopian town where you are being watched 24/7,” Turnbull said. “It’s dangerous, honestly.”

Sipes declined an interview request, saying he wanted the ticket to speak for itself. In his statement to police, Sipes wrote that Turnbull’s SUV entered the intersection after the light turned red. “I honked my horn and I saw the male driver stick his hand out and flip me off,” he wrote.

Sipes said he plans to show up for the trial later this month, when it will be one man’s word against the other’s.

In Denver, citizens can report a traffic violation but they must have proof — a video or photo — before an officer will issue a citation, said Jay Casillas, public information officer for the Denver Police Department. Citizens don’t sign the ticket but are listed as witnesses.

“While we do have a process, it is rare that this occurs,” Casillas said.

That’s similar to how it works in Colorado Springs and at the Colorado State Patrol. The agencies regularly get calls about suspected drunk drivers, or reckless drivers, and, if possible, officers try to catch the driver in the act and issue a ticket. If not, they take witness statements and determine whether to issue a citation, based on the evidence.

In Colorado Springs, whether an officer would respond to such a call depends on how busy they are, Colorado Springs police Lt. Jim Sokolik said. If a citizen calls police to report a reckless driver who is running red lights, dispatchers might broadcast the information for any officer in the area to respond, he said.

Even in Woodland Park, the citizen-signed ticket is rare, with about five or fewer issued each year, according to the police department and the local traffic court, neither of which track the specific number.

The town has 23 police officers on staff, with a couple on patrol at any given time. Woodland Park received 316 reckless driver complaints in 2020, plus 30 reported drunk drivers — meaning a person saw someone drink alcohol and get into the driver’s seat.

Turnbull returned to Woodland Park for his first court appearance last week. After waiting about three hours, he was told to pay the fine or show up for trial later this month.

He again refused to pay the ticket, which is the first one he’s received in his life, he said. When Turnbull posted about the citizen-signed infraction on social media, he received hundreds of comments, including offers to set up GoFundMe accounts to pay his legal fees and offers of free representation. He was advised to deny any wrongdoing, since the only evidence against him is another driver’s word.

The day he got the ticket, Turnbull and Rose were too upset to go hiking. They opted instead for a 15-minute walk with their dog, and then Rose said, “Let’s get out of Woodland Park and never come back.”

That’s still Turnbull’s plan — except for the trial, where he must appear or face the possibility of an arrest warrant.