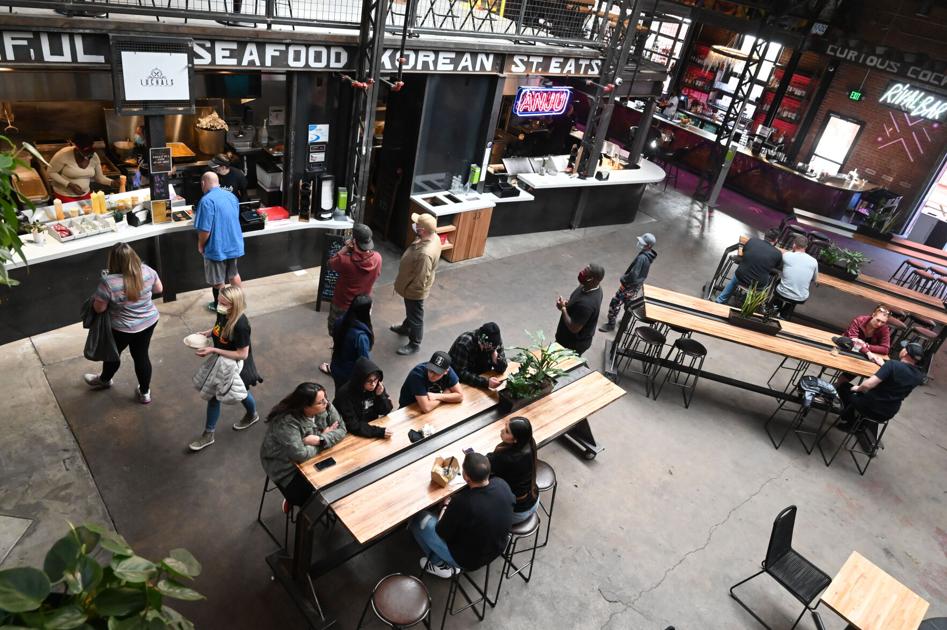 Some owners of large commercial spaces no longer are thinking big.

Unable to fill expansive areas with a single-use store or restaurant, and wanting to offer a variety of retail and entertainment concepts, several Colorado Springs commercial building owners are transforming their properties — including historical downtown structures — to create smaller spaces for multiple users.

A North Tejon Street building that was the longtime home of Zeezo’s costume, wig and magic shop is being eyed for four restaurant and entertainment concepts, says a local ownership group. The group also has turned another Tejon Street property into three uses and has purchased a third building along the corridor where it plans another mix of tenants.

And a portion of the Trolley Building on South Tejon opened last fall as the CO.A.T.I food hall, with nine food, beverage and dessert concepts and common seating areas. CO.A.T.I follows the remodeling of the building’s south end, which opened 2½ years ago with its own mix of food and beverage choices.

“When you go out with your friends, not everybody wants to eat the same food, not everybody has the same budget, nor does everybody have the same appetite,” said Joe Niebur, who heads a Springs-based development firm that remodeled the Trolley Building — so named because it once housed a trolley car barn.

“So, they want to see their friends and you don’t know who you’re going to see at CO.A.T.I because you’ve got all the different varieties of food,” Niebur said. “Every day is a new day.”

The idea of breaking up large buildings into smaller spaces isn’t new. A shuttered Kmart on North Nevada Avenue, for example, was remodeled into a VASA Fitness center and the RoadHouse Cinemas movie theater complex. A portion of the former Sears store at the Broadmoor Towne Center on the south side recently was turned into a Magnum Shooting Center, and the building’s owners have created additional spaces for other uses.

But as increasing numbers of national and regional brick-and-mortar retailers and restaurants downsize or close locations, some commercial property owners find it difficult to attract a single user to take their space, particularly in downtown Colorado Springs.

“Looking at the physical footprint of restaurants and retail, the reality is, they’re getting smaller, which is not a bad thing,” said Alex Armani-Munn, former economic development specialist for the Downtown Partnership, an advocacy group for the area. “The challenge is that, for us, and a lot of historical urban markets, existing real estate and our existing footprints are really large.”

The former Zeezo’s building at 112 N. Tejon, which land records show was constructed in 1900, is one such space, Armani-Munn said. The building is roughly 18,000 square feet, with a basement, first floor and mezzanine.

“To find a single tenant, especially a retail tenant, you’re never going to find a retail tenant to fill that large of space,” Armani-Munn said. “In theory, somebody like an REI or a Patagonia or a North Face store, something like that would fill a space that large. But our downtown market isn’t at the point where we’re attracting those large, flagship national retailers.”

Building owners Brent Baldwin and Derek Cohn have planned multiple concepts for the former Zeezo’s property since their investment group purchased it in 2019. A Texas-based dueling piano bar was expected to take one portion of the space, but has scrapped its plans; Baldwin said he and Cohn now expect four concepts to occupy the building.

Dog Haus Biergarten, a restaurant known for its hot dogs that has a north-side location, will take 4,000 square feet, Baldwin said. He and Cohn also are talking with a microbrewery, a high-end cocktail bar and an entertainment concept that has a location in another market.

Costs to own, operate and maintain the building continue to climb, and rents paid by more than one user will help generate revenues to cover those mounting expenses, Baldwin said.

The synergy created by a mix of four restaurant, bar and entertainment uses also will help attract customers who want a variety of options under one roof, he said.

“As a property owner, we’re diversified,” Baldwin said. “We have three, four different concepts versus all your eggs in one basket. It’s really what the consumers want. It’s what other markets are doing.”

Baldwin and Cohn also have transformed the building at 218 N. Tejon St., which they purchased in 2018 and that had been home to the Paris Crepe restaurant.

“Rather than one tenant trying to do breakfast, lunch and dinner, you have Bird Tree Cafe doing breakfast and Mood doing lunch and dinner and you have district elleven doing cocktails in the evening,” Baldwin said. “They’re able to utilize the space throughout the entire day.”

Baldwin and Cohn have a third multiuse venue planned; they’ve purchased the building at 32 S. Tejon that housed the Thirsty Parrot Bar & Grill, which closed last year. They now envision a coffee shop and meeting space, high-end restaurant, cocktail lounge and music venue in the building.

“Those Office Depots and some of those are going to an online presence,” Baldwin said. “Those tenants are going away, and you’re looking at smaller locations. You have a lot more users wanting 1,500 or 3,000 square feet.”

Ochs family members initially were open to a single user for the nearly 14,000-square-foot space, Charles Ochs said. The Cheesecake Factory and the Spaghetti Factory — national and regional chains — considered it, but passed because renovations would be expensive and they didn’t care for the building’s long, rectangular layout, he said.

Three to four years ago, the family began to pursue its own ideas for the building, with the goal of preserving its railroad history, Ochs said.

The family hired a restaurant management company, which developed new restaurant concepts, Ochs said. At the same time, the Ochs family spent nearly $3 million to renovate the building, he said.

“When you have an old building, we had to redo all the HVAC (heating, ventilating and cooling), the plumbing and then you have all sorts of structural issues that you have to address and the new concepts had to be installed,” Ochs said.

“It was not a light decision, but we felt committed, not only to the building, but we felt committed to the history and to honor the memory of the Denver & Rio Grande Railroad and Gen. Palmer, our founder (railroad and Colorado Springs founder William Jackson Palmer),” he said. “It was viewed that we would set this thing up to be enjoyed for many years.”

In late 2020, three new restaurants debuted in the building: Brakeman’s Burgers, which specializes in craft hamburgers, milkshakes and craft beers, among other items; Track Ten Urban Kitchen, whose upscale menu includes steaks, lamb, chicken and fish; and The Sandwich Depot, which serves breakfast fare and sandwiches.

Each restaurant — accented with streetlights, signs and other historic items — has its own entrance and operates independently; the family owns the restaurants, which are operated by the management company, Charles Ochs said.

The renovation has paid off, Ochs said; the depot’s general contractor, iiCON Construction of Colorado Springs, won a pair of awards from the Rocky Mountain chapter of the Associated Builders and Contractors trade association for its work on the historical building, along with an award last week from the association’s national office.

Niebur, the Trolley Building owner, said restaurants at CO.A.T.I are on short-term leases. Some have been food truck operators, and leasing small spaces at the food hall gives them a chance to launch their businesses and fine-tune their concepts, he said.

“Ours is more of an incubator,” Niebur said. “We don’t do any long-term leases with our guys. … The guys that we bring in there, most of them don’t have a lot of money and it’s a new concept, and we’re giving them the chance, the opportunity to start up their own business.

Not all newly converted multiuse buildings are downtown.

Eight years ago, the old Ivywild Elementary School on South Cascade became a mixed-used project, highlighted by the move of the Bristol Brewing Co.’s pub and brewery into the facility.

John Rodgers, president and owner of Peak Commercial Properties in Colorado Springs and who proposed the Lincoln School conversion, said it’s possible the building could have been redeveloped to accommodate a single large user.

Doing so, however, might have meant waiting years for an elusive big tenant to come along, with no income being produced during that time, he said.

Converting the building into multiple spaces had its own challenges, Rodgers said.

Pikes Peak Regional Building Department officials, Colorado Springs city planners and nearby residents all wanted to know who would fill a mixed-use, neighborhood building — a question Rodgers said he couldn’t answer at the time he proposed the concept and one that wouldn’t be known until the first tenants signed up.

Finding those tenants also can be problematic — determining the demand for a new mixed-use concept and competing with traditional shopping centers, he said. Redevelopment costs for multiple users also can be expensive and rents must justify the investment for such a project, he said.

“Unless you want to take a very big risk,” Rodgers said.

The Lincoln Center project, however, has done well, he said.