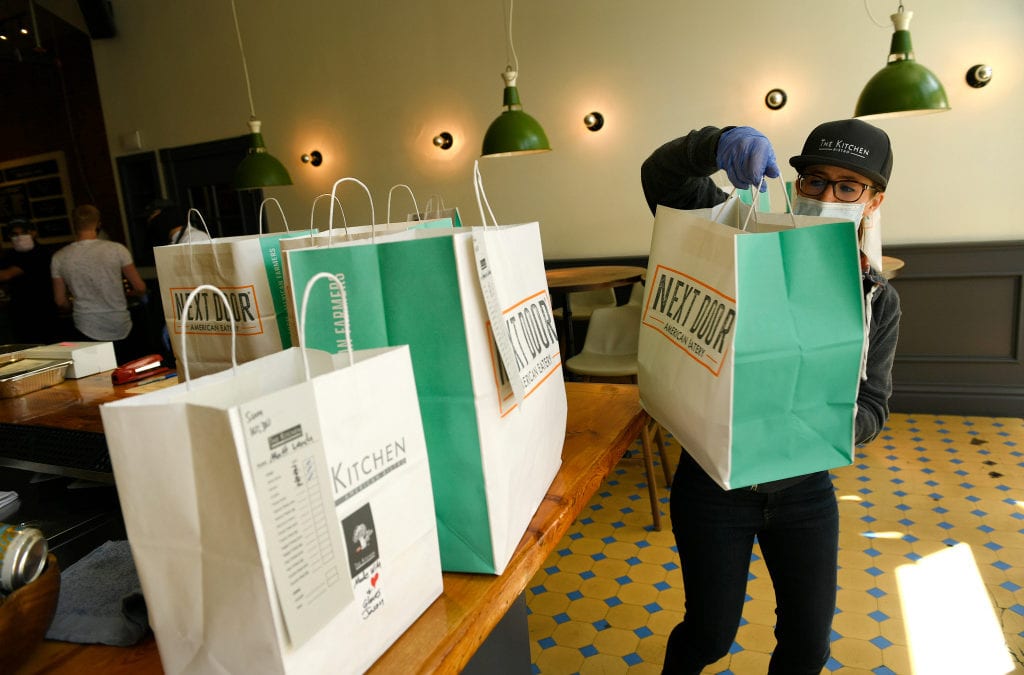 Even as Colorado Gov. Jared Polis eases restrictions, allowing dine-in service to resume as it has in several other states, Colorado restaurants aren’t all rushing to open their doors.

Over the holiday weekend, Polis set a restaurant reopening date of May 27 and released guidelines for restaurants to allow them to operate at a maximum 50% capacity — but with no more than 50 patrons inside — with tables spaced six feet apart and only parties of eight or fewer allowed.

Mayor Michael Hancock on Monday said that Denver, too, could reopen its restaurants Wednesday alongside the rest of the state, adding only that diners as well as restaurant employees would be required to wear masks “except while eating and drinking,” according to a city release.

With two days notice, restaurant owners scrambled to decide when and how to reopen, with some opting out altogether for another week or more.

“I know many places are trying to normalize all the reminders of a pandemic situation, but I cannot get behind that,” Christine Parisi, president of Parisi and Firenze a Tavola on Tennyson Street, told The Denver Post.

“Rules, masks, signage, side eyes from other customers watching everyone’s move, constant sanitizing sessions, varying degrees of the public’s reaction to the requirements of the public … all make for a tangled web of very uncomfortable scenarios for a small business and my staff,” she said.

Parisi said she would hold off on any scaled re-openings until Monday, June 8. Other owners have set their own opening dates throughout the next month, and now the focus shifts to training staff.

“A lot of this does not have to do with the restaurant being physically ready,” said Linda Hampsten Fox, who owns The Bindery in Lower Highland. “I think psychologically and emotionally, we’re going to use this time now to really get the team ready.”

Hampsten Fox and about 75% of her pre-coronavirus team have been working throughout the pandemic on designing new table layouts, creating an indoor-outdoor dining space and installing a greenhouse in the restaurant’s bakery and market to bring the outdoors inside, and vice versa.

They’ll take advantage of existing patio space and wrap it around the restaurant but will still only be able to seat as much as 50% of their previous capacity, she said.

“This story is not ending, we are still in a pandemic … It’s the next two, four, six months that’s going to really be important to all of us (restaurants),” she said.

During a Tuesday press conference, Polis said he wanted to “acknowledge the pain that our restaurants have been through.”

Restaurants employ around 300,000 workers or 10% of the state’s workforce, according to data from the Colorado Restaurant Association. In a poll taken by that association earlier this month, more than 100 Colorado restaurants reported that under the new guidelines, they will still have to consider closing permanently in less than three months.

Longtime restaurateur Frank Bonanno owns 10 Denver concepts plus a major downtown food hall. And while he is opening some of his restaurants on Wednesday, he says he’ll be facing big decisions later this summer about which of them to keep alive as soon as his Paycheck Protection loan runs out.

“Obviously the restaurant industry was a bigger industry than most people thought, quite honestly,” Bonanno said. “People just don’t realize because we’re not a big lobbyist group. We don’t ask for a lot of help. We kind of fly under the radar, and now people are realizing … .”

In the same way that Gov. Polis transitioned from stay-at-home order to safer-at-home recommendation, he’s asking Coloradans now to make the best decisions for themselves regarding dining out. He acknowledged that there will be some risk in going out to eat now, “but I think for our state, it’s a matter of survival, and really it’s a matter of when — not if — we want to do it in as safe a way as possible,” he said.

As safe as possible means more for Whitney Ariss, co-owner of The Preservery, than state and city guidelines require. Starting next Tuesday, she’ll open her restaurant at 30% capacity, using all disposable dishes and serving ware and only allowing dining groups of four or less.

“We’re really letting our team guide us in terms of what makes them feel safe and comfortable in this new world of ours,” she said. “I think just trying to make it ridiculously clear, from a visibility standpoint, what our expectations (of customers) are … being really really verbal on social media as well … and inundating people with information is our initial approach.”

For Ariss and others, their own guidelines are clear, while their customers’ are not. “We just know that there’s gonna be a lot of pushback from guests, and I think that’s the scariest part of all of this,” she said.

After seeing footage of massive holiday crowds at restaurants and other public spaces all over the country this weekend, Bonanno agreed. He said he and his employees will be paying attention and asking customers to comply with distancing, mask-wearing and more protocols.

“Believe me, we don’t need to close again in September or October because this has come full circle,” he said. “We don’t need to be the Ozarks, so we’re going to do our part.”