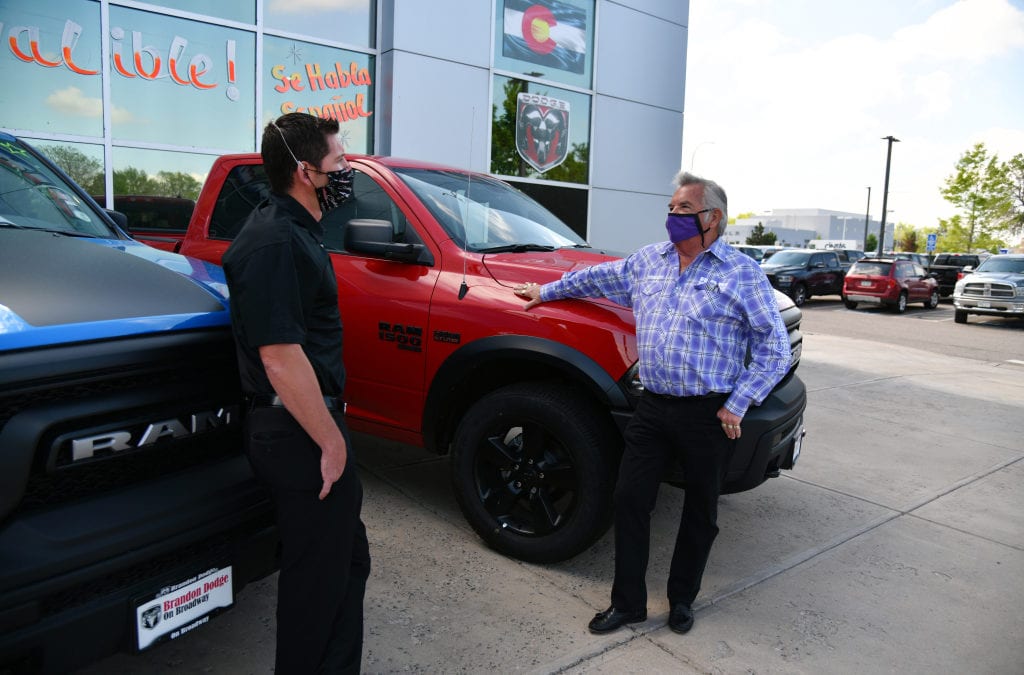 Colorado’s automobile dealers have reopened their showrooms again, but anyone looking to buy a car or truck shouldn’t expect business as usual.

“Our belief is that the landscape has changed permanently in some ways. So much of our business, 95%, was done in the showrooms. I don’t think it will ever get back to that,” said Michael Dunlap, vice president of business development for the Schomp Automotive Group, which has three locations in Arapahoe County and three in Douglas County.

Auto dealerships provided an essential service under the state’s stay-at-home order, and parts and service departments remained open. Showrooms closed to the public, although buyers could complete most of the purchase remotely and schedule a visit to complete a deal.

“We were open for a long time by appointment. We sold one, two or three cars a day. That is way off what we would normally do,” said Lee Payne, owner of Planet Honda, Planet Hyundai and Genesis of Golden.

If dealerships didn’t have systems to handle remote transactions, they quickly put them into place. Only two state-required forms need a “wet” signature, and entire transactions can be done remotely, Payne said.

And more customers are starting to prefer it that way. Dunlap estimates about half of his transactions going forward will be done remotely and half in-person.

“We are perfectly fine with that,” he said.

Showrooms largely reopened in early May under the looser safer-at-home guidelines. But to create social distancing, workplaces can only have half the staff they had before the pandemic.

A dealership that might have had a dozen sales staff will run with six, said Doug Moreland, owner of Moreland Auto Group, which has locations up and down the Front Range, in Wyoming and Las Vegas.

Limited staffing means reservations will likely continue in the months ahead. Consumers who just show up may have to take a number or schedule an appointment and come back later. Although if it is a slow day, they might get in immediately.

Too many bodies on the lot are likely to trigger a stress reaction on the sales manager’s part, the exact opposite of what it would have done before the pandemic.

As is the case at other retail locations, employees at dealerships are now wearing masks and offering them to customers who show up bare-faced. Technicians will come in and clean spaces after people have left. And any vehicles purchased will be disinfected on the way out.

Social distancing also means no more having to play hide-and-seek on the lot from sales staff looking to meet their quota. But there are far fewer tire-kickers looking for something to do on a Saturday afternoon, dealers said. The people who show up are typically ready to do a deal.

“If they are venturing out to a car dealership, they are seriously interested in buying a vehicle. Why risk the exposure?” said Moreland.

Nor can people test drive cars at the Denver Auto Show. For the first time in 44 years, it won’t be held.

One of the biggest changes consumers will notice involves the test drive. People aren’t expected to buy a car without driving it, Payne said. But a sales adviser will no longer ride shotgun to explain features, point out a route and above all, make sure customers came back.

“That is the one area where we can’t control separation,” said Payne, who has put up plexiglass barriers in sales offices. He considered doing the same in vehicles, but it wasn’t practical or safe.

Dealerships will photocopy a customer’s driver’s license and insurance card and do their best to verify identities. And then they will cross their fingers.

“We do our best to make sure they are who they say they are,” Payne said. “We have been really lucky. We haven’t had a lot of issues.”

Tim Jackson, president and CEO of the Colorado Automobile Dealers Association, said one dealer told him he had to file a police report after a vehicle disappeared on a test drive. Some dealerships, if they are uncertain about a customer, will tail him or her on a test drive.

CADA, after years of recommending accompanied test drives, now advises all test drives should be solo.

“If you allow customers to do a test drive, do not put someone in there with them,” Jackson said.

Moreland said he hasn’t had problems with solo test drives, and that fraud attempts were actually more frequent when showrooms were closed. Some scammers viewed remote transactions as an opportunity to buy under a false identity.

“We experienced a lot of fraudulent activity. We had people who were not the people they alleged to be and trying to get possessions of cars,” he said.

The lure of incentives

Besides marketing a safety message, auto manufacturers are offering significant incentives to help bring consumers back out. Zero-percent financing, for up to 84 months in some cases, is a common one. Many are also waiving payments for the first three or even six months.

“There is pent-up demand. It has started to come back quite a bit,” said Jackson.

Motor vehicle sales nationally were down 25.7% in March, but a smaller 12.4% in April. May should see an even smaller sales decline as restrictions lift in more locations.

Across the board, March and April were tough months, upending what had been a good start to the year, Moreland said. But May sales have rebounded and are on track to surpass year-ago levels in a couple of locations, he said.

Closures, however, have or will soon create inventory issues. Auto search engine iSeeCars estimates that the reduced sales in March and April are contributing to an overhang of 2019 models, which account for 10.8% of new auto inventory nationwide. Metro Denver ranks 17th highest out of the 50 largest metros with 10.6% of new cars a 2019 model.

With the financing deals now available, Moreland said some of the new 2019 models are now cheaper in payment terms than a used 2019 resale with an outside loan.

Dealers, however, aren’t worried about 2019 overhang. They see a different problem coming. Factory closures mean that the most popular models could run out of stock in the coming weeks and delay the arrival of 2021 models. Motor vehicle orders plunged 52% in April. And while they are expected to rebound, the supply line may not be consistent.

“Load the lot with as much inventory as I can handle has been my philosophy,” Moreland said. “We can take everything the factory can give us.”

Payne said high demand on more popular models could push manufacturers to selectively pull back the incentives they are providing.

“If they see the market recovering, why would they throw more money at it,” he said. “I expect the incentives will tighten up in June from where they are now.”

While the next few months may show a rebound, the sustainability of future sales is a question in the mind of dealers. About 41 million U.S. workers and independent contractors have filed for unemployment since mid-March, including nearly 500,000 in Colorado. A growing number of consumers simply are no longer in a position to buy a vehicle.

During tough economic times, buyers tend to gravitate towards used cars and trucks, which are more affordable. And while the decline in new purchases has meant fewer trade-ins, several sources of additional used car supply are opening up.

Hertz has sought bankruptcy protection and is expected to unload thousands of used cars at discounted prices in the months ahead. Given that leisure and business travel will likely remain subdued for months to come, other rental car companies are expected to shed inventory as well.

During the pandemic, dealers have extended expiring leases.If prices drop enough, people leasing vehicles may turn them in, adding further to the used car inventory.

Some of the temporary furloughs and layoffs will likely turn into permanent job losses. And unless Congress steps in, government assistance will wane over time. That could push more distressed consumers to raise cash by selling vehicles they can no longer afford the payments on.

“We are selling more used vehicles than new in both our stores,” Payne said. “We also do a fair amount of acquisition from the public. There is a lot of interest from people who want to sell their cars.”

But Jackson sees a countertrend that could boost vehicle demand. Transit ridership is way down and fewer people are using rideshare services out of contamination concerns. He suspects those who are carless by choice will reconsider that decision.

“There will be a movement back to privately owned cars versus public transportation,” he predicts.

So far, no Colorado dealers have had to permanently close their doors, Jackson said. Manufacturers and lenders have shown flexibility, and so have employees. Many dealers laid off staff and took out Paycheck Protection Program loans to bring them back. A few bit the bullet and kept everyone on the payroll.

That won him goodwill with his employees and put him in a stronger position to reopen, even though distancing restrictions mean not everyone has come back yet. About a tenth of his 800 or so workers have chosen to remain at home due to health concerns, he said.

Moreland, 72, said Colorado has been good to him since he relocated here four decades ago and that keeping everyone employed was one way to give back to the community.

“You can earn more money, but you can’t easily replace the good employees you got,” he said. “So many people have lost their lives unexpectedly. You better take life and appreciate it.”