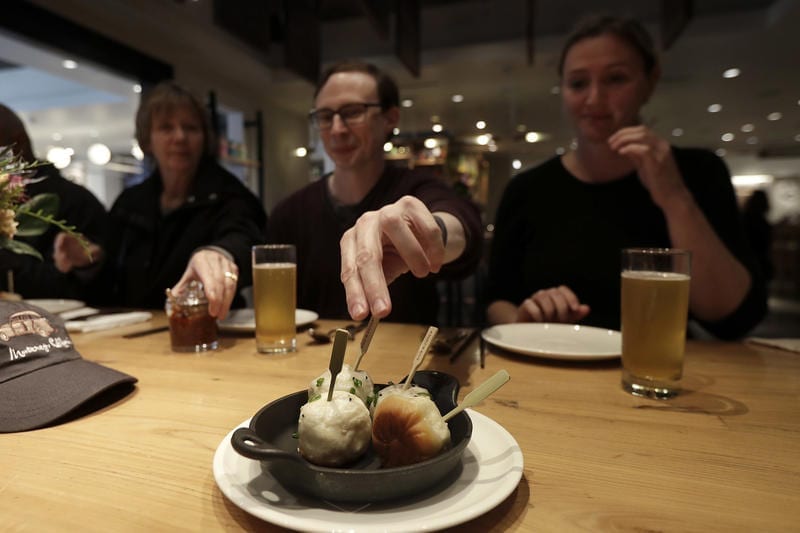 Update: During this hour with food critic Soleil Ho, at 11:30 a.m. ET, we took a call from someone who identified himself as “Dominic” from “Aspen, Colorado.” He unexpectedly made racist comments about African-American restaurant patrons. He also claimed to be “a vice president of a chain of restaurants called Chart House.”

Host Meghna Chakrabarti condemned those remarks and addressed the issue several times in the remainder of the hour.

In order to verify the identity of the caller, On Point spoke with Steve Scheinthal, executive vice president and general counsel for Landry’s, Inc., the Houston, Texas-based company that owns the Chart House restaurant chain.

“There is no Dominic that’s a vice president of Chart House, and no vice president of Chart House called. I don’t even know who this Dominic is,” said Scheinthal. “This is a horrible hoax. Our organization has zero tolerance for any kind of racism. We take this seriously. It was a horrible statement that does not reflect the views of our organization.”

On Point screens its callers to create the most robust hour of live conversation possible. We apologize that this hoax got on the air.

The San Francisco Chronicle’s new restaurant critic Soleil Ho is spicing up reviews with a dash of politics. She joins us.

“‘We are thrilled to welcome Soleil to the team. She was a clear choice: she has a fresh and modern approach to food journalism,’ said Audrey Cooper, editor in chief of The Chronicle.

“Ho is known for her insightful, thought-provoking commentary and deep culinary knowledge. Her influential writing has appeared in national publications such as The New Yorker, GQ and Eater, and she has gained a following with her podcast, Racist Sandwich, that explores the lines between race, class and gender. Ho launched the podcast in May 2016 with co-host Zahir Janmohamed.”

Washington Post: “San Francisco Chronicle hires writer and ‘Racist Sandwich’ podcast host Soleil Ho as its new restaurant critic” — “Soleil Ho, a Vietnamese American food writer and podcaster who has explored such issues as cultural appropriation, bro culture and race, will be the next restaurant critic for the San Francisco Chronicle, the newspaper announced Wednesday.

“Ho will replace Michael Bauer, the Chronicle’s venerable though sometimes controversial critic who retired after 32 years on the job. Ho’s editor expects her to shake up not only the type of restaurants under review but also how they are reviewed.

“Paolo Lucchesi, the Chronicle’s senior editor for lifestyle, which includes food coverage, said the paper’s editors ‘wanted to see how we could push the genre forward,’ which explains, in part, why they selected a writer who covers food through the lens of culture, race and gender instead of someone already employed as a restaurant critic.

“‘We had so many great candidates, and I think she has this unparalleled combination. She’s a great writer, in and of itself,’ Lucchesi said during a phone interview with The Post. ‘She’s a cultural critic already. She’s already changed food journalism in so many ways in America, and I’m excited to see how she will continue to.’ ”

“She’s definitely not bothering with the anonymous thing. ‘I am a millennial and I’ve been on the internet for 15 years and it’s really hard to cover up my tracks at this point,’ she said. ‘It’s out there, my face is out there.’