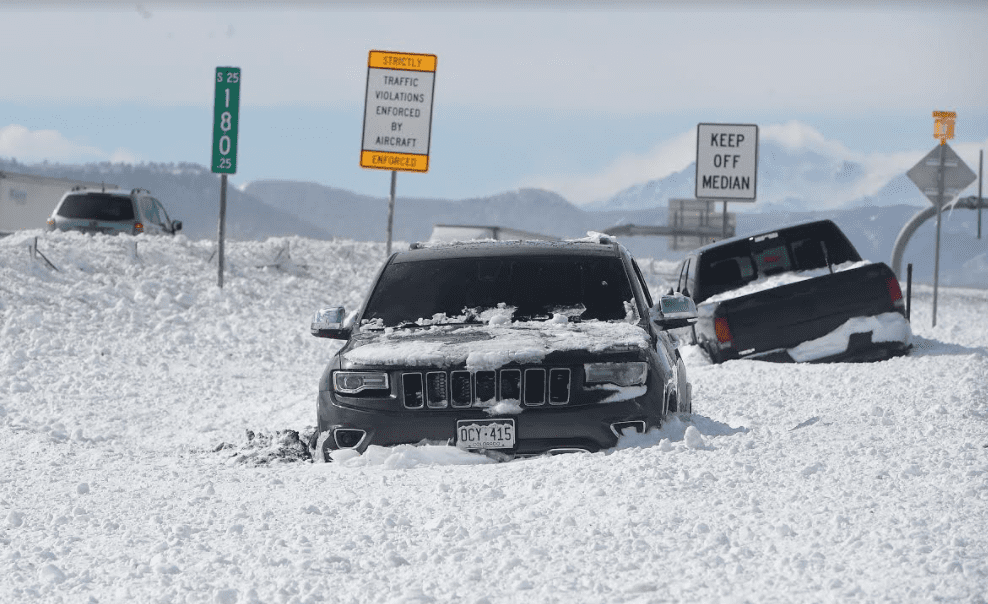 Colorado got hit hard over the weekend by an intense snowstorm that dropped multiple feet of powder during periods of intense snowfall.

Here are some images found around social media that capture that scene:

One user finds an adorable way to measure the amount of snowfall:

📢WARNING: PLEASE AVOID THE I-25 SOUTH GAP📢Cars are backed up and being asked to turn around. If at all possible, please avoid this area. #KnowBeforeYouGo https://t.co/dCyq0qSGJ2 pic.twitter.com/5969Jzpqlh

Motorists stranded by the heavy snow on Sunday along parts of E-470 near Aurora:

I’m over here on Smoky Hill rd. The E470 corridor is a nightmare. Stay away and stay in @AuroraPD is out here helping stranded motorists. Saw a pickup truck and a plow stuck. pic.twitter.com/WEmln29QbQ

All flights in and out of Denver International Airport were grounded until late Monday afternoon.

All runways will remain closed until 2 p.m. today – no flights will arrive or depart before that time while crews continue to treat the airfield for ice and snow. If you’re scheduled to fly into or out of DEN today, check your flight status with your airline pic.twitter.com/I5z4Kt9jii

Denver saw 27.1 inches of snow over the weekend, making it the 4th largest storm on the city’s record.

My favorite part of Colorado snow storms is the sunny sunrise that makes the snow sparkle. ❄️❄️❄️ Officially 27 inches in Denver. Probably more like 19 at our house plus plenty of rain before the snow began. I’m dreaming of the garden that will emerge in a few weeks. pic.twitter.com/2Jcy46lK7k

The snow is came down so hard that even some of the plow truck drivers got struck.

Pix from the TroopsPlows stuck, or on their sides. Stay Put please !@ColoradoDOT pic.twitter.com/bFIuSarrSp

Images from Barr Lake State Park, where Rangers had to walk into the park to get to where their plowing equipment is stored. pic.twitter.com/Mff4TRbkpI

Up to 23 inches of snow was reported in Woodland Park:

Boulder residents woke up to more than two feet of snow on Monday morning.

Colorado’s neighbors to the north in Cheyenne, Wyoming are seeing record-breaking snow:

RECORD: #Cheyenne has had the most snow in a two-day period (on record) with 25.8 inches and counting! #WYwx pic.twitter.com/5WuIqTmoDy

Here are some more snowy scenes from around the state.

A little snow in Colorado pic.twitter.com/7iwVoYwsny

Monster Blizzard in #Denver: 24.1″ so far makes this the 4th largest snowstorm on record! Up in the foothills Aspen Springs is buried under 40.3″.
Video from Golden at 3 PM MT. I measured 23″ at 6:30 PM MT.#blizzard2021@NWSBoulder pic.twitter.com/4rSYpesPIb

#Colorado blizzard is now #Denver’s 4th largest #storm on record. This historic storm knocked out power to tens of thousands of people, stranded others in their vehicles, shut down major roadways… #weather #snow pic.twitter.com/qMgzexYTzE

That was a BIG snow storm. We got about 22” here in #LouisvilleCO. I ended up snow-blowing half the neighborhood, 5 hours straight. #Colorado #ColoradoSnowStorm #Denver7 #COwx #Snow pic.twitter.com/NF7Lg7ULfg

15 inches of snow!! Welcome to March in Colorado!!! pic.twitter.com/assON79Pxv

Despite the chaos, it was a beautiful early morning sunrise with fresh snow.

A beautiful sunrise in the Colorado high plains this morning, with wind driven snow and developing fog on the outskirts of the Front Range blizzard. pic.twitter.com/LIKWjkdhIZ

And here’s one Coloradan “chillin'” in the snow:

Some Colorado dogs are loving the deep snow…

No politics, no nastiness, no bullying or name-calling. Just a couple of happy snow dogs playing in the Colorado Rockies March, 2021 snow storm. pic.twitter.com/33XnntikoG

Whiskey, the #snow dog. Up to about 2 feet in Arvada, #Colorado pic.twitter.com/rqb6OZyTOI

…while other Colorado dogs prefer the cozy fire: