So you need to get to Colorado’s Western Slope? Here are your options. 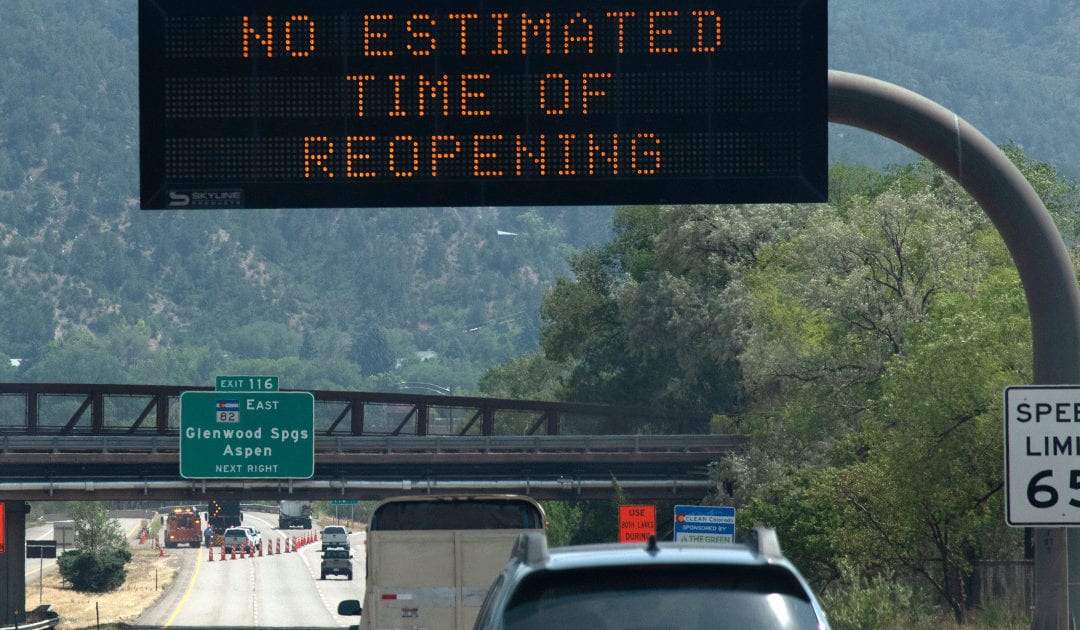 Interstate 70 through Glenwood Canyon will be closed for at least the next several days because of the Grizzly Creek fire.

In addition, Independence Pass through Aspen — which is off-limits to vehicles longer than 35 feet — will have alternating traffic because of high volume.

That means there is really nothing but bad options for people who need to cross Colorado this weekend.

Here’s what some of those bad options are:

Don’t go unless you have to

Before we get into your bad options, you should know that the Colorado Department of Transportation is encouraging people to stay away from western Colorado for the near future.

Even if you are avoiding I-70, alternate routes are expected to be backed up with people looking for a way around the closure. So expect I-70 traffic even if you’re not on I-70 this weekend and possibly beyond.

“Colorado has so many great places to see and visit,” CDOT Executive Director Shoshana Lew said in a written statement. “We want to keep folks off I-70 to the west so we want to encourage residents to check out some of the great attractions to the north and south of our state.”

Your best bet from Denver

Drivers who must criss-cross the state are encouraged by CDOT to use a combination of U.S. 285 and U.S. 50.

If you’re heading west, take U.S. 285 from Denver to Poncha Springs and turn right at the intersection with U.S. 50. You can take U.S. 50 all the way to Grand Junction from there.

If you’re heading east, get on U.S. 50 at Grand Junction and then turn right at U.S. 285 at Poncha Springs.

(A bonus: This route takes you through Gunnison. Check out The Powerstop for a really good burger while you fill up your gas tank. You’ll thank us later.)

You should expect a delay of about two hours if you take this detour.

Motorists can also get around the Glenwood Canyon closure on U.S. 40 through Steamboat Springs to the north, though that will require a stretch on I-70 through either Empire or Silverthorne.

The northern bypass will take even longer. You should also know there is a wildfire burning near Parshall that could slow you down if you try this detour.

If you want to reach Aspen in the next few days, pack your patience.

Independence Pass was closed for several days because of too much traffic and too many way-too-large vehicles trying to traverse it. It reopened on Friday evening, though motorists will have to deal with alternating traffic.

Expect a heavy law enforcement presence as authorities turn away vehicles that are too large for the narrow, windy route. (As we mentioned above, there is a 35-foot-long vehicle restriction.)

“Motorists should expect slow speeds, lengthy travel times and potential delays of up to two hours,” CDOT said in a news release. “Campers and recreational vehicles are strongly advised to seek an alternate southern route.”

For more on what to expect if you brave a trip over Independence Pass, click here.

If the wait to get on and off the pass gets too long, or if it’s closed again, you have options.

Drivers heading from Denver can take U.S. 285 to U.S. 50 in Poncha Springs and then reach Colorado 133 — McClure Pass — either through Crested Butte, Hotchkiss or Delta.

The detour will take about three to four hours longer than the Denver-Aspen trip normally would, depending on how fast you drive.

Don’t be this guy

Some motorists have been trying to skirt the closures by taking U.S. Forest Service roads.

That has ended poorly for a lot of people, and some of the routes are now closed.

Officials are pleading with motorists not to bushwack it. Even if Google Maps says it’s a good idea, trust us, it’s not.

Check out for the latest closure information. It’s a valuable resource any time of the year.