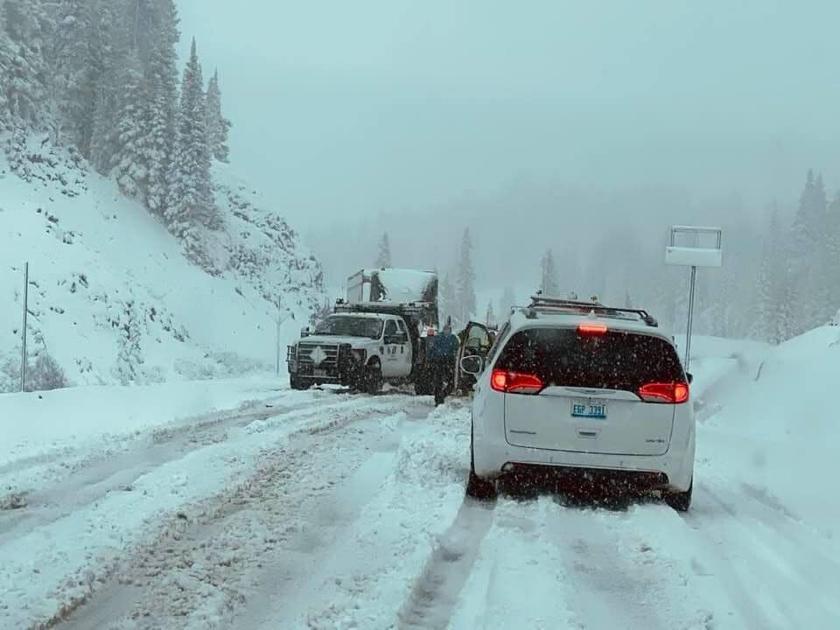 A winter weather advisory has been put in place in the southwest San Juan Mountains through midnight on Friday thanks to wet and heavy snow falling “fast and furious” in the area, according to the National Weather Service.

Around four to eight inches is expected to fall at elevations above 10,000 feet, resulting in slippery road conditions and travel concerns. Winds are also expected to be strong, gusting at around 40 miles per hour.

Scenes from the area this morning showed heavy snow stacking up, causing ruts on roadways. Red Mountain Pass, often called the most dangerous highway in Colorado due to a sheer drop-off that flanks one side of the two-lane road, got several inches of snow, which caused issues earlier in the day.

Based on live traffic camera views, the snow on Red Mountain Pass seems to have cleared up for the most part, for now. At time of publishing, the nearby Coal Bank Pass appears to be more problematic, with snow still clearly visible on the road.

The view at 11:33 on Coal Bank Pass. Photo Credit: Colorado Department of Transportation.

Snowfall in this part of the state can be particularly problematic for travelers due to lack of detours. If Red Mountain Pass, located between Ouray and Silverton, were to be shut down, it adds hours of travel for those driving between these towns.

Even though the snow might mean a hassle, the southwest corner of Colorado is currently experiencing a major drought with dwindling snowpack from the winter unlikely to offer much relief. Snowpack in the area currently ranges from 31 percent to 49 percent of the to-date median in the three basins of this region.

If traveling around this part of Colorado, proceed with caution as wintery weather is expected to continue for the rest of the day. Follow along with the Office of Emergency Management, San Juan County Colorado or the National Weather Service for more updates.

Elsewhere in the state, baseball-size hail and 70 mile per hour winds could hit, particularly in the area of eastern Colorado.