Smoke waves expected to intensify, continue to threaten public health across Colorado and the West 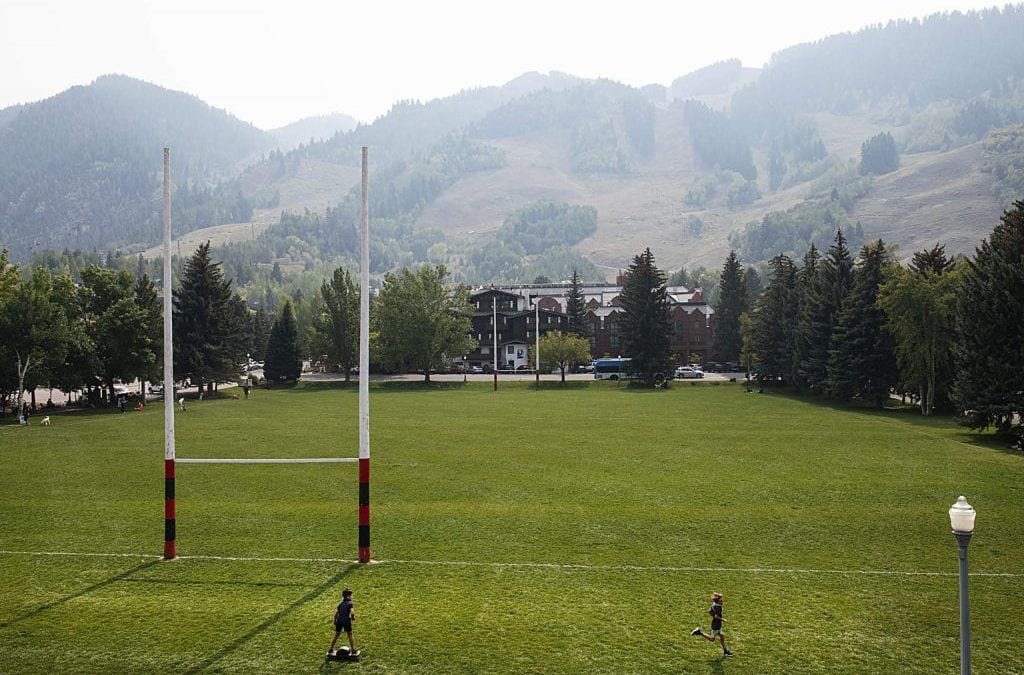 Wildfire-produced smoke waves that harmed air quality in the Roaring Fork Valley this summer may be associated with health risks for months after the fires end, while additional research shows that long stretches of smoky days are likely to become more frequent and more intense across the West as the climate warms.

In mid-August, thick smoke pooled in the valley from the Grizzly Creek and Pine Gulch fires, and earlier this month, smoke moved in from large wildfires in Utah and California. Between the two smoke events, there were 14 days during which the 24-hour average air pollution level was elevated beyond “satisfactory” in Aspen and Snowmass Village — or above 50 on the Environmental Protection Agency’s air quality index  — and there were seven days during which the local air quality was above 100 on the AQI, which is considered unhealthy for sensitive groups. On three of those days, the AQI scale broke 150, which, according to the EPA, means the general public may experience health effects.

Unhealthy air again settled into the Roaring Fork Valley on Thursday and Friday, with Aspen’s AQI peaking above 150 on Thursday afternoon, resulting “from a combination of the Middle Fork wildfire located approximately 10 miles north of Steamboat Springs, and out-of-state wildfires,” according to a state of Colorado air quality advisory.

A 2016 study predicts that smoke waves such as these will intensify as climate change continues. Researchers from Yale, Harvard, the University of Michigan and Colorado State University used fire-prediction models alongside climate models and found that much of the Western U.S. can expect to see thicker smoke more often, especially in the Northwest and the northern Rocky Mountains. The model shows that smoke waves are likely to last longer and be more intense in much of Colorado; residents of Pitkin County could see a total of between 10 and 20 more days of smoke over a six-year period by 2046-51, compared with 2004-09. The hardest hit areas, in Idaho and Montana, could see as many as 45 additional days of smoke.

This study mirrors findings indicating that wildfires have become increasingly larger and more frequent over the past 40 years. Persistent drought, early snowmelt and rising temperatures that are the result of climate change also contribute to longer, more-threatening wildfire seasons. Large fires are burning much longer than in the past, from an average of about 20 days in the 1980s to more than 50 days from 2003 through 2012, according to a 2016 study out of the Sierra Nevada Research Institute at the University of California.

Pollution from wildfire smoke includes tiny particulate matter, called PM 2.5 because the particles are 2.5 microns or less in width. These pollutants slip through the body’s defenses — such as nose hair — and can lodge in the lungs, where they can cause inflammation and oxidative stress, which can make it harder to repair damage.

Khilnani estimated that calls and visits to his office typically increase by about 20% during periods of poor air quality from wildfires, but smoke events so far in 2020 have not had as significant an impact as in other years.

“Patients are more in tune with wearing a mask this year than ever before,” Khilnani said, noting that an N-95 mask is needed to protect people from the tiny particulate matter in wildfire smoke. Because people are not going out as much during the COVID-19 pandemic, many are avoiding exposure to poor air quality while commuting, dining out and socializing.

Beyond the immediate impacts seen during smoke-wave events, recent research from the University of Montana indicates that the effects of wildfire smoke can be felt months later.

Erin Landguth, an associate professor at the University of Montana’s Center for Population Health Research, analyzed 10 years of data on influenza in Montana, alongside wildfire-season PM 2.5 levels. After Montana’s worst wildfire seasons — 2012, 2015 and 2017 — there were three to five times more cases of influenza than in a typical year.

“We showed that wildfire season’s PM 2.5 level is associated with influenza incidence months later. Cases of influenza go up after bad fire seasons,” Landguth said. “We did not expect to see this long of a time lag.”

While there isn’t yet research on how wildfire smoke affects susceptibility to COVID-19, Khilnai said it is clear that patients with damage to their lungs are more prone to infection and suffer more severe symptoms.

“It makes perfect sense that it’s much easier to get COVID-19” after exposure to wildfire smoke, Khilnani said.

The Centers for Disease Control and Prevention has issued a warning that “wildfire smoke can irritate your lungs, cause inflammation, affect your immune system and make you more prone to lung infections, including SARS-CoV-2, the virus that causes COVID-19.”

Jannette Whitcomb, an environmental health specialist who focuses on air quality for the city of Aspen, said that given the increased exposure to wildfire smoke and the pandemic, it’s especially important this year that the community take all precautions to ensure public health.

“We now have this other reason to impress upon people to get that (flu) vaccine,” she said. Even if wildfires close to home are under control, heavy smoke can blow into the Aspen area from wildfires across the West.

“You can’t put up a barrier (for smoke),” Whitcomb said. “We are in this together, globally, but especially regionally.”

When wildfire smoke causes poor air quality, officials warn residents to stay inside with the windows closed. But smoke often coincides with heat, leaving those without air conditioning particularly vulnerable.

One solution is to create public clean-air shelters, where people can gather in buildings that have advanced air conditioning and filtration systems. In anticipation of this wildfire season, Whitcomb said she had considered using the Aspen Recreation Center as such a shelter, but “now with COVID, everything is about staying home.”

This year, summer temperatures have been above average in the Rocky Mountains, and much of western Colorado moved from “severe” into “extreme” drought in August. The National Interagency Fire Center predicts an above-average fire potential in Colorado through this month, with a persistent warming and drying trend.

As wildfires, smoke and heat continue to threaten people’s health in the Western U.S., Whitcomb says it’s important that the city of Aspen continue to eliminate air pollution from other sources, including emissions from vehicles and larger particulate matter kicked up by traffic on dirty roads.

“This is the foreseeable future with climate change,” Whitcomb said. “We have to keep our airshed as clean as possible to keep us strong and healthy for when we have these smoke events that are out of our control. We need to keep it as clean as possible for as long possible so we have a respite when the smoke finally goes away.”

Aspen Journalism collaborates with The Aspen Times and other Swift Communications newspapers on coverage of the environment. For more, visit www.aspenjournalsim.org.