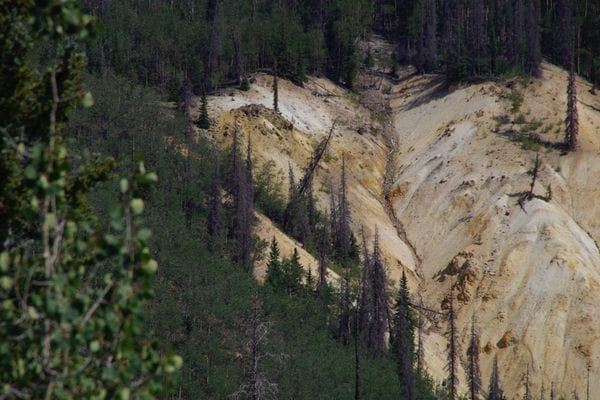 Designated as a National Natural Landmark in 1983, this relatively young and still active slide is one of the best examples of a rare geologic phenomenon known as “mass wasting” in the world.

Centuries ago, a portion of the Lake City caldera broke off of Mesa Seco and started moving down the steep slopes of the Lake Branch of the Gunnison River. Unlike many other slides, this was a slow-moving mass of materials known as mass flow or earth flow. The flow is about four miles long. Around 700 years ago, the flow dammed the Gunnison River’s Lake Fork to form Lake San Christobal. Soon after the damming of the river, the flow stopped.

Around three centuries ago, another slide from the same headwall started moving downhill. It has undergone active movement ever since at a rate of about 20 feet per year. Active areas of the flow can be seen in the assortment of tilted trees. The more trees that are tilted, the more active the flow.

The name Sumgullion comes from two sources. It’s often used by miners when describing the clay and mud left in the sluice when separating gold from ore. It’s also the name of stew.

Because of its uniqueness, the mass flow has been thoroughly studied throughout the years. The flow is faster in the summer when water is available and slower during the winter. The flow rate is related to tidal forces from the moon as well as air pressure. Pressure decreases at night, slowing the flow, and increases during the day, increasing the flow. Even climate change has had an impact on the geological wonder. Higher temperatures have slowed the flow and may even cause the newer flow to stop in the future.

Cannibal Mesa and Deadman Gulch, both named after the Packer Massacre, sit on the edge of the mass flow. The slide itself was first identified by Alferd Packer when he described the massacre site as, “being on the side of a large landslide.”