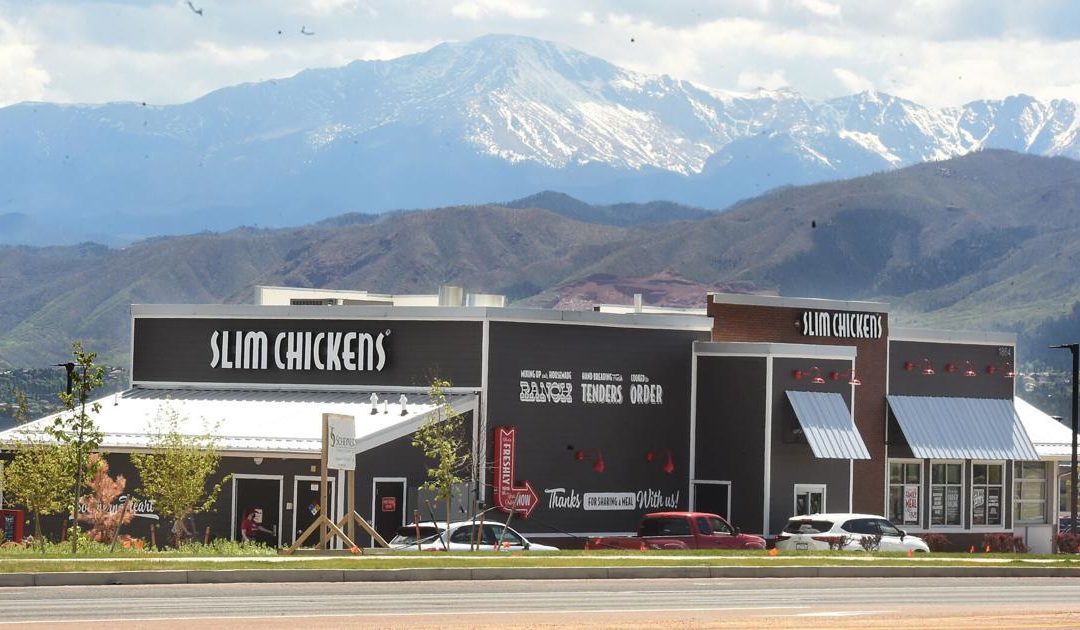 Slim Chickens is the latest chicken chain to spread its wings in the Pikes Peak region.

The Arkansas-based, fast-casual chain’s second area location is planned for the 36-acre Falcon Marketplace shopping center, which is under construction northwest of Woodmen and Meridian roads in Falcon, an unincorporated El Paso County area northeast of Colorado Springs.

Slim Chickens opened its first Springs-area restaurant in March in the Victory Ridge development on the Springs’ far north side; it also has locations in Aurora and Centennial.

Franchisee Byron Wheeler said his L.O.V.E. Restaurant Group of Castle Rock has contracted to buy a site at Falcon Marketplace and hopes to complete the purchase within two months. Construction of Slim Chickens could begin in September and he’s targeting an opening in February or March.

The restaurant will be similar to the Victory Ridge location — 3,400 square feet, with indoor and outdoor seating and a drive-thru, Wheeler said. The location will employ 90 people.

Fast-growing Falcon, once a rural community of large ranches, was attractive for Slim Chickens, Wheeler said.

Thousands of residents have moved to the area over the last 30-plus years, in part, to escape city traffic and for less expensive housing. Falcon now is home to suburban-like developments such as Woodmen Hills and Meridian Ranch, which have been followed by Walmart, Safeway and dozens of fast-food and sit-down restaurants, stores and service-oriented businesses.

“We love Falcon,” Wheeler said. “I’ve actually been looking at that site for three years now. We were finally able to put a deal together on it. We think that Falcon is a fast-growing area. We think that it’s a great customer base for our product.”

Over the last 18 months, a Slim Chickens food truck has operated at several locations in Falcon and nearby Peyton, and the reception has been very strong, he said.

“It was the food truck’s performance in places like the Meridian (Ranch) rec center and JAKs brewery that made us really start taking a hard look at the commercial real estate there,” Wheeler said.

“We just think that Falcon is a great location for this brand and a great strategic placement for our continued development in the Colorado Springs market.”

That development includes two more Slim Chickens in the Springs that Wheeler expects to announce in the next 45 days.

The chain is one of several new chicken brands opening in the area. Raising Cane’s Chicken Fingers of Louisiana has opened three locations since arriving in 2019; Birdcall, a Denver import, opened in March; and California-based El Pollo Loco has announced an expansion to Colorado Springs in the next few years.

They join familiar names such as KFC and Popeye’s that have long operated in the Springs. Another favorite, Atlanta-based Chick-fil-A, has eight area locations and plans to build a ninth in the Citadel Crossing shopping center.

Falcon Marketplace will be anchored by King Soopers, which plans to build a 123,000-square-foot store that’s targeted to open in 2022. The presence of King Soopers also was a draw for Slim Chickens, Wheeler said.

The King Soopers will be one of the grocery chain’s marketplace stores, which are roughly twice the size of its typical locations. In addition to full lines of groceries, marketplace stores sell clothing, household goods, dinnerware and small appliances, among other merchandise.

Other retailers and restaurants are eying Falcon Marketplace, which is being developed by Evergreen Devco, a real estate company with offices in Denver, Phoenix, Los Angeles and Salt Lake City.

Panda Express, Super Star Car Wash and Discount Tire have signed contracts to purchase parcels at Falcon Marketplace, Evergreen Devco leasing director Heather Wiseman said via email. The company has a “high degree of confidence” those users will follow through on their land purchases, barring any snags as their proposals go through El Paso County’s approval process, she said.

“We are also in talks with a fast-casual burger restaurant, a regional coffee chain, and there are plans to construct a small multi-tenant building with some service-oriented tenants who will be announced soon,” Wiseman said.

The company has just a handful of sites left at the shopping center, including space for a so-called junior anchor to the west of King Soopers.

As that process plays out, the company will continue permitted work on the development of sites for shopping center users; she’s hopeful the first businesses will open in late 2022, though some — such as Slim Chickens — could open sooner.

Evergreen Devco purchased Falcon Marketplace last year from a Texas group, which at one point had halted stormwater and drainage upgrades and other site preparation work at the shopping center because of what it said were financial troubles caused by the COVID-19 pandemic.

Evergreen Devco’s purchase of Falcon Marketplace didn’t include the 11-acre King Soopers site, which a grocery chain affiliate had bought on its own.