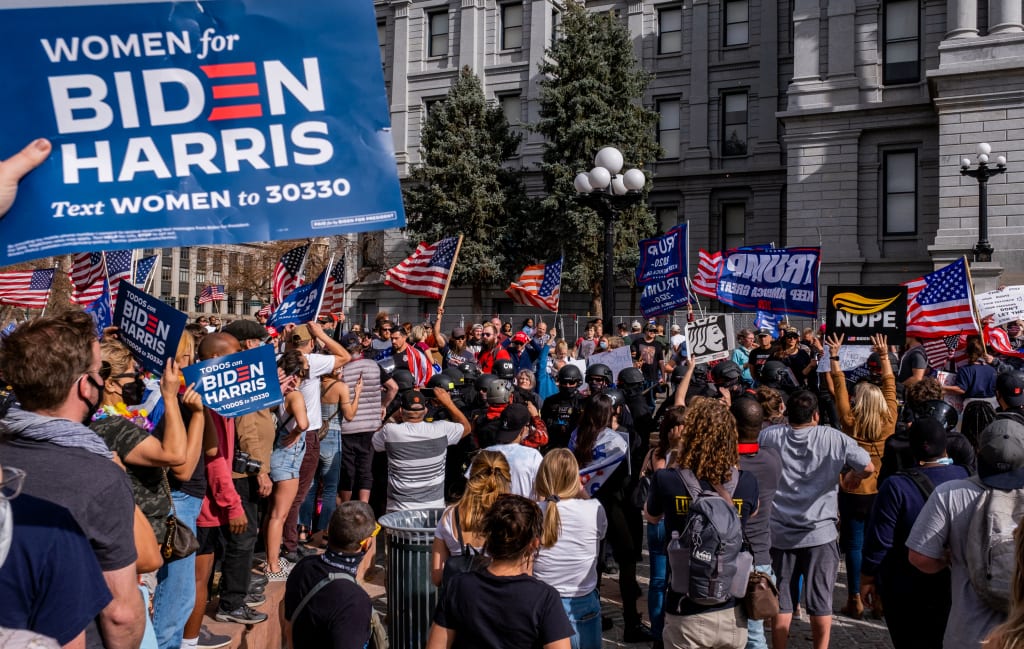 While President Donald Trump’s shrinking circle of sore losers is enabling his delusions that frivolous lawsuits can change the outcome of the election, all but the most conspiracy-benighted Americans are ready to move on with our lives. The latest polling shows 79% of Americans accept that Joe Biden won the election, even if you add in a healthy polling error.

And they should because President-elect Joe Biden got nearly six million more votes than Trump nationwide. Biden’s margins in the tipping-point states of Wisconsin, Pennsylvania, Georgia, Arizona, Michigan and Nevada are insurmountable. This thing is over, but the president’s sycophants continue to insinuate that America’s nonpartisan, decentralized system of tallying votes was somehow manipulated against the president by Democratic, unaffiliated and even Republican local election officials — even Fox News itself!

Recanted claims by a postal worker, something about Sharpie markers, nonexistent “secret watermarks” on ballots, and too many other bogus conspiracy theories to list in full somehow combined to tip over 270,000 votes in six different states against the president to flip the election for Joe Biden.

It’s nonsense, but Secretary of State Mike Pompeo, Senate Majority Leader Mitch McConnell, Senator Ted Cruz and other GOP luminaries are giving frightening credence to these preposterous stories. Colorado’s very own Senate-seat loser, Cory Gardner, who once claimed in advertisements that “when my party is wrong, I’ll say it,” is, of course, dead silent. The outcome of the election is not in doubt, but the confusing, archaic, slow, and sometimes deliberately dysfunctional processes of tallying votes in many states is creating a vacuum Trump and his cultists are flooding with disinformation, distrust, and democracy-destroying distortions of reality.

In Colorado, though, things were different. At 7:01 p.m. on Election Day our state was called for Biden and U.S. Senator-elect John Hickenlooper. Most of the statewide ballot initiatives were declared quickly, and most competitive legislative races were called right away as well. Our nationally-renowned and bipartisanly-lauded system of all-options voting with universal mail ballots delivered a doubtless result once again, and our Democratic, unaffiliated, and Republican county clerks and recorders, as well as our secretary of state, Jena Griswold, should be applauded for another competent administration of an incredibly high-stakes election.

Colorado Democrats will continue to dominate state government, as I predicted, possessing the most power Democrats have held in our state since FDR was president. They picked up a seat in the state Senate and held a massive 41-24 seat majority against a demoralized state House Republican minority who only after another punishing defeat grasped their previous leadership was leading them into the abyss. But even now, there are those in this historically tiny House GOP minority who think the reason that they failed again in this election despite GOP gains in other states was that they were not conservative enough. This progressive prays that sentiment permanently permeates the rest of the caucus.

After Cory Gardner’s humiliating 9 point loss, the face of the Colorado GOP is now extremist congresswoman-elect Lauren Boebert — the gun-toting, patron-poisoning darling of the right-wing media who immediately backed up Trump’s lies about voter fraud. State Republican Party Chairman Rep. Ken Buck’s nonsensical request to the Department of Justice and the Federal Elections Commission investigate Colorado’s election seems to have disintegrated, and coming off yet another catastrophic shellacking for the Colorado GOP, his chairmanship should follow.

As predicted, the right-wing in Colorado wants to cling to the notion that we are not yet a blue state because along with electing Democrats at every level the voters approved a relatively small income tax cut, and in Proposition 117 made one of the worst aspects of TABOR even worse. They tell you to ignore the passage of a tobacco and nicotine tax increase as well as one of the best and most generous systems of paid family and medical leave in the country, which gained majority support in both conservative strongholds of Weld and El Paso Counties. They’ll skip over the 20-point thrashing of a misguided abortion ban that was allegedly polling neck-and-neck the entire campaign, the affirmation by voters of Colorado’s support for the National Popular Vote Compact, and the 13-point rejection the voters of Colorado visited upon the president of the United States.

At this point, the only people who claim Colorado is not a blue state have some incredibly harshly tinted rose-colored glasses.