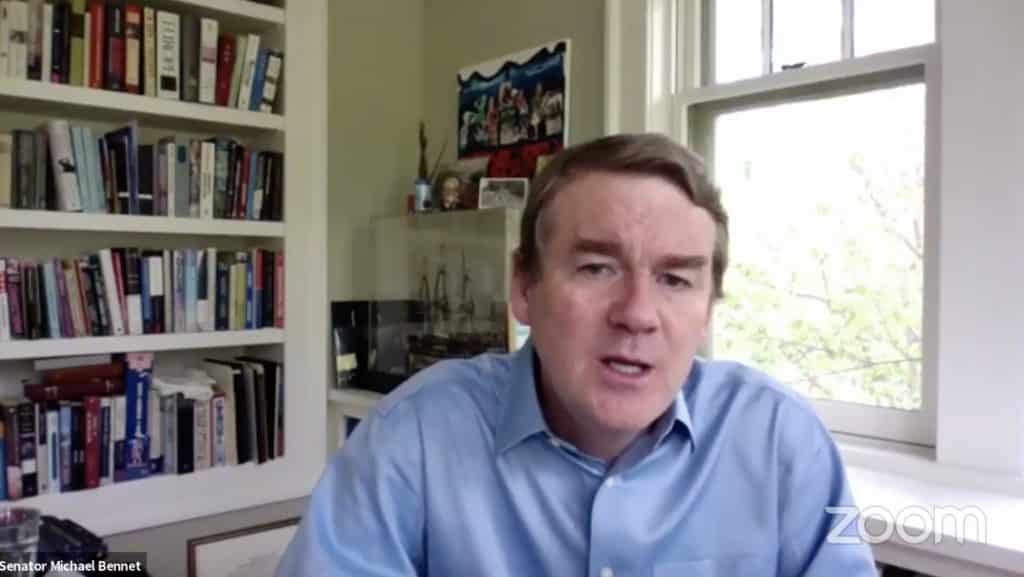 Sen. Michael Bennet, D-Colorado, joined editors of several Swift Communications newspapers for a live Q&A video webinar Friday afternoon. The senator answered questions from Swift journalists and the public about the federal government’s efforts to stem the coronavirus pandemic and what’s being done to help rural and resort mountain communities get through the crisis.

Bennet recognized there have been issues deploying federal pandemic recovery programs, such as the Paycheck Protection Program and stimulus distribution.

“It is important to realize that this is the most catastrophic economic downturn we’ve ever had, with a health crisis turning into an economic crisis,” Bennet said. “When you’re implementing legislation and bills from Washington of this size, things are going to be broken and will need to be fixed.”

Bennet said he has been learning about what issues to prioritize for constituents through his conversations at virtual town halls and Zoom meetings with officials across Colorado.

The primary need at the moment, he said, was funding for state and local governments.

“We have $3 trillion of stimulus, but only $150 billion is for state and local governments,” Bennet said. “We have to do much more there.”

Bennet also said he is working with Sen. Todd Young, R-Indiana, on a fix for the Paycheck Protection Program, which provides small businesses with forgivable loans to incentivize retaining their employees during the shutdown. Bennet said he has been working to extend the program from eight to 16 weeks.

Aside from the messy and unequal distribution from the program, Bennet said it did not work well for many businesses in Colorado, such as resorts and restaurants, which have been forced to close to the public because of the pandemic and have no work for which to pay employees.

“They don’t need the money yet; they need the money later,” Bennet said. “This idea that they’re going to hire back all their employees right now while under stay-at-home orders and orders to stay closed, it didn’t make a lot of sense to me.”

The fix Bennet and Young are proposing is called the RESTART program, which would provide businesses that have taken a substantial revenue hit with flexible funding for six months of payroll, benefits and fixed-operating expenses. A share of the loan would be forgiven based on revenue losses reported in 2020, with the remainder to be paid over seven years.

Bennet said there was also a great need for shoring up Colorado’s medical infrastructure, as restarting the economy relied on resolving the public health crisis. He pointed out that rural hospitals in Colorado were only 40% funded before the pandemic hit and are now under siege with few resources available.

“If we are going to manage the pandemic and keep the economy open, we need the infrastructure in place to do the testing, contact tracing and, ultimately, vaccines,” Bennet said.

Bennet proposed melding a solution to the health crisis with the economic crisis by creating a national “Health Force,” which would see hundreds of thousands of Americans trained and placed in paid jobs helping with testing, contact tracing and other public health needs. The plan also would put money into beleaguered local economies, he said.

“It would help us get people a decent job when we have record unemployment as well as create the infrastructure to reopen the economy and keep it open,” Bennet said.

To help rural hospitals, Bennet said he also has been working with other senators on an extension and expansion of the federal Rural Community Hospital Demonstration program, which provides innovation funding for five rural hospitals in Colorado, including St. Anthony Summit Medical Center in Frisco.

“Hospitals are the bedrock of any rural community, particularly in the Western states, where the distances are so vast, and you need hospitals close by as a practical matter,” Bennet said.

Bennet, a former superintendent for Denver Public Schools, also addressed education, which faces a big funding hit because of the pandemic’s impact on local property tax revenue. Bennet said Colorado’s K-12 funding was dismal before the pandemic and that those funding issues will be compounded now.

Another area Bennet wants to see improved is internet access for students, with some districts seeing half their students lacking internet at home. Bennet, along with several other senators, has pushed for legislation to free up funding from the $4 billion federal E-Rate program to pay for Wi-Fi hotspots and better broadband infrastructure for students across the nation as schooling turns to video conferencing from home.

Finally, Bennet addressed the issue of how to pay for all of these programs. Bennet took a jab at President Donald Trump, saying Trump did not seem to care all that much about deficit spending and the national debt when he passed tax cuts predominantly benefiting wealthy individuals instead of small-town America.

Bennet said those tax cuts and general failure to properly prepare for a pandemic has left the federal government hobbled in its efforts to fight COVID-19.

“We borrowed $5 trillion from China to give tax cuts to the richest people in America,” Bennet said. “Combine that with the $5.6 trillion spent on two wars that lasted 20 years in the Middle East and an unsustainable health system that spends twice as much on health care per person as any other country. Add that up, and does that make us prepared well for the pandemic? Not at all.”

Bennet said that instead of those tax cuts, the federal money should be spent now, during a national emergency when money is not flowing through America’s economic veins.

“An economic downturn, an economic collapse, is exactly the moment when we should be spending money,” Bennet said.