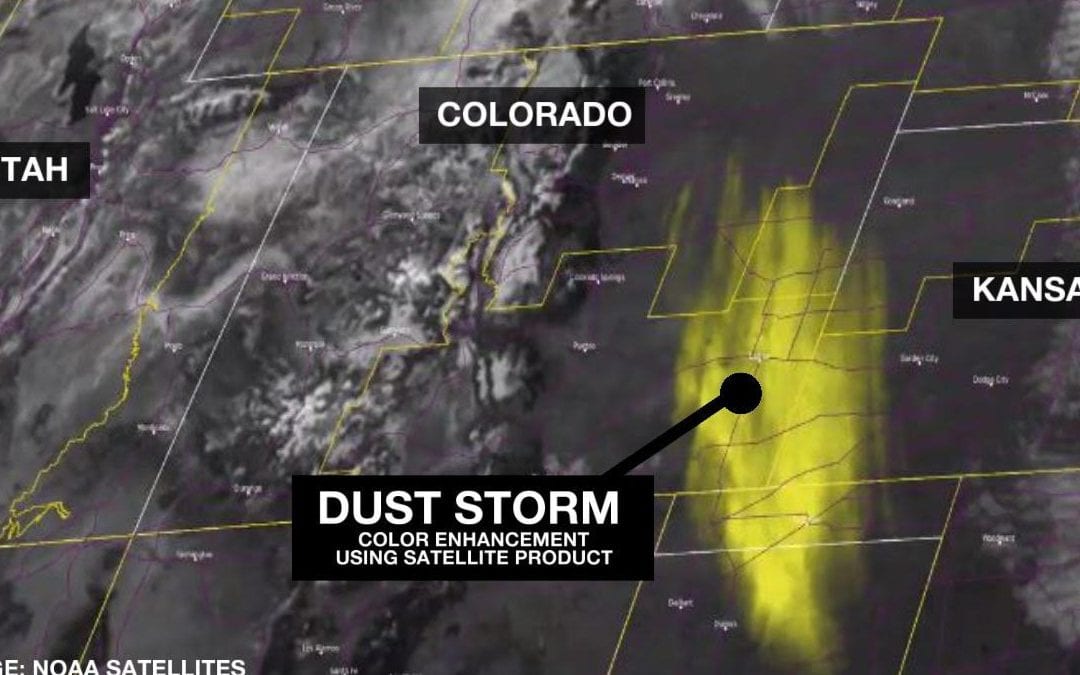 Windy weather in the western United States, particularly across Wyoming and Colorado, kicked up a big dust storm in the past week. The dust plume was so large at its peak it was easily spotted by satellites orbiting the Earth showing the scale of the dust plume. At the height of the storm, winds at the surface were gusting faster than 60 mph leading to extremely low visibility in eastern Colorado and forcing officials to close several roads.

NOAA satellites are able to look at Earth from space in a number of ways. The most commonly used way on television would be visible satellite images like what’s seen above. In this capture from space, you can differentiate the dust plume from cloud cover based on its appearance and true color.

Several other topographic features like the snow-capped Rocky Mountains are visible in the left-hand side of the image.

Satellites have the ability to show much more than just what is visible to the eye. Using algorithms, a satellite can decipher and make clearer what it is seeing from space by using color tables to illustrate and differentiate what’s in the frame. In the case of the Colorado dust storm, NOAA satellites use something called the DEBRA satellite product identifying what is dust, and making it a bold yellow to contrast it with any nearby clouds or weather features. DEBRA stands for Dynamic Enhancement Background Reduction Algorithm, you can read more about it here.

Thanks to this development, it makes it much easier to identify where dust storms are, how big they are and how and where they form.

The tight pressure gradient over the western US sparking the windy weather causing this large dust storm continues today.

The National Weather Service has another swath of high wind warnings in place until Thursday morning in southern Wyoming and northern Colorado, with expected wind gusts topping 60 mph today and some isolated wind-prone areas seeing gusts closer to a whopping 80 mph