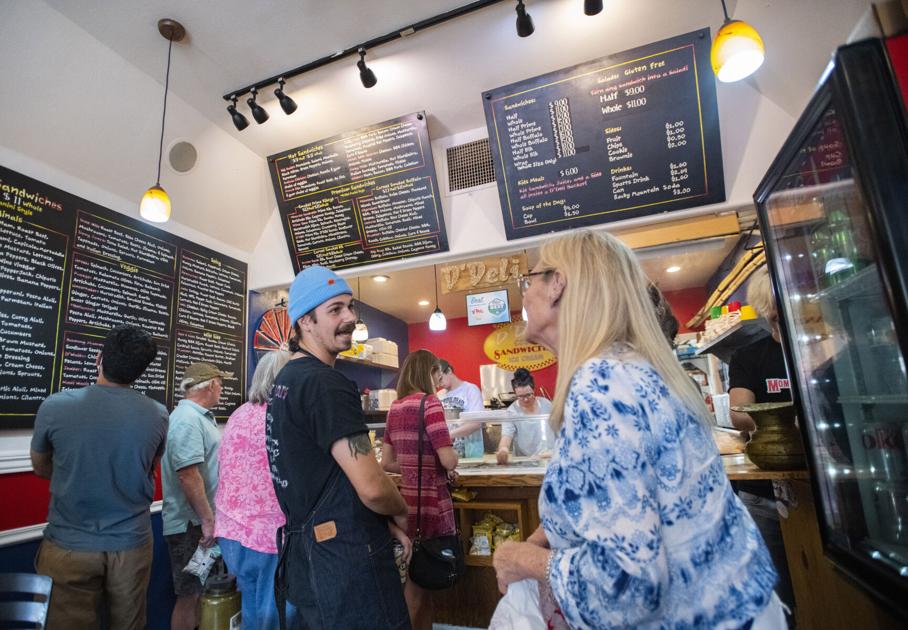 Welcome to D’Deli, where the line is out the door for sandwiches beyond your wildest dreams. (Video by Katie Klann)

GOLDEN • It was a sandwich shop when Al Neighbors bought the nook along the historic main street. It was called D’Deli, a play on the Dutch owners’ pronunciation.

“It was super basic,” Neighbors recalls of the D’Deli he entered in 2004.

The name remains. The logo remains.

“I just changed the sandwiches around,” Neighbors says.

D’Deli is anything but basic today, a local attraction in its own right, without calling attention to itself quite like Coors Brewery, Buffalo Bill’s grave and the flat top mountains framing this town west of Denver. Though, similar to Coors, lines of people regularly stretch down the block.

Neighbors and his fellow sandwich masterminds are sympathetic to your feeling overwhelmed. Spin the wheel, they might suggest. Have your sandwich chosen for you. It’s all good, they promise.

They ask you to not get angry, please. It happens. Jimmy John’s is down the street, thank you.

“It always depends on the customer,” says manager Tyler Smith, “and how open they are to change.”

When he bought D’Deli in 2004, Neighbors was ready for a change. The Colorado native started by checking IDs at a bar, then went on to fine dining establishments and sports pubs and everything in between.

“I’ve had my fair share of nonsense in the restaurant business,” Neighbors says.

D’Deli has been the most nonsensical of all.

He wasn’t trying to be special or unique, Neighbors swears.

For instance, he was around a good salad at a Boulder venue, the Gold Hill Inn. How might this be a sandwich? he asked himself. The answer is the Gold Hill, featuring roast beef, bleu cheese aioli, onions, mushrooms, tomatoes, spinach, beets and jicama, the potato-like root.

As Raiders fans are prone to do — yes, this Colorado native is a Raiders fan — Neighbors got a little crazy with the JWB. That’s initials for “just win baby,” the team motto. The HFS on the sandwich stands for “hot (expletive) sauce,” slathered between three meats, cheese and peppers.

Neighbors has always invited employees to share in the madness. Many are young geniuses studying at Colorado School of Mines. Here they’ve delighted in such creations as the Knuckle Sandwich, a house favorite packing prime rib, bacon, artichoke dip, cayenne honey and jalapenos. That’s one grilled like a panini, with the bread turned inside-out … just because.

That tactic is no secret, nor is the “deli style” of giardiniera and fried onions — good for any sandwich, workers say. Seriously. Why not? says the one who goes by G-Man, his shaggy hair and Grateful Dead shirt a fair representation of free spirits behind the counter.

That’s what Neighbors wants from his staff: friendly and independent, open-minded.

“I remember when I interviewed here,” Smith says. “The first question he asked was, What’s the greatest rock ‘n’ roll band of all time?”

Neighbors knows the answer to be something like Led Zeppelin, The Who, Van Halen and AC/DC.

But he’s open to all responses.

D’Deli separates itself further with locally sourced, corned buffalo and elk, grilled between bread from a local bakery.

The Dalton is popular among originals ($9, $11). It’s named for a worker who seemingly couldn’t get enough of the panini, a melty melody of pepperoni, mozzarella, Parmesan, pesto aioli, garlic, tomatoes, basil and Italian seasoning. Vegetarians’ go-to is another panini, Bellanini, with much of those same ingredients plus artichoke, feta and olive tapenade.

Other originals are tame takes on the club and Italian. There are also takes on curry and bahn mi.

And then there’s the “wild side” of the menu ($9, $11). The Camper takes the trinity ingredients of s’mores and throws in bacon and bananas. Smith says you won’t want any other PB&J after the Jackwagon, which adds bacon, honey Sriracha, sunflower seeds, fried onions, pineapple. jalapenos and banana peppers.