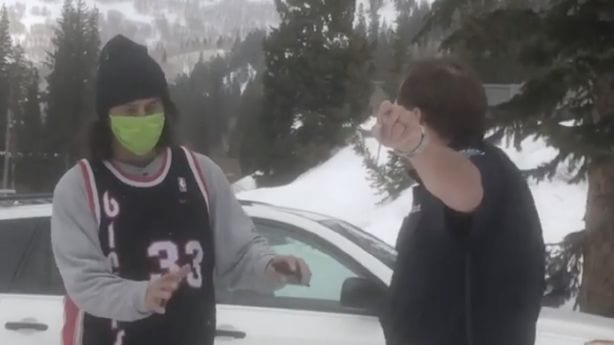 SALT LAKE CITY — The Salt Lake County Sheriff’s Office is investigating a heated exchange between a Unified police officer and a man that allegedly took place at Brighton over the weekend.

A 44-second video of the interaction, which includes some vulgar language, was posted late Sunday evening by Instagram user @flaskaryan.

In the video, a police officer is seen yelling at another man, asking him “how far do you think I’m going to tolerate your attitude?”

The police officer also says “trespassing is trespassing” to the man, and later says he is doing the man the benefit of “trying to get permission from somebody.”

The man asks the police officer to stand six feet away from him to observe social distancing measures, to which the officer replies “I do not need to give you a social distance.”

The officer also tells the man he “invited this” on himself, before telling the man to “shut your (expletive) mouth.”

A female officer is also seen in the video asking the person filming to stop. The cameraman replies that it’s his right to film, and the officer says, “OK.”

In a statement to KSL, Salt Lake County Sheriff Rosie Rivera said: “We are aware of the video and are investigating the incident. We do not condone this type of language from our officers.”

It’s not clear what the man was doing at the resort when the video was taken.

Ryan Flaska, the man who posted the video to Instagram, said there were no arrests, and no tickets or citations were issued. The group was never officially asked to leave the area.

“There is a lot that can be debated in this video, what led up to these actions or what was said before the video started,” Flaska said in an Instagram message. “The officer’s actions clearly put this person at risk.”

He said the group was concerned that the officer did not comply with social distancing recommendations in the midst of the pandemic. They were being respectful to the officer, he added.

No one called to complain about the group, and there were not any “no trespassing” signs posted in the area, according to Flaska.

Resort operations are currently suspended at Brighton Resort due to the COVID-19 pandemic. Uphill travel is also prohibited because neither Brighton Resort nor the U.S. Forest Service is able to provide services necessary to allow uphill travel due to pandemic-related closures, according to the resort’s website.

No further information about the interaction was immediately available Monday.