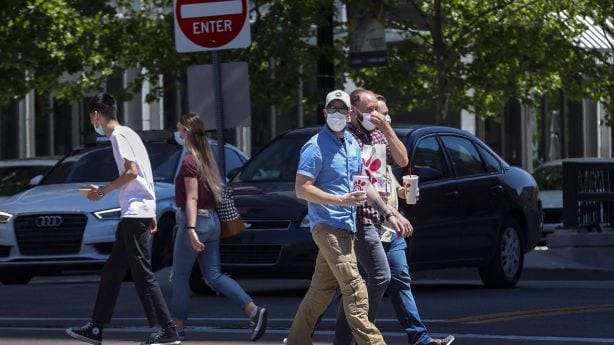 SALT LAKE CITY — Salt Lake County on Thursday extended its mask health order to last through August. On the same day, the Salt Lake Chamber and 130 businesses called on state leaders to make face masks mandatory throughout the state.

The chamber’s statement, which was signed by Zions Bank, the University of Utah, Salt Lake County, Larry H. Miller Group and 134 others, noted the rising COVID-19 cases in Utah is concerning and called on leaders to require face coverings in all public places across the Beehive State.

Salt Lake County, one of two counties in the state to implement a mandatory mask health order, now says its original order will be in effect through Aug. 20.

The order, which went into effect on June 27, requires residents to wear a covering over their nose and mouth in public anytime social distancing is not realistic or possible.

Summit County is the only other area in the state where face coverings are mandatory — Gov. Gary Herbert approved both counties’ requests last week.

The majority of COVID-19 cases in the state are centered in Salt Lake County at 50.1%, according to data from the Centers for Disease Control and Prevention.

Summit County was an early hotspot in the pandemic and became the first in the state to issue a stay-at-home order in March, followed shortly by a stay home directive issued by the state.

Studies have found wearing face coverings significantly reduces viral transmission and experts have continually asked the public to wear them.

Herbert has asked Utahns repeatedly to do their part and wear face coverings — he told Utahns in June to “do better” about wearing masks in public.

“We hope that all Utahns understand the importance of wearing a mask, and will be diligent in their efforts to wear one,” Herbert wrote in a statement issued on June 12.

As of Thursday, Utah had 23,270 total confirmed COVID-19 cases, with 1,505 total hospitalizations and 176 total deaths from the disease.

State epidemiologist Dr. Angela Dunn warned officials in a June memo the state was reaching a critical point after a surge in cases. She warned another shutdown might be necessary to slow the spread of the virus.

In response to the memo, Herbert said he had “no plans to shut down Utah’s economy.”