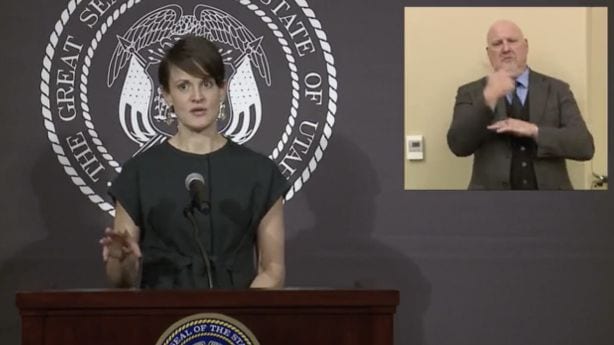 SALT LAKE CITY — Utah’s number of COVID-19 cases has increased by 62 from yesterday, with no new reported deaths, according to the Utah Department of Health.

Thursday’s totals give Utah 1,074 confirmed cases, with 100 hospitalizations and seven total deaths from the disease. Previously, there were 1,012 cases in the state.

The 62-case jump is the lowest increase in a week, when there was a 58-case increase on March 26, according to KSL.com data.

“The numbers are encouraging,” Utah Gov. Gary Herbert said at a press conference Thursday. “We are making some headway to stop the spread.”

The new numbers indicate a 6.1% increase in positive cases since yesterday, much lower than typical increase rates, which have mostly hovered between 10-15% in Utah.

Herbert added that though the data is promising and he hopes the trends continue, it’s still too soon to tell if the curve is flattening.

The governor issued a “Stay Safe, Stay Home” directive on March 27, but on Thursday, Salt Lake County Mayor Jenny Wilson called for a statewide stay-at-home order, which she said would help ease the burden for rural areas that might not have as many resources as areas on the Wasatch Front.

“By social distancing and staying at home, we will reduce our future crisis,” she said.

The county has authorized $1 million to go toward masks, ventilators and other medical equipment that will protect healthcare workers and treat patients at the area’s hospitals, Wilson said, but it is is still not getting the equipment needed to respond to the coronavirus crisis.

However, Salt Lake County is seeing evidence that social distancing measures are effective. Projections indicate that if there were no social restrictions put in place, the county would have hit nearly 500 cases of COVID-19 by March 18, nearly two weeks ago, according to data shared at a Thursday press conference. Presently, there are 449 cases in the county.

“Utah is one of only 11 states in the states that has not put in place a stay-at-home statewide mandate,” she said. “I want you to know I support a statewide mandate and even though our numbers right now are looking relatively good as a state, it doesn’t mean we should take our foot off the gas.”

Utah is one of 11 states without a statewide, stay-at-home order. I support a statewide order. Every county in the state relies on metropolitan hospitals for critical care needs. A statewide order is necessary to slow the spread everywhere so we don’t overwhelm our hospitals pic.twitter.com/BmhJ66031G

She noted the state’s good numbers are a reflection of stricter bans implemented in some cities and counties like Salt Lake and Summit County.

“It’s time that the rest of the state get on board,” she said.

Officials have been working to increase testing capacity to 7,000 people per day, according to Herbert. As many as 2,500 have been tested in Utah in a single day.

Health officials are hesitant to draw any conclusions about Thursday’s numbers due to the low number of tests reported, Utah Department of Health state epidemiologist Dr. Angela Dunn said.

There is still a 2-3 day data reporting lag for negative test results, she added. It’s possible the low number of tests reported reflects a change in demand for testing from over the weekend, she said.

The goal is to test 4,000 people per day as part of the initiative, according to Insidesales.com founder Dave Elkington. Two testing sites have already been set up, in Orem and south Provo, Elkington said.

The initiative is a public-private partnership between the state of Utah and several tech companies, including Insidesales.com, Domo, Qualtrics and Nomi Health.

There are several regions of Utah where people have been under-tested, including Utah County and southern Utah, according to Lt. Gov. Spencer Cox. Officials are hoping the tech testing initiative will help with that.

“This is going to be a game-changer for the state of Utah,” said Cox, who is coordinating the Utah COVID-19 Community Task Force. “Everybody can do something, everybody’s working to do something.”

Additionally, a public health assessment will be sent out Thursday to all Utahns that will ask them questions about their health to determine if a test is needed, according to Elkington. No private health data will be shared with the tech companies involved, he added.

The assessment can be found at testutah.com. People who are not exhibiting symptoms of COVID-19 can take the survey on the site, but at this point, the site does not recommend testing for people with no symptoms, Dunn said.

Evidence suggests that asymptomatic spread is likely for COVID-19 among people who are carrying the virus but not showing symptoms, Dunn added.

The numbers the state reports each day include the number of people currently infected with COVID-19, as well as those who have already recovered.

Before Thursday, the state was tracking people who contracted the disease but were visiting the state and are not from Utah. As of Thursday, the state has stopped tracking visitors who are infected to align with the guidelines from the Centers for Disease Control and Prevention. Those people will now be reported in their home states, according to the health department.

Even though the state is no longer tracking visitors, the health department is still identifying them and conducting a full public health investigation, including contact-tracing, for those individuals, Dunn said.

Herbert, Dunn and several representatives of Silicon Slopes discussed the current coronavirus situation in the state and the testutah.com initiative at the daily Utah Department of Health press conference on Thursday afternoon. Watch the full replay of the event below.

What questions do you have about the COVID-19 outbreak?