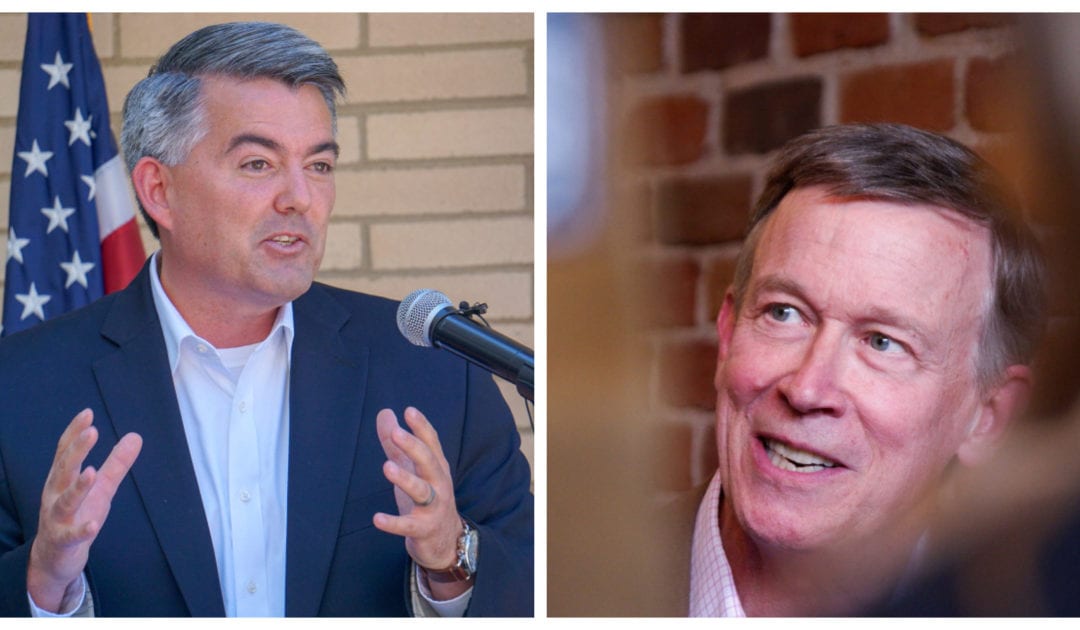 With 45 days until the 2020 election, Ruth Bader Ginsburg’s death promises to add more intensity to Colorado’s hotly contested U.S. Senate race and will likely force both campaigns to change strategy in the final stretch.

Within hours of the U.S. Supreme Court justice’s passing Friday at age 87, Democratic calls for Republican incumbent Cory Gardner to hold off on voting for a replacement until after the Nov. 3 contest started growing to a fever pitch.

“The Senate must not confirm a new Supreme Court Justice until after a new president is sworn in next year,” former Colorado Gov. John Hickenlooper, Gardner’s Democratic challenger, said in a written statement late Friday. “Sen. Gardner must uphold the commitment he set more than four years ago and allow the president elected in November to make this decision.”

The focus on the Supreme Court could make it more difficult for Gardner to continue working to sell his accomplishments to Coloradans and tear down Hickenlooper as he looks to close a significant deficit in his polling and approval numbers.

“It’s already hard for him to get that message through in a media environment that’s so focused on the pandemic and the economy and civil unrest,” said Seth Masket, a University of Denver political science professor. “This is just one more thing making it harder for him to focus voters on favorable ground for him.”

Gardner on Friday released a statement on Ginsburg’s death, calling her a “trailblazing leader.” But he didn’t address how he thinks Senate Republicans should handle replacing her. His spokespeople, both in his Senate office and for his reelection campaign, did not return multiple messages from The Colorado Sun seeking comment.

Then on Saturday afternoon, while speaking at Club 20 in Grand Junction, he declined to say whether he could vote to confirm a new justice before the November election. Now is a time to mourn, he said. “There is time for debate. There is time for politics,” he said. “But the time, for now, is to pray for the (Ginsburg) family and to make sure that we keep their family in our hearts and prayers as we mourn as a nation.”

Gardner was among the Senate Republicans in 2016 who successfully pushed to hold off on picking a replacement for conservative Justice Antonin Scalia after he died in February 2016, nine months before that year’s presidential contest. As a result, President Barack Obama’s nomination of jurist Merrick Garland to replace Scalia never moved forward.

Instead, Coloradan Neil Gorsuch was tapped by Trump to fill the vacancy on Jan. 31, 2017, just 11 days after the new president was sworn into office.

“I think we’re too close to the election,” Gardner said in arguing that the Senate hold off on replacing Scalia in 2016. “The president who is elected in November should be the one who makes this decision.”

Gardner, who has already become a source of national focus over how he may handle the situation given he’s in a difficult reelection bid, typically waits until the 11th hour to disclose his thinking on tough votes.

That’s how he handled the nomination of Justice Brett Kavanaugh, who faced sexual assault allegations, and Trump’s impeachment trial earlier this year, as well the president’s use of national emergency powers to fund the construction of a border wall in 2019.

The Washington Post reports that Majority Leader Mitch McConnell, R-Kentucky, circulated a letter Friday among GOP senators urging them all to “be cautious and keep your powder dry” on whether the Senate should move to confirm a Trump nominee to fill the liberal Ginsburg’s seat.

The effect of waiting to show his hand has led to immense media scrutiny and pressure on Gardner in the past, which could further distract from his reelection campaign’s messaging in the final weeks of the election season.

Gardner may be forced to make a decision on replacing Ginsburg sooner rather than later, however, with McConnell saying late Friday that the Senate will vote on Trump’s pick to replace Ginsburg, even though it’s an election year. Supreme Court nominations can take months to go through the Senate, meaning there’s pressure on Republicans to act quickly if they wish to install a new justice before the election.

On Saturday, Trump urged the Senate to vote “without delay” on filling Ginsburg’s seat. “We were put in this position of power and importance to make decisions for the people who so proudly elected us,” Trump tweeted, “the most important of which has long been considered to be the selection of United States Supreme Court Justices.”

Colorado’s Democratic U.S. Sen. Michael Bennet said Friday that he thinks the Senate should hold off on confirming a new justice until after the November election is decided. U.S. Rep. Jason Crow, D-Aurora, released a statement Friday night saying that he phoned Gardner and urged him to wait.

“I called Sen. Gardner urging him to honor his obligation to a power higher than rank partisanship,” Crow said in a written statement. “Sen. Gardner must commit to the people of Colorado that he will not replace Justice Ginsberg until after inauguration and to play by the rules he created. Our democracy cannot survive if we sacrifice the rule of law for political convenience.”

President Barack Obama also weighed in, saying in a statement that Senate Republicans must adhere to the same standard they set back in 2016.

Realistically, Senate Democrats don’t have much power to block a new Supreme Court pick from Trump. Their best bet is GOP defectors, and speculation is already growing around whether Gardner could join the ranks of moderate Republicans like Susan Collins of Maine, Lisa Murkowski of Alaska and Mitt Romney of Utah in possibly blocking a Trump selection.

“Never, ever underestimate Mitch McConnell when it comes to confirming judges,” said Tyler Sandberg, a Republican strategist in Colorado.

The situation presents peril for Gardner either way.

“There’s no way this wouldn’t be a controversial and very high profile vote, and this would force Gardner into the position of either very publicly agreeing with Trump or very publicly challenging him right before the election,” said Masket, the University of Denver professor. “And Gardner is strongest if people aren’t thinking about Trump. Chances are he’d vote for the nominee anyway, but this is likely not a vote he wants to cast one way or another.”

Gardner’s entire reelection campaign strategy is predicated on holding support among his Republican base, which polling shows adores Trump, while securing enough support from unaffiliated voters who don’t like the president but are willing to give Gardner another six years in office. That has required a delicate balance to begin with, one that likely is further complicated by the now-vacant Supreme Court seat.

While GOP support could harden in light of Ginsburg’s death, her passing is also likely to further energize Democratic voters in Colorado heading into the remaining weeks of the campaign.

Fundraising for Democratic candidates skyrocketed on Friday night, according to The New York Times, reaching, at one point, more than $100,000 a minute.

The Hickenlooper campaign declined to say if it received a fundraising boost, but it’s clear his campaign is planning to put pressure on Gardner over the situation given that it released a statement calling for him to hold off on picking Ginsburg’s successor just hours her death.

Hickenlooper in recent weeks has been attacking Gardner over health care and the senator’s response to the coronavirus crisis. That could shift to focus on, or at least include, the Supreme Court pick.

Speaking to volunteers making phone calls to voters on his behalf Saturday afternoon, Hickenlooper referenced Ginsburg’s death as he worked to fire up his supporters to help his campaign and emphasize the stakes of his election. “I wish this is a moment where we could take time to mourn,” he said.

If Gardner does decide to support advancing a Supreme Court nomination before the election, Democrats will certainly paint him as a hypocrite. Progressive groups began laying the groundwork for that line of attack on Friday night.

Meanwhile, a vigil in Denver’s City Park on Friday night drew a small crowd of mourners and Democratic leaders, who called on voters to act in November.

“It was reported that days before her death, Justice Ginsburg said, ‘My most fervent wish is that I will not be replaced until a new president is installed.’ We must honor her legacy by fighting like hell to make sure that happens,” state Rep. Leslie Herod, D-Denver, said in a written statement.

Tay Anderson, a Denver Public Schools board member and liberal activist, started raising money through GoFundMe to send people to Washington to lobby Gardner to wait on filling Ginsburg’s seat.

Laura Chapin, spokeswoman for the Colorado abortion rights group Cobalt, said Ginsburg’s death makes more salient the organization’s arguments that Gardner is a threat to women’s reproductive health care. Another Republican pick for the court would almost certainly put the 1973 Roe v. Wade decision, which allowed women to have an abortion without excessive government restriction, in a more precarious position.

“He’s already put two justices on the court who voted against Roe,” Chapin said of Gardner. “Now, he would put a third.”

Chapin said she expects Ginsburg’s death to drive women to the polls in November, and “it’s not like they weren’t motivated already.”