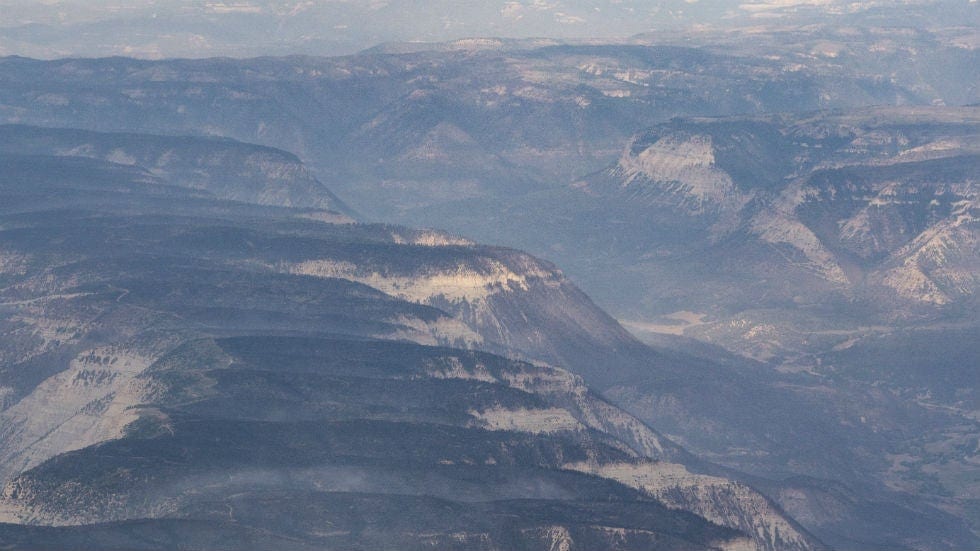 Northern Colorado’s Rocky Mountain National Park officially closed to all visitors Thursday after a wildfire in the state grew six times in size over a 24-hour period.

The national park announced the news in and in a tweet, which said that “air quality is hazardous” due to the blaze, adding that it was a “rapidly evolving situation.”

All of #RMNP is closed to visitors due to fire activity on the west side of the Continental Divide. If conditions allow, an Infrared flight is planned to gauge where there is current fire activity. This is a rapidly evolving situation. Currently, air quality is hazardous #RMNP.

The park on Wednesday had issued stating that the west side of Rocky Mountain would be closed to visitors “due to significant fire activity on the East Troublesome Creek Fire outside of the park.”

“Travelers should be aware of smoke, wind, weather and fire conditions as fire activity is rapidly changing and road closures may be put in place quickly,” public affairs officer Kyle Patterson said in Wednesday’s statement.

According to , the East Troublesome Fire grew to about 125,600 acres Thursday morning, extending into Rocky Mountain, with an unknown number of structures reportedly destroyed.

The Post reported that hundreds were forced to evacuate overnight from the Colorado towns of Grand Lake and Granby, with more evacuations anticipated throughout Thursday.

The East Troublesome Fire is now the fourth-largest wildfire in Colorado history, with the Post reporting that three of the state’s five largest wildfires on record occurred in 2020.

Noel Livingston, who leads the team of firefighters combating the East Troublesome blaze, told the Post Thursday that the rapid growth of this fire was likely caused by the thick stands of trees, many of which had been weakened or killed by beetle invasions in recent years, a phenomena across the West and into Canada that experts have linked to climate change.

California has also had its most devastating wildfire season in history, with more than 4 million acres and 9,200 homes and other structures destroyed across the state.

The Post reported that as of Thursday, this year’s California wildfires have left 31 people dead.

Donald John TrumpJudge rules to not release Russia probe documents over Trump tweets Trump and advisers considering firing FBI director after election: WaPo Obama to campaign for Biden in Florida to California just hours after the White House and the Federal Emergency Management Agency initially said California hadn’t made a strong enough case for assistance with the September fires that cost the state more than $229 million.

“The governor and Leader McCarthy spoke and presented a convincing case and additional on-the-ground perspective for reconsideration leading the president to approve the declaration,” the White House said in a statement.