Rockies Mailbag: Is Matt Kemp key for a Colorado run in the playoffs? 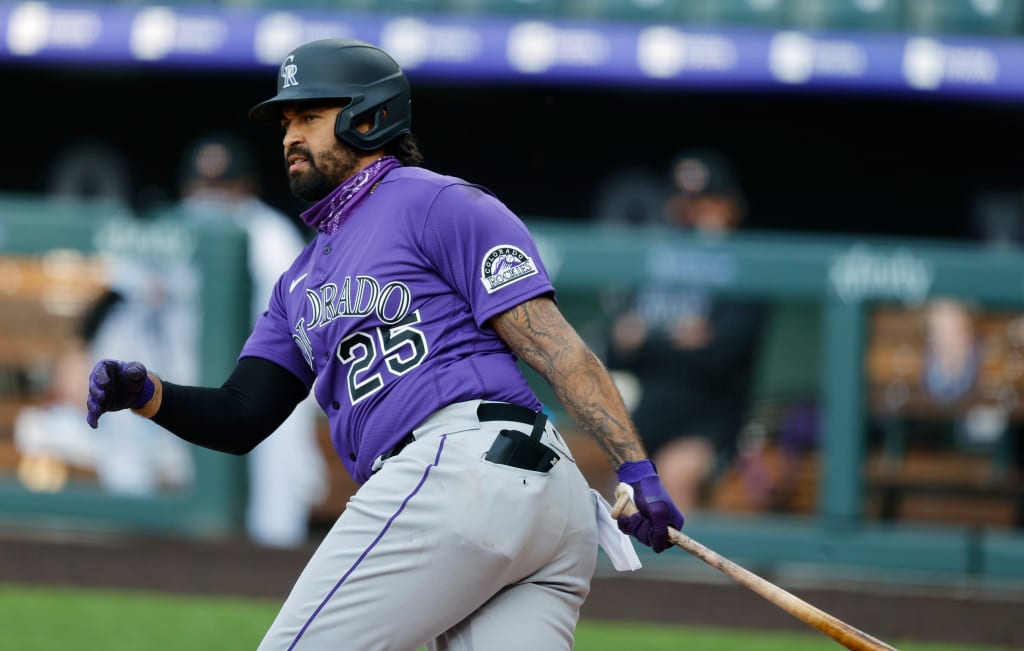 Why has Josh Fuentes not gotten a chance to play. He killed it during the summer camp.

Dean, the simple answer is that there are other players in front of him who are better and more seasoned. Fuentes plays third base and first base, leaving him behind Nolan Arenado (his cousin) at third and behind Daniel Murphy and Ryan McMahon at first. Plus, Matt Kemp is killing it as a DH and as a bat off the bench

Manager Bud Black indicated Monday that Fuentes will see some playing time soon. The game plan, however, is to play the starters as much as possible during this 60-game season. I don’t know if Arenado or shortstop Trevor Story will play in all 60 games, but they’ll come close.

Plus, Murphy is off to a hot start and looks good around the first base bag.

Bottom line: Fuentes will get some limited playing time, probably soon, but he’s not going to see much action unless there is an injury or a gigantic slump by players in front of him.

What does the squiggly line on the pitcher’s mound say? Or is it just a design?

Lena, the image you see is not actually on the pitcher’s mound. It’s a digital advertising image on the TV picture. The “squiggly line,” I believe, is for Arrow Electronics, which has its global offices in Denver. There are other advertisers using that digital space as well.

I know the season’s still young, but Matt Kemp looks like he was an absolute steal. Many fans, yours truly included, were heavily critical of (general manager) Jeff Bridich’s lack of moves in the offseason. Do you think the whole staying-the-course approach could lead us to success this year? Or is the Rockies’ depth too shallow?

Phillip, you’re absolutely right about Kemp, not to mention right-handed reliever Daniel Bard and utility player Chris Owings. All three players have been instrumental to Colorado’s hot start, and all three players were signed to under-the-radar minor-league deals.

You have to tip your cap to Bridich and the front office for their excellent, cost-friendly moves.

Regarding Kemp, he hit 1-for-4 with the game-tying RBI single in the sixth inning in Colorado’s win over San Francisco Monday night. He is 4-for-5 with runners in scoring position this season, and in four starts, he’s hit 5-for-15 (.357) with two home runs and five RBIs. He gives the Rockies right-handed thunder off the bench, something the team needed. In another year, without a designated hitter in the National League, he might not have signed with Colorado, but he’s been a blast to watch (pun intended).

I think the Rockies have more than enough position-player depth to make the playoffs. I do have concerns about bullpen depth, especially now that Scott Oberg is likely out for the rest of the season. If the Rockies are in the mix to make a playoff run, trading for a late-game reliever is a possibility.

I’m at a loss. At a time when the Rockies appear to be winners I cannot get the broadcasts because of blackouts in Denver. I have Roku and I am subscribing to MLB.com but the games have all been blacked out. Is there anything besides DirecTV that would allow me to get those broadcasts?

Herm, I’m no expert at any of this. I have Comcast cable, so I know that Rockies games are carried on Comcast, as well as DirecTV.

You say you are subscribing to MLB.com, by that I think you mean MLB.TV, which is a streaming service that allows you to watch out-of-market games. The problem is, of course, that Rockies games are blacked out to the market covered by AT&T SportsNet, which owns the rights to Rockies games.

I don’t have a solution for you. Perhaps another fan can help you out.

I haven’t seen a list of the other 26 players that are working out as part of the Rockies’ expanded roster. Who are they? Will they be doing this all season? Why have they not maxed out the number of players? Besides having an available pool of players, what other goals are they trying to accomplish at Metro State? Lots of questions.

Let’s start off with the list of players who are working out at the Rockies “satellite camp” at Metro State University:

The primary reason for the 60-man player pool, of course, is to have players available for the big-league team in the event of injuries or poor performance. Without any minor league baseball this year, clubs need a pool of players that can be moved up and down during the season.

Working out at Metro also keeps players in baseball shape, allows them to play in intrasquad games and gives the coaches a chance to work with the players and evaluate them.

How will postseason eligibility be determined if some teams may not be able to play 60 games due to COVID-19? Also, now that the Rockies are playing with a DH every game, it would be helpful to understand specific scenarios. For example, can a DH be switched to be a position player mid-game, and then the team can appoint a different DH?

Judy, you sure make me work, don’t you? But those are two excellent questions.

First, here is what commissioner Rob Manfred told The Associated Press about how Major League Baseball will deal with a season in which some teams are likely to play fewer games than others:

“We’ve got to be flexible on that,” Manfred said. “Look, this is one of the reasons that we revisited the issue off the expanded playoffs (to 16 teams). If it turns out that some guys play 60, some guys play 58, they have this new thing called winning percentage. We can sort that out.”

As for your question on the designated hitter, I am going to take the easy route and quote directly from Baseball Reference:

The DH can play in the field, but once a manager decides to play him on defense, the pitcher immediately takes over the batting spot of the defensive player which the DH replaced (unless there are multiple substitutions, in which case the manager can decide where the pitcher will bat). The team then forfeits the use of the DH for the rest of the game. This happens a few times every season, and sometimes results in a pitcher being forced to bat in an AL game.

The DH spot is locked in the order. If the DH bats, for example, fifth in the order, no substitution can be made to move him to fourth or sixth, or anywhere else.

Hi Patrick, when is Trevor Story due for that big contract? Can the Rockies afford to sign him and keep Nolan Arenado? So happy you’ve got work. Yahoo! Loving Rockies baseball way up north. Thank you!

Thanks, Dan. Alaska is on my bucket list. If I make it to Juneau, will you buy me a beer?

Story is scheduled to become a free agent after the 2021 season. That’s the same time in which Arenado can opt out of the remainder of his eight-year, $260 million contract.

Before the coronavirus, and all of the implications it has on future baseball free agency, I was sure that Arenado would opt out and possibly clear salary space for Story. But now, with the free-agent market likely to become less lucrative, there are questions about Arenado’s future. He could still be traded and that could open up money for Story. Can the Rockies afford to keep both, plus pay Charlie Blackmon? It seems doubtful to me.