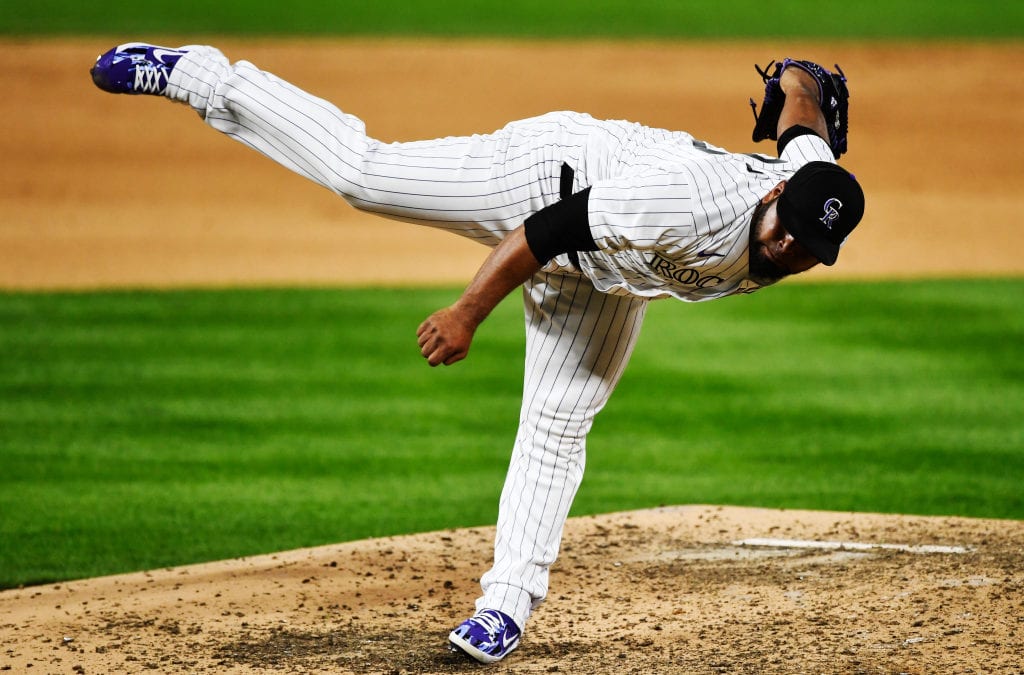 Coors Field can wilt the confidence of even an accomplished closer. Witness what has happened to Wade Davis, with his 12.24 ERA at Coors since the start of last year, leading to his startling inability to seal wins in LoDo.

Enter Jairo Diaz, the hard-throwing right-hander who has been thrust into the closer role. The Rockies are counting on the 29-year-old to bring stability to the bullpen’s back end amid Colorado’s strong start.

“To have that burden on your shoulders, and the responsibility of the last inning, you also have to have the mental toughness to rebound if things don’t go your way,” manager Bud Black said. “You have to be able put bad games aside quickly and be ready the next night. For a lot of players, that’s awful hard. For Jairo, my sense is he’s going to be able to handle that.”

After all, he’s come back from Tommy Johnson surgery and the tragic death of his wife from cancer.

Davis, following a four-run blown save in the home opener, was put on the injured list with a shoulder strain Aug. 2. That move came the same day right-hander Scott Oberg, who would’ve been the team’s closer following a strong 2019 season, likely saw his season ended by blood clots for the second straight summer.

That led to the job falling to Diaz, who had five saves in eight chances down the stretch in 2019 following seasoning as a closer with Triple-A Albuquerque. Entering the weekend, the right-hander had converted all three of his save opportunities and had a 1.35 ERA in seven appearances, which included the Venezuelan working out of some high-wire jams in Texas, Oakland and Denver.

“I’m taking in this new role, and I’m going to be ready for whatever situation comes up and whenever the team needs me,” Diaz said. “I don’t want traffic, but thank God, when there’s been guys on base, so far I’ve been able to dig down and get out of it.”

Diaz’s grit has not gone unnoticed by teammates, especially as the Rockies are hoping their relatively inexperienced bullpen can stand the test of an abbreviated 60-game season after the unit was one of the team’s Achilles’ heels last year with a 5.18 ERA.

“He has that calm, cool demeanor where he doesn’t get rattled,” outfielder Charlie Blackmon said. “As you saw Monday night (against San Francisco), when things don’t go his way and it got a bit dicey for a moment there, he didn’t seem fazed by it. He continued to pitch, and that’s how he’s getting out of jams.”

Diaz relies on his slider, which he has thrown 60% percent of the time, while mixing in his sinker (24%) and fastball (16%). Once able to throw 103 mph as a young prospect with the Angels, Diaz’s fastball now averages around 95, but he’s found traction as a major leaguer due to increased command.

“For him, fundamentally, (the success) comes from locating that fastball, the four-seam fastball and the two-seam that has great run and sink,” Black said. “He’s got a great slider and he’s got to be able to command it down below the (strike) zone, and have the ability to backdoor it when he wants.”

The release of veteran relief pitchers Jake McGee and Bryan Shaw before the season began opened the door for increased opportunities for Diaz, even before Davis and Oberg’s trips to the IL. From that moment forward, Diaz knew he was in for a bigger role this season, and he’s embraced the opportunity.

“Obviously I wasn’t hoping for that (for my teammates), but when that happened, I knew there were going to be (expectations) that I needed to fulfill,” Diaz said. “I knew that I was ready for it.”

One of the team’s starters, Kyle Freeland, is “looking forward to continue to watch (Diaz) step up.”

“What he showed last year, and the steps he showed he could take to get back to the big leagues, is great,” Freeland said. “He’s already showed he can be a quality back-end bullpen guy who is capable of stepping into a big role when we need him.”

And while Diaz balances an intense demeanor on the mound with a carefree, jovial attitude off it — a perspective on life that the loss of a spouse has underscored for him — Black said other Rockies relievers will get their chance to take the ball in the ninth as the team is “still working through giving that role to Jairo.”

Since returning to the game after losing his wife in October 2017, before which he temporarily paused his career to be by her side, Diaz persevered through being released, and re-signed, by Colorado in 2018.

Colorado’s other ninth-inning pitchers include Yency Almonte, a starter-turned-reliever who notched his first career save on Tuesday, as well as fellow right-handers Carlos Estevez, Tyler Kinley and Daniel Bard.

“(After McGee and Shaw were released), we knew it was about making sure we’re making the most of every opportunity we get,” Almonte said. “I think we’ve all done that thus far.”