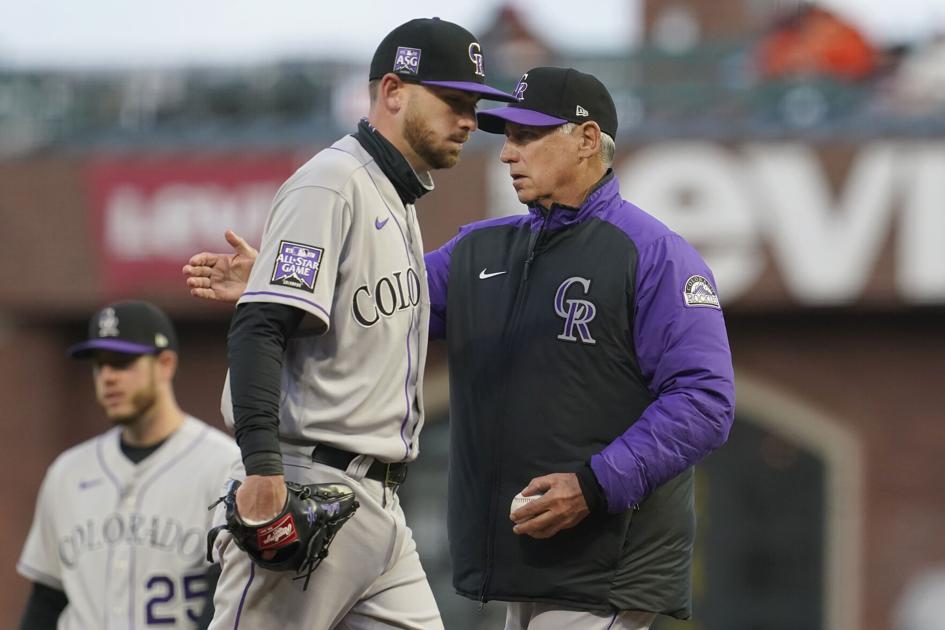 The road trip woes continue for the Rockies.

After dropping all six games on their first road trip, including three to the Giants, the Rockies regrouped. They returned to Coors Field last week, where they won five out of eight games.

They said they got their confidence back, and that they were ready to face the Giants again in San Francisco. Instead though, the Rockies were blown out 12-0 to start a seven-game road trip. It’s the first time the Rockies have started the season 0-7 on the road.

On the mound was Austin Gomber, who was the centerpiece of the Nolan Arenado trade that now former general manager Jeff Bridich orchestrated. Bridich stepped down Monday morning.

Since his first start of the season, when Gomber gave up three runs in three innings, he has been solid. His curveball has become especially dangerous, striking out five in his last start.

But on Monday, none of his pitches were working for him. Gomber struck out leadoff hitter Austin Slater with that curveball, but it was high above the zone. His fastball was consistently too high, his slider to the left and down. He threw just 10 curveballs, and half were down.

“A lot of the hits were middle of the plate,” Gomber said. “I think it was about execution and putting myself in bad counts. They had a good game plan. I tried to do the same thing attack wise and approach wise the last time I was here and they were on it.”

Gomber threw a total of 64 pitches, and nearly faced the entire Giants lineup twice before he was removed in the second inning. He allowed eight hits and four walks as he dug the Rockies into a 6-0 hole.

“They jumped on Austin,” manager Bud Black said. “He made some mistakes. We are going to look at video to see if they had something on him. There were some at-bats, especially on the curveball. I think they had a good approach against him.”

Jhoulys Chacin, fresh off allowing three runs in two-thirds of an inning Saturday, came in for Gomber with two outs in the second inning. On his second pitch, he gave up a double that brought in three more runs. Chacin allowed one more run in the fourth.

Tyler Kinley came in for the sixth, walking the first batter and then giving up a home run to Buster Posey.

Things got so bad in the bottom of the eighth that the Rockies put infielder Josh Fuentes on the mound. He threw nine pitches, six of which were strikes. He allowed one hit and no runs, making him the Rockies best pitcher Monday.

Black said they considered both Fuentes and outfielder Sam Hilliard, but decided on Fuentes.

“I never like to do that,” Black said on putting a position player on the mound. “I dislike it a lot. But tonight’s game I thought warranted that.”

The Rockies didn’t do themselves any favor on offense. A night after scoring 12 runs against the Phillies, the Rockies couldn’t muster one. It looked strikingly similar to the last time they were in San Francisco, when they had just four runs in the three-game series and finished one night with just two hits.

They had only two hits Monday — a single in the second by Yonathan Daza in the fourth and a base hit by Raimel Tapia in the sixth. Tapia has a hit in eight straight games.

“It was a tale of two nights for two different starting pitchers,” Black said. “I thought we hit the ball hard a few times; there was nothing to show for it.”