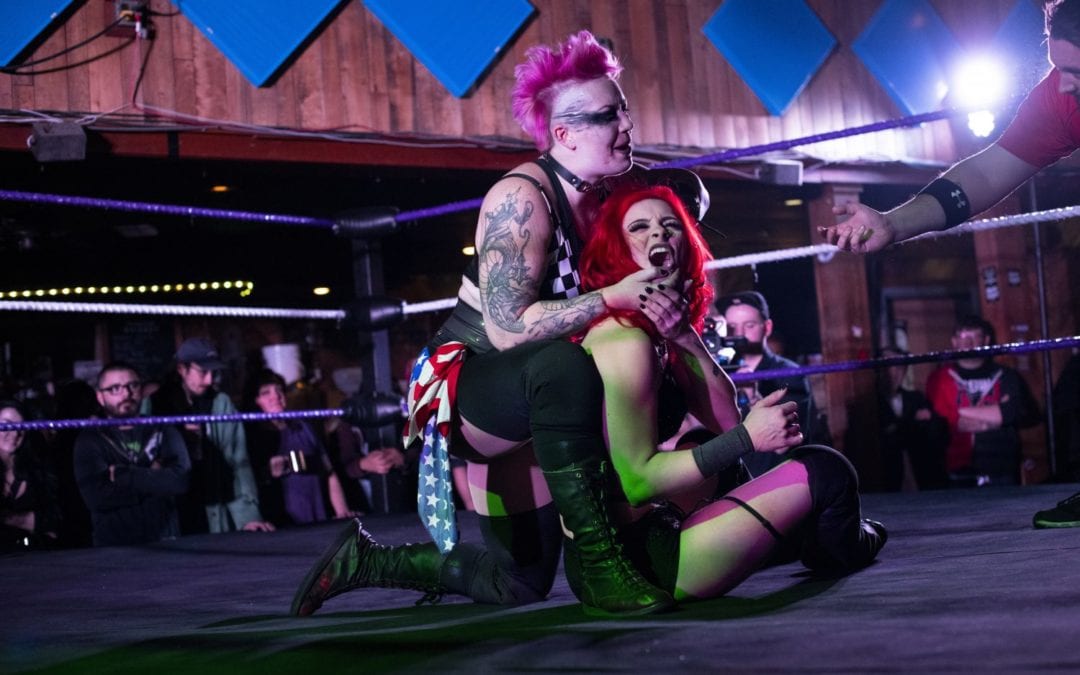 Women’s wrestling may not top the list of things most people are missing right now, but for Denver’s professional-wrestling community, the loss has been devastating.

“I still train every single day,” said 27-year-old Cerra Reichel-Hodges, a graphic designer and body builder who goes by Lilith Grimm inside the padded ring. “I was actually supposed to start in April but then the world decided, ‘Nope!’ So I’ve only been wrestling since June.”

Those Colorado wrestlers — and more traveling in from out of state — will get their next chance in the ring on Sunday, Oct. 4, when the Respect Women’s Wrestling series returns. Launched in January 2019 as Colorado’s first all-women wrestling event, the series held roughly one show per month at South Broadway music venue Herman’s Hideaway before it was forced to shut down in March due to state health mandates.

But founder Nick Gossert, who runs the wildly popular, longstanding Lucha Libre & Laughs wrestling-comedy show, has found a creative way around that for his latest matches, which will be presented in two separate shows this weekend.

“We were able to get 20 feet between the ring and the audience because of the venue’s size, and there will be social distancing, mask requirements, and hand sanitizer everywhere,” Gossert, 42, said. “I also go in and disinfect the ring between matches.”

Wrestlers, who must be healthy but will not be given temperature checks, say the skin-to-skin risk is worth it. As with Roller Derby, viewers shouldn’t let their outlandish personas, costumes, makeup and catchphrases fool anyone. This is serious business for them.

“Unfortunately, during pandemic times, it’s really eliminated those spots in the match where you’re staring into someone’s eyes or breathing into their mouth,” said Sarah Slack, 31, who wrestles as the sharp-looking bruiser Heidi Howitzer. “But I can still chase people around with a chainsaw.”

However, she won’t be picking up audience members and using them as slam-props — as she did during the last Respect Women’s Wrestling show in February.

“We had a real draw and were packing out those Herman’s shows,” she said. “We were really building something.”

As the only professional women’s wrestling series in Colorado, Respect Women’s Wrestling is helping set the tone for future matches with its upcoming live experiment. But Colorado’s wrestling community, which includes gyms such as Mercury Pro Wrestling Academy, isn’t sitting down in the meantime.

Slack, as Howitzer, has only been wrestling for two years but has already gotten much better thanks to the brutal matches she has pieced together since the pandemic began, she said. She recently battled Japanese legend Kikutaro, who wears a cartoon head in the ring, in an intergender match at the Aug. 22 Lucha Libre & Laughs show at the Oriental. She hopes to one day land a spot on national TV like her colleague Ortega (a.k.a. Allie Gato).

While Gossert is often successful in bringing in “TV-level talent” to his matches, Ortega is already there. She made her WWE (World Wrestling Entertainment) debut at the Pepsi Center on Oct. 18, 2016, when she battled star Natalya as part of WWE Smackdown. She also has won national titles (including the All Elite Wrestling belt) and competed against National Wrestling Alliance champ Thunderosa in February.

“I’ve grown, even over this past year, and I feel like a different person and wrestler,” said Ortega, who has been wrestling for about five years. “Having Nick bring in all these athletes from around the country has done a lot for us.”

“By its nature, putting on an all-women wrestling show sends a political message,” Gossert said. “And while I love comedy, I didn’t want to be present it as ‘only funny’ and crap all over that message. I bring in awesome talent, let the locals go out there and do their thing, and just get the hell out of the way.”