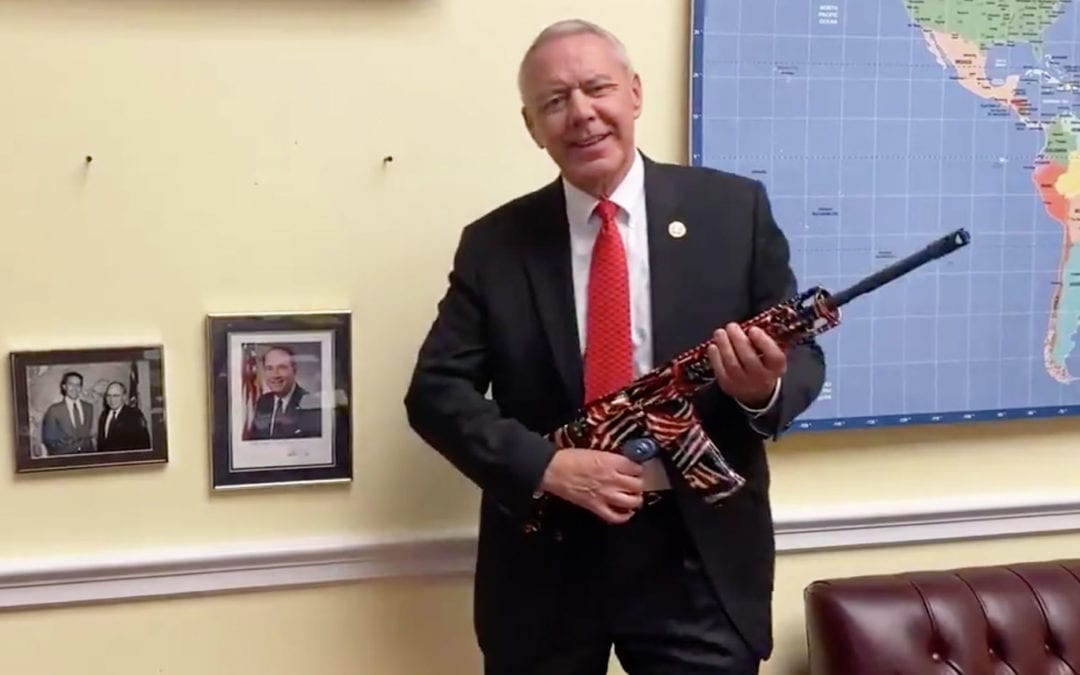 “I have a message for Joe Biden and Beto O’Rourke, if you want to take everyone’s AR-15s in America, why don’t you swing by my office in Washington, D.C. and start with this one,” Buck said in the video on his office’s website.

The video of Buck with the rifle, which was wrapped in an American flag design, was in response to O’Rourke’s stance against high-powered assault rifles being in civilian hands, and Biden’s reference earlier this week that he would tap O’Rourke to help him “take care of the gun problem.”

Buck’s office noted that O’Rourke, a former Texas congressman who ran for the Democratic presidential nomination last year, had said in a Democratic debate, “hell yes, we’re going to take your AR-15, your AK-47.”

Before he made that comment, O’Rourke had been asked at the debate whether he proposed to take away those types of weapons.

Biden, the front-runner for the Democratic nomination, on Monday said at a rally of O’Rourke that “I want to make something clear —  I’m gonna guarantee you, this is not the last you’re seeing of this guy — you’re gonna take care of the gun problem with me, you’re gonna be the one who leads this effort.”

O’Rourke fired back at Buck on Twitter on Friday, writing, “This guy makes the case for both an assault weapons ban and a mandatory buyback program better than I ever could.”

“These are weapons of war that have no place in our communities, in our politics or in our public discourse,” O’Rourke wrote.

A spokesman for Biden’s campaign did not immediately respond to a request for comment on Buck’s video.

Fred Guttenberg, whose 14-year-old daughter Jaime died in the Parkland, Florida, school shooting in 2018, replied to Buck on Twitter, saying that if he had seen the congressman’s video “yesterday when in DC I gladly would have” visited his office.

“My daughter died from a single AR 15 bullet. You may find joy in that, I don’t,” wrote Guttenberg, who has endorsed Biden’s candidacy. “I will gladly come back to DC to discuss your AR 15 and removing it for safe storage. Do not make threats of AR 15 violence.”

Buck said in a statement on his office website, “I have always been a strong supporter of the 2nd Amendment and will continue to stand up to any attacks on the law-abiding gun owners of Colorado’s Fourth District.”

Buck was just one of two House members, the other being Andy Biggs, R-Ariz., who voted Wednesday against the $8.3 billion in emergency funding to combat the coronavirus outbreak. That funding passed the House 415-2, and was signed by President Donald Trump on Friday.

Buck’s fellow congressman, Rep. Ruben Gallego, D-Ariz., blasted him in a Twitter reply for violating a cardinal rule of handling a gun by pointing it at the person who shot the video.

“You literally flagged the camera man. First rule of weapons handling, treat every weapon as if it were loaded,” wrote Gallego, who served as a Marine in Iraq. “Second rule, never point the weapon at anything you don’t intend to shoot.”

Buck has permission to have the AR-15 in the U.S. Capitol because he is a member of Congress. It is illegal for nonmembers of Congress to bring a gun into the Capitol.

Buck told The Washington Post in 2015 that the AR-15 he keeps in his office is unloaded and has a trigger lock. He said he also had the bolt carrier assembly, which is required to actually fire the rifle, removed before it came to Washington.

In June 2017, a left-wing activist from Illinois named James Hodgkinson, who was armed with a semi-automatic rifle and a 9 mm pistol shot then-House Minority Whip Steve Scalise, R-La., U.S Capitol police officer Chrystal Griner, congressional aide Zack Barth and a lobbyist, Matt Mika, while they were practicing for the Congressional Baseball Game for Charity in Alexandria, Virginia. They all survived the shooting.

Hodgkinson died after a shootout with police.

In January 2011, then-Rep. Gabby Giffords, D-Ariz., was shot in the head while meeting with constituents outside a supermarket in her home state. Giffords, who survived, was shot by a man, Jared Lee Loughner, who was armed with a 9 mm semi-automatic pistol that had a 33-round magazine. Six other people died in the attack.

Correction: James Hodgkinson was the shooter at a congressional baseball practice in June 2017. An earlier version misspelled his name.