Rejected ballots top 10,000 in Colorado. And election officials are working to get them counted. 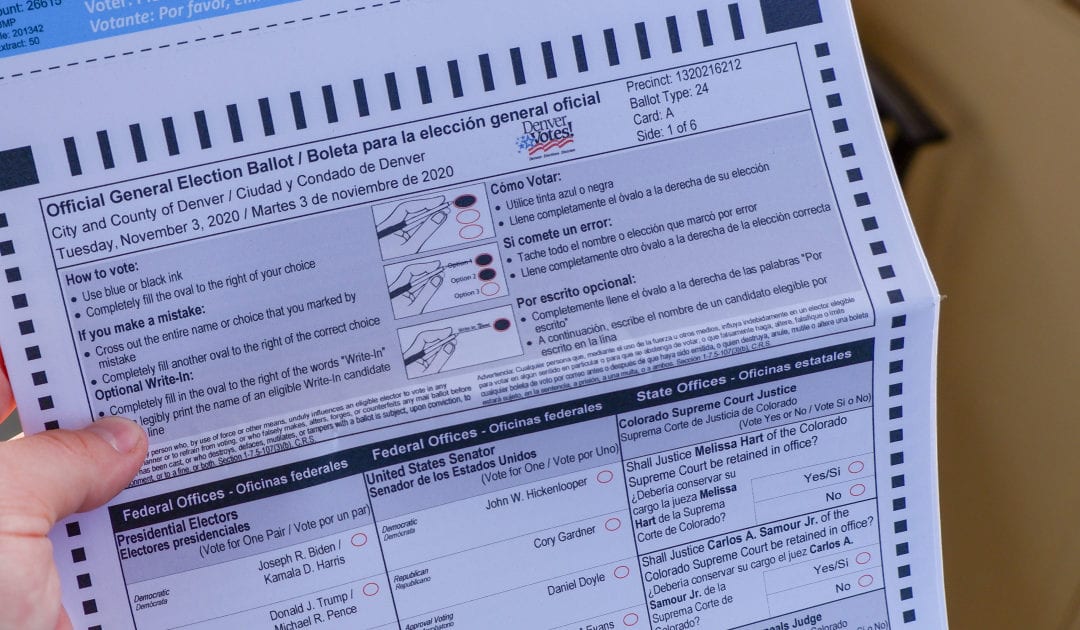 Jesus Balderrama voted for the first time in a presidential election this year. But a few days after sending in his ballot, which the Grand Junction resident marked for Democrat Joe Biden, he received a letter from election officials about a discrepancy with his signature.

The letter directed Balderrama to send a text to a number, which in turn sent him a website link. He visited the website and verified his identity by signing an affidavit and submitting a photo of his ID.

“It was quick, took like five minutes,” he said. “Pretty cool.”

This year, Colorado election officials are making an extra effort to address the fact that roughly 90% of all mail ballots that get rejected could have been fixed and counted. The text-to-cure program that Balderrama described is just one step.

Ballot-return data shows more than 10,000 mail ballots had been rejected through midday Wednesday, an analysis by The Colorado Sun found. That represents 0.5% of total ballots cast to date, below the average rate of 0.86% for the past two elections.

But the proportion of rejected ballots is expected to rise through Election Day. In 2016, more than 24,000 ballots didn’t count. And the trend lines show young voters like Balderrama are once again being disproportionately affected.

Colorado voters under age 35 account for over half of all rejected ballots this year, the Sun’s analysis showed. The rate is higher for younger voters in part because their signatures are more difficult to verify due to a lack of data in the state election system, officials said.

Across all age groups, The Sun found that 85% of all rejected ballots so far were turned down by the state due to an issue with the signature. It represents an increase from the average rate of 66% for signature discrepancies.

Josh Zygielbaum, the Adams County clerk, said he’s not concerned by the numbers so far. In his county, about 1,200 ballots have been rejected so far, or about 0.9% of those returned.

“We expect the number to stay consistent, and it’s pretty consistent to what we’ve seen in recent elections, which is a good thing,” he said in an interview. “We aren’t forcing signatures through that shouldn’t be sent through and we certainly are not rejecting any more than we need to.”

The largest numbers of rejected ballots are in Arapahoe and El Paso counties, which combine to account for 41% of the total. About 1 in 100 ballots in each county are not being counted because of an error made by the voter.

When a ballot is rejected, county officials are required to send letters to voters whose ballots need to be fixed and provide them with next steps. Voters can use the text to vote system to remedy their ballots.

A handful of the voters affected told The Sun they were promptly notified by county officials that their ballot had been rejected and were given easy-to-follow steps to remedy it. But some said they were surprised their county rejected their ballot.

Sarafina Milianti, a Thornton Democrat who voted for Biden, said the process to resolve her ballot issue was “super straightforward.” Milianti had to provide a form of identification because she was voting by mail for the first time.

“I wasn’t sure how I would find out if it was good to go or not, so I guess this was helpful,” she said.

David Benson, who voted for Libertarian presidential candidate Jo Jorgensen, said he wasn’t surprised he had a signature verification issue because he has changed his signature a few times throughout his life.

He said he heard from the county three days after dropping off his ballot that his signature didn’t match and it took about 10 minutes to verify his signature online. “It was pretty easy,” he said.

Other voters are less certain about the system. Chans Copeland, who is registered to vote in Colorado Springs but currently lives in Maryland, voted by mail. He said he thought an election official found out he was voting for Republicans and rejected his ballot because of it. “I feel like it’s a very biased partisan thing,” he said.

The signature verification process requires a bipartisan team of judges, and El Paso County clerk and recorder is a Republican.

Copeland said he voted over a month ago but was just notified by the county last week. He doesn’t have time, he said, to follow the steps outlined by the county to verify his vote and insists he did nothing wrong in filling out his ballot. “They’ve made it really hard for me to get my vote in,” he said.

Zygielbaum, the Adams County clerk, said the onus is on voters to verify their identities and correct issues.

“Ultimately it’s up to them if they choose to do that,” he said. “They have up to eight days after the election to cure their ballots. There’s still a couple weeks left for that to happen.”