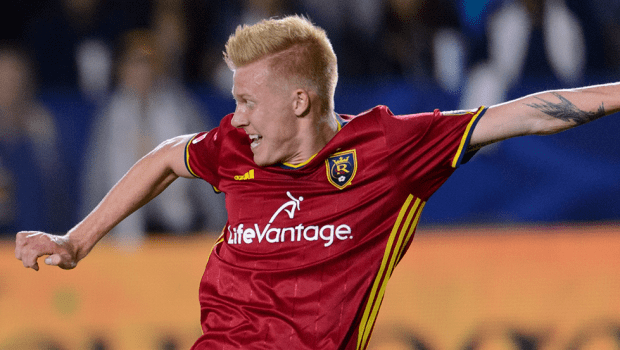 Ahead of the MLS is Back Tournament, Real Salt Lake find themselves in one of the more challenging groups.

In Sporting Kansas City, Minnesota United and Colorado Rapids, RSL are grouped up with three of the four teams in MLS that started the 2020 season 2-0-0 (Atlanta United being the other), with Sporting KC and Minnesota each getting off to particularly roaring starts. Behind new acquisitions Alan Pulido and Gadi Kinda, Sporting tore apart the Vancouver Whitecaps and Houston Dynamo in Weeks 1 and 2, while Minnesota bagged a pair of impressive road victories over the Portland Timbers and San Jose Earthquakes by a combined score of 8-3.

While the Rapids were less flashy about it, getting 2-1 wins over D.C. United and Orlando City SC, they looked like an improved and challenging foe in their first full season under new head coach Robin Fraser.

Speaking with reporters over Zoom on Tuesday, though, RSL defenders Justen Glad and Aaron Herrera said they’re not looking at the group as a disadvantage. Rather, they said they’re relishing the challenge, especially given the rivalry implications that come with the Sporting and Colorado matchups, and the chance they have to play against some of their friends from the US U-23 national team on Minnesota United. Glad and Herrera said they’re both close with Minnesota’s Hassani Dotson, Mason Toye and Chase Gasper, who they frequently roomed next to on U-23 trips.

“I think our group is pretty good,” Glad said. “I’m excited to play Sporting and Colorado, for me I look forward to those games just because there is a little something extra behind it.”

Added Herrera: “It’s always exciting when you play your rivals and we’ve got a couple friends on Minnesota, so that’ll be fun also. It’s kind of the group we expected, there’s almost a rivalry in every group, so that’ll be fun.”

Still, coming off such a long layoff and jumping headlong into a group of formidable foes would be a challenge for any club. Glad said he’s been pleased with how the team has regained its fitness and chemistry since resuming full training, with the hope being that the work they’ve been doing in training and the incentive of regular-season points and a Concacaf Champions League league berth for the winner of the tournament will keep motivation plenty high regardless of who they’re lining up against.

“We have to find that in ourselves individually,” Glad said. “[Head coach] Freddy [Juarez] and the coaching staff, they’re pushing us every day and making sure the energy is high so that we’re motivated. We know that this isn’t just something we’re going to go do just because, we need actually go and [perform]. People are playing for contracts and all that, so there’s still stuff on the line that’s worth fighting for.