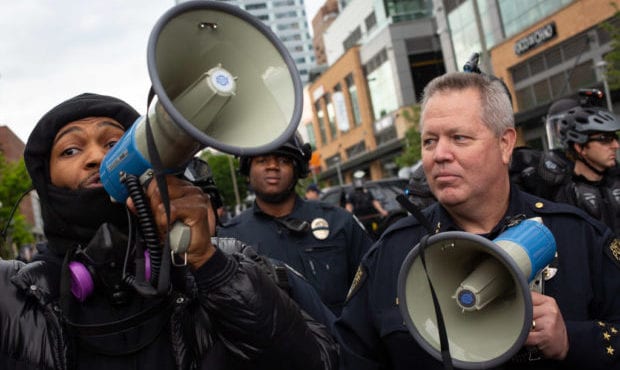 A demonstrator wields a megaphone next to Bellevue Police Chief Steve Mylett as they converse during a gathering to protest the recent death of George Floyd on May 31, 2020 in Bellevue, Washington. (Photo by David Ryder/Getty Images)

Police Chief Steve Mylett may leave his role in Bellevue for Thornton, Colorado, where he has been named a finalist in their search for a new chief.

Mylett has not yet been interviewed as one of the finalists but he is interested in the job. The impetus for the move, should he be offered the job and accept it, is driven in part by family: his daughter lives near the city.

Thornton began their search for a new chief in May after the retirement of Chief Randy Nelson.

Mylett, who has held his post in Bellevue since April 2015, has earned a reputation for his deep commitment to his community. Indeed, much of the department’s policing has been community-oriented.

In the aftermath of the George Floyd killing, Mylett dealt with both an organized crime ring that brought looting to the city and mostly peaceful, but tense community protests. While his officers handled the looters and agitators, Mylett spoke directly with youth protesters, at one point taking a knee in solidarity. It was seen as a unifying moment for the region.

“Bellevue has been incredibly lucky to have Steve Mylett as our police chief for the past five years,” Bellevue City Councilwoman Jennifer Robertson tells the Jason Rantz Show on KTTH. “He has been a strong leader, a great advocate for his department and has earned the trust of the people of Bellevue. He has made policing more inclusive which has in turn made Bellevue safer and a better place to live. If he moves on to another job, I will be sorry to see him go but will wish him and his family all the best.”

For Mylett, his connection to the community, understanding different perspectives and feeling close to those he serves, has been a key to his success.

After a 2019 murder, the first in three years, Mylett worked with his force to quickly develop a strategy to tackle the escalating gang violence in the Crossroads community.

“After the homicide, we did our emphasis patrol where we were very visible with our bike units, our patrol officers, they held briefings out there at the Crossroads substation, and then the overall engagement with community, we saw that number significantly drop between May and September to one shot being fired, which I call victory,” Mylett told the Jason Rantz Show on KTTH at the time.

Implications of the exit

There are significant implications to his potential departure. Seattle Chief Carmen Best was just forced out by a hostile, anti-police Seattle City Council. Seattle Mayor Jenny Durkan has paused an official search for a permanent replacement as she openly wondered who would want to lead the Seattle Police Department in the current environment.

Will Bellevue have a hard time attracting a candidate to fill the role in a region that is currently perceived as hostile towards police? Councilwoman Robertson doesn’t think they’ll have issues.

“His departure would be a loss as he has set a high bar for Bellevue Chief of Police. However, Bellevue is a well-run city that supports our police officers and that reputation will help us in recruiting the finest candidates in searching for the next Police Chief of Bellevue,” Councilmember Robertson explains.