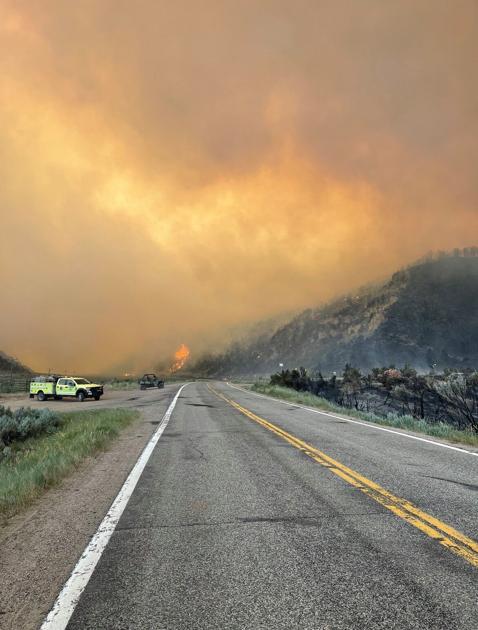 Authorities are calling recent rainfall “a blessing” as it is helping slow a wildfire in western Colorado.

The Oil Springs fire, south of Rangely, remains at 12,707 acres as of 8 a.m. Saturday, according to Rio Blanco County Sheriff’s Office. The fire was reportedly sparked by lighting June 18.

Firefighters reached 8% containment and were able to reopen CO-139 Saturday morning thanks to a reported average of 0.2”-0.4” of rain in the past 24 hours.

County roads 116 and 113 remain closed as crews continue to work in those areas.

Although the CO-139 is reopened, firefighters continue to actively use the highway to access the fire. Authorities ask motorists to use caution and slower speeds when driving in the area.

Despite muddy conditions from recent rainfall, crews were able to access the fire safely. “Mop up” work will continue Saturday along CO-139 and at the fire edge past West Creek drainage, as well as along County Road 116. Work in securing containment lines will also continue Saturday.

Protecting the Dragon Trail Compressor Site is a priority, the Sheriff’s Office said Saturday. Firefighters plan to work on the northwestern flank of the fire from County Road 116 towards Texas Mountain.

A helicopter is planned to shuttle supplies and crews in order to build a containment line on the southwest portion of the fire, which is in Oil Springs Wilderness Study Area and inaccessible by roads.

The spot fire between East Douglas Creek and Willow Creek is contained but will continue to be monitored.

As of June 25, Stage 2 Fire Restrictions are in place for Rio Blanco County, pursuant to Resolution 2019-06:

2. Smoking, except within an enclosed vehicle, trailer, building or tent.

4. Operating a chainsaw without an approved spark arrestor, and without a chemical pressurized fire extinguisher and a round-point shovel with an overall length of at least 35 inches. The extinguisher will be with the equipment operator. The shovel may be kept with fueling supplies but readily available for use.

5. Welding, or operating an acetylene or other torch with open flame (except with a current permit, contract or letter of authorization).

6. Operating or using any internal combustion engine without a spark arresting device properly installed, maintained and in effective working order meeting either:

a. Department of Agriculture, Forest Service Standard 5100-1a;

b. or Appropriate Society of Automotive Engineers (SAE) recommended practice J335 (b) and J350 (a).

A. Persons with a written permit that specifically authorizes the otherwise prohibited act.

B. Any Federal, State, or local officer or member of an organized rescue or firefighting force in the performance of an official duty.