Rafting the Colorado River is a perfect family getaway 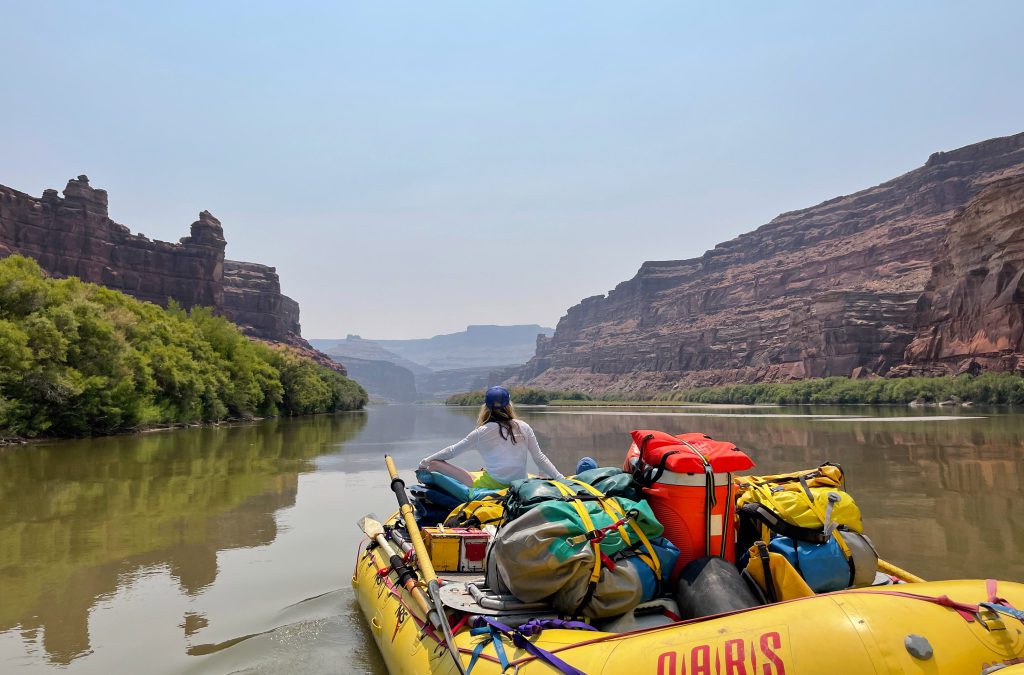 The sign on the bank was just as I remembered it from my last time here, when I floated by this spot on the Colorado River 24 years ago. It reads: “DANGER: Cataract Canyon hazardous rapids 2 mi, permit required from superintendent Canyonlands National Park for boating below Spanish Bottom.”

To reach this point in 1997, my friend Sean Gaughan and I paddled a canoe for seven days down the Green River, which joins the Colorado just upstream from here.

This time, however, I’d returned with my 13-year-old daughter, Shanti, on a four-day rafting trip out of Moab with OARS, a venerated outfitter that runs trips on most major rivers in the West (oars.com).

Of course, when I last visited, the Great Drought was just beginning; water levels in rivers and reservoirs were still high and I remember a strong, quick current pushing our canoe for those 120 miles.

But since 2000, Lake Powell, into which the Colorado River spills via Cataract Canyon, has decreased by 140 vertical feet — a result of steadily decreasing snowpack in the mountains. One of our guides said it was the lowest he’d seen it in a decade and that it dropped several feet each time he returned.

The walls of Cataract Canyon rise hundreds of feet above the Colorado River as boaters make their way through a calm section of water.

At these levels, we didn’t get to experience the boat-crunching Class V gnarliness for which Cataract is famed at high flows, but we had a blast as we bounced down the canyon, splashing through several series of wave trains, small rapids, and technical turns in a section called Big Drops. On flatter, slower sections, we tied our rafts together and stuck a motor behind us in order to make our miles.

Shanti and I weren’t there for the rapids or thrills though; rather, I’d wanted to share with her the enormity of the canyon experience and the rhythm of the river, which I’ve remembered so fondly from my first time here. You float, find a place to camp, cook some food, then sleep under the stars. And then you do it all over again. And again.

On this trip, our campsites were all atop soft, sandy beach bars and meals were grand affairs of salmon, steaks and charcuterie.

On the second night, it rained and my tent collapsed; on night three, a sandstorm tried to blow our camp apart, stinging our eyes and tearing at our tents. But afterward, it left a clear sky, and most of us slept on the sand to watch for shooting stars.

During the final miles, as we motored into Lake Powell, the canyon walls were as tall and awesome as anything I’ve ever seen. And then we passed under the Hite Crossing Bridge, pulled up to the steep boat ramp, and boarded a van for the 10-minute drive to the airstrip. There, two small aircraft landed to shuttle our group back to Moab.

My thoughts mixed with the excitement of lift-off and then there was Cataract Canyon below.

Shanti and Joshua Berman are all smiles during a rafting trip down the Colorado River through Cataract Canyon in July 2021. Berman wanted to share the wonders of Cataract Canyon and the rhythm of a multiday rafting trip with his daughter, recalling a trip he took decades before with a friend.

The wing of our plane tipped, the Canyonlands stretched forever, and I thought, it’s the same for the rocks — these cliffs and canyons and mountains that are as solid as anything, yet also shifting and crumbling before us, sometimes even blasting sand into our eyes.

Sean and I dropped our canoe into the Green River several lifetimes ago. This past week, my daughter and I got in a boat and we continued downstream from where I’d left off. But we’re on a completely different journey, and it’s far from over.