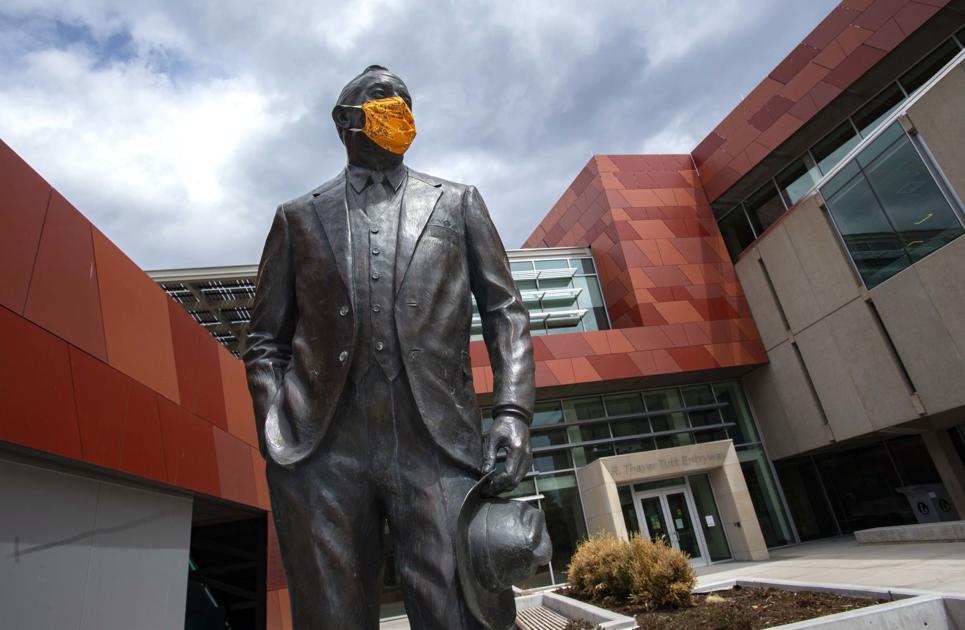 Being stuck for two weeks in a small dorm room with nowhere to go and not much to do isn’t how Ben Hayes-Lemmon pictured his freshman year at Colorado College would begin.

“It’s just a weird way to start off college,” said Hayes-Lemmon, one of 150 CC students quarantined in Loomis Hall until Aug. 30.

Shortly after new students began moving into their dorms for a week of orientation, one student tested positive for COVID-19, the disease caused by the novel coronavirus.

That put into motion a plan college leaders created months ago in preparing for in-person instruction amid a pandemic, said Brian Young, the school’s vice president for information technology and chief technology officer.

The plan includes working with state and local health departments to assess the situation, tracing who the infected person had contact with, figuring out how to minimize spreading the virus and addressing logistics.

The latter involves making sure quarantined students receive deliveries of three meals a day, snacks, packages and activity kits, along with regular check-ins from staff regarding students’ mental and physical health. Virtual meetings with staff, setting up online learning and communicating with everyone affected, including parents, also have been part of the work.

However, “Asking 18- to 20-year-olds to change their entire social network and behavior is challenging.”

Students are moving into campus housing on a staggered schedule this semester and are being tested for the virus upon arriving, Young said. But it takes two to three days to get the results.

In the meantime, students are being asked to do “enhanced social distancing,” meaning not congregating with other students except for their roommates, wearing masks indoors and outdoors and frequently washing their hands.

Young said one student didn’t follow that protocol and after receiving a positive COVID-19 result, school officials determined he had been in contact with many of the dorm’s new freshmen and resident assistants, who are older students.

Because of the large number of students who were potentially exposed to the virus, the health department advised that everyone living in the dorm should remain in their rooms for 14 days to see if anyone else gets sick and not spread the disease.

It was “the most appropriate course of action, based on identifying widespread exposure,” said El Paso County Public Health spokeswoman Michelle Hewitt.

No one else on campus has become ill from the virus at this point, Young said. The student who contracted the infection is in isolation, he said, and doing all right.

Ten students returned home to quarantine there, Young said, but most are sticking it out and trying to make the best of the situation.

Parts of it are awful, students say.

The first few days were confusing and chaotic, said one student who asked not to be identified. Students were told they might not be able to use the bathroom for a while, he said, and because the dorm has no air conditioning, rooms reach temperatures in the 90s in the daytime.

Much like the widescale pandemic restrictions for the general population, the rules have been changing. The first day, students were not allowed outside at all. The second day they could go outside for 15 minutes but not be around anyone else.

Now, student rotate going outside to an open field in one-hour increments, where they can exercise under staff supervision, such as on yoga mats.

Students are being allowed to exercise outside, the public health department’s Hewitt said, but “are currently limited to spending time outside with their roommates.”

Cones are set 12 feet apart to keep students separated, said Hayes-Lemmon, who signed up to compete in track and field events at school.

“I’m a little upset we’re not able to go outside much and do anything,” he said. “It’s super weird.”

Before the quarantine, the new students were meeting people, moving around campus, doing outdoor activities and eating meals in the dining hall, Hayes-Lemmon said.

He and his roommate, whom he’s known for about a week, have been passing the time by playing video games on a television he brought, eating and working out on a yoga mat that came in one of the activities’ kits left outside their door.

“It’s been kind of boring, honestly,” said Hayes-Lemmon, who graduated from Coronado High School in May, after finishing his senior year of high school online like other local students impacted by the pandemic.

Classes start Tuesday, with about 700 students on campus and others doing remote learning, including the quarantined students.

“Everyone’s just waiting for next Sunday, so they can be free,” Young said.