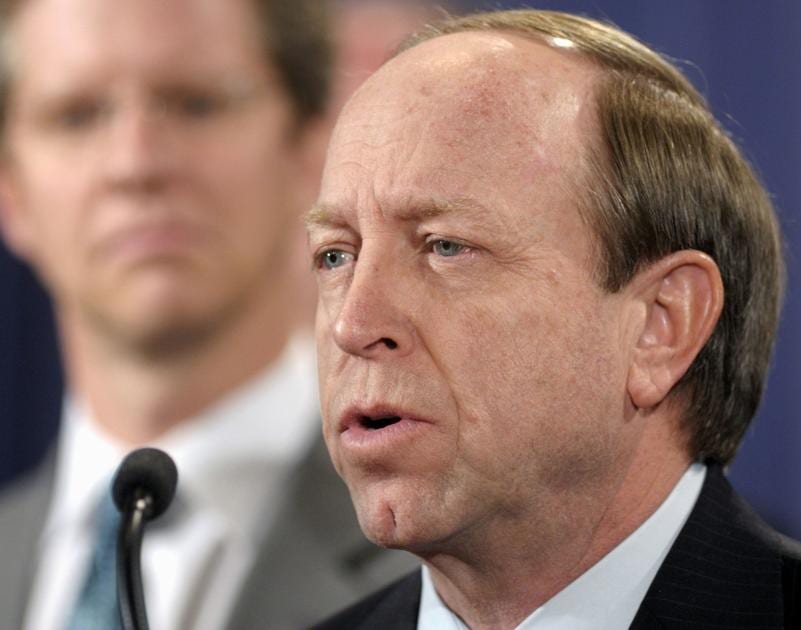 As Colorado Springs eases into normalcy following strict orders to slow the spread of the coronavirus, Colorado Springs Mayor John Suthers outlined on Thursday his possibly advocating for allowing greater business activity and warned of millions in additional cuts to the city budget.

Thus far, Suthers said he has been happy with Gov. Jared Polis’ decisions on reopening the economy, but may take on a more active role if the city’s numbers of COVID-19 cases continue to stay low through May 15 and the state allows dine-in restaurant services and other business activity to resume.

The following Q&A with Suthers about the economic fallout from the coronavirus and his views on state leadership was edited for length and clarity.

Do you expect to take on a more prominent role in managing the virus since there is opportunity to file for waivers and do more work on the local level or do you expect to keep following the governor’s guidelines?

First of all, as a mayor, the only thing I could do is be more restrictive than the governor, OK? So I could say: ‘No we didn’t want to open on May 1, I am going to issue an order saying we are going to open on May 8, like Denver did or Arapahoe or Jefferson County.’

I am disinclined to be more restrictive than the state order. In fact, I feel like the state has proceeded at a very appropriate pace thus far. To seek a waiver, I mean I think I could be an advocate for it, but as you know the process is the county commissioners have to vote, majority vote, to seek it after getting a signoff from the health department and the hospitals, OK. And so I am not directly (involved.) They don’t have to get my signoff and I can’t instigate it myself.

I will tell you what I directly told the governor in a conversation on Tuesday. I said I am very happy with the pace that things have proceeded thus far, the numbers in El Paso County. I went over them with him directly. … As of (Wednesday), we have 5.9% of the positive cases, despite being 12.5% of the population. We have 8.4% of the deaths and as of (Wednesday) we had something like 2.5% of the hospitalizations …

I said if these numbers continue, I am hoping we will be more well-poised to move to another phase that would have limited restaurant openings, dealing with issues regarding churches and things like that … He said he wanted to see two weeks of data after the retail opening under state order which was the 4th. So he is going to see what things look like on the 15th and then start making decisions. And I said if the numbers look good, I would encourage you to move on to a next phase with limited restaurant capacity as early as … the 22nd or so. If as a result of statewide numbers, you extend it much beyond that period of time and our numbers continue to look as favorable as they are, then I will join in the chorus of folks that might advocate for a waiver.

But so far I feel very good about the pace that the local health department has been going at. I think they have been very attentive. They are data driven. The governor’s data driven. So as of right now I think we are on an appropriate pace. And we’ll see as we analyze the two week numbers at the same time the governor is and see what decisions he makes whether to move on to a next phase. And if he decides not to and our numbers justify it, then I may well join the advocates moving on to a next phase through a waiver.

The health department has to lead the charge with waivers … Do you feel like that’s appropriate?

In other words do I agree with your newspaper’s editorial this (Thursday) morning? Not entirely. I just think, yes, public officials have a lot to say, but I think ignoring health experts and health experts’ advice is not appropriate. … The way it’s been set up by the governor’s order. I think it’s lawful. States can issue health orders in times of health crisis and I don’t think anything they have done thus far has been inappropriate.

Some other cities have requirements around wearing face masks. Is that something that you are considering?

I believe March’s sales tax numbers are back?

They are coming out officially Tuesday. … What’s coming out next week is what was collected in March and paid to the city in April. … I have seen a very preliminary estimate and it’s not pretty. But keep in mind it could be a lot worse because about 10 or 11 days of March were normal. So sales taxes will be down double digit. Lodging and rental tax will be off the charts down. That’s a disastrous situation because so many hotels have closed. … I think you’ll see that online purchases in March skyrocket over last March’s purchases and that’s not surprising. But overall we’ll be down substantially, we expect that we’ll be down significantly more in April because in that case the whole month was the subject of a shut down.

What are some particular steps in the future that you might take to support businesses as we look to reopen? Is there a role that you see the city could play in helping that effort?

In the coronavirus relief funds, local governments can actually use some of those to help businesses. … Because we were not 500,000 (in population) we did not get a direct allocation. We got an indirect allocation from the county for $37.5 million. … It looks like that will be taken up with COVID-related things and we will not have spare change sitting around to distribute to businesses. The county obviously is going to have about $80 million and I think they may be thinking about providing additional relief to local businesses and I think that would be appropriate.

We have been very active, Bob Cope (economic development officer for the city) has been very active in helping organize some of the avenues of business relief, aside from all the money coming down from the feds through the Paycheck Protection Program. No. 1 there is the (Survive & Thrive Fund), I think it has collected now over $2 million and has made a number of loans (to businesses). There is the Downtown Development Authority. They put in $400,000 themselves and I think they got $250,000 from Pinnacol (Assurance), so that’s $650,000 (in business grants). And then there’s Pikes Peak Community Foundation Fund, that I think is in excess of $1 million. … They have made allocations to nonprofits, like Care and Share (and) Rescue Mission.

I am curious about the $37 million and if you have already slated it for particular costs?

There was a huge development on Tuesday in that regard.

The initial guidance that we got from Treasury … (said) we can spend it on any necessary expenditures incurred due to the public health emergency and so, in that regard, we can spend it on (personal protective equipment) for police and fire, all the signage that we have done in the parks. We have some parks employees doing nothing but policing parks. … We’ve done a run on plexiglass and we’re basically shielding all interfaces between our employees and the public throughout the entire city. And then Congress dictated a very liberal family leave act policy and to the extent that costs us more than our current family leave act, that’s reimbursable to us by this fund.

But what happened on Tuesday was very, very significant because prior we could not pay for anything that was accounted for in the budget most recently approved, so any kind of payroll or anything like that — the mayor’s salary is in the budget, even if I was spending 90% on my time on COVID that wasn’t reimbursable. But on Tuesday guidance came down from Treasury that said public safety payroll, this would be police, fire and to lesser extent Office of Emergency Management, it will be presumed that because of the crisis they are doing something significantly different and you can use coronavirus related relief fund for payroll for public safety officers.

That’s huge, because for the rest the year our police and fire payroll is well in excess of $80 million. It’s $100 million or more for the year. We are now able to apply this money to help that and of course that helps the rest of the budget too … The fact we are able to apply it directly to police and fire payroll will cause us to have some relief to the general fund. Then of course the other thing we are waiting on is everybody in Washington is talking about a Phase 4 (of the Coronavirus Aid, Relief and Economic Security Act), which would have what they call revenue stabilization funds for states and cities and if that comes down that could be applied to make (up) for taxpayer shortages which we weren’t able to except in the manner I just described for public safety payroll.

What kind of future budget cuts are you preparing for or is that in flux?

It’s very much in flux. … We cut $20.8 million, that’s all done and that’s getting a little bigger because of the hiring freeze and people are leaving. My guess is we have 120 employees less than we had a year ago because of a hiring freeze. We now are prepared for a phase two, which I think is roughly about $18 million that would involve some across-the-board pay cuts. It would involve dipping into reserves and things like that. And what we are waiting on is the following: We want to see April’s numbers, so this decision would be made first week in June. We want to see April’s numbers and then we also want to know what if anything Congress is doing about a potential phase four. With all that information in mind, we’ll pull the trigger as to what that next cut phase looks like. We’ve penciled it out as at least $18 million.

Do you know where those cuts would be coming from? What areas?

Part of it would not be a cut, it would be a transfer over from reserves. I think we would be asking another $2.5 million from the departments. … They have already cut substantially to get to that $20.8 million. And then most of it would be coming from across-the-board pay cuts. To get to that number, it’s like 6% or something like that. … It is very much in flux, we are going to have to see what Congress does. We are going to have to see what April numbers look like, but we have to model and we have to plan. We gotta do whatever we have to do to balance the budget, and we’re going to do it.