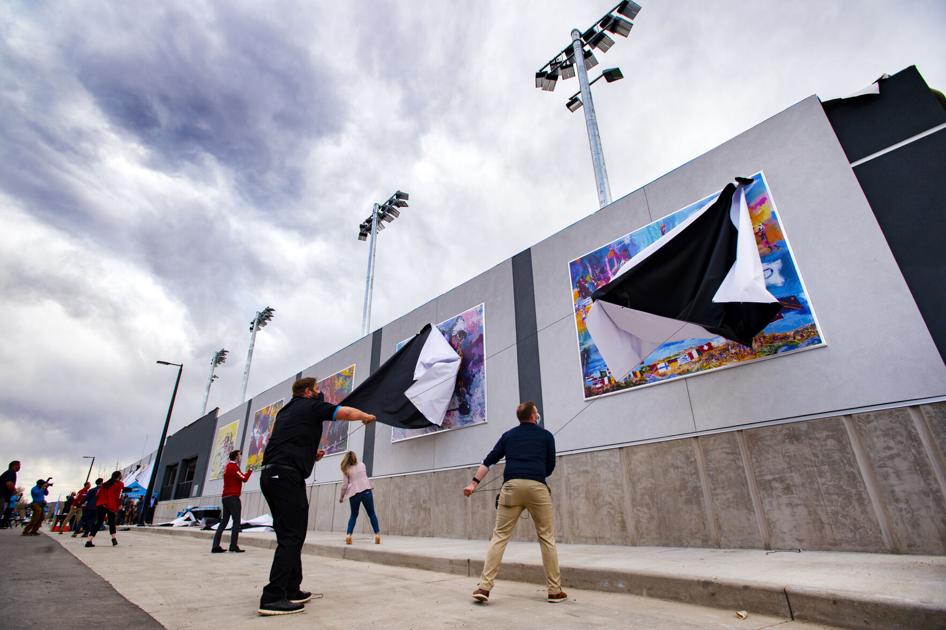 Take a look at some of the art installations at the entrance to Weidner Field. (Video by Terry Terrones)

Public art is a boon to a neighborhood and a city.

The works are a gift to the city from Springs native and Wasson High School graduate Dean Weidner, founder of Weidner Apartment Homes, which also holds naming rights to the stadium and is a part-owner of the Switchbacks and the venue.

“The stadium has large walls that could be terrible or a magnet for graffiti,” said Greg Cerbana, Weidner’s vice president of public relations. “As a formerly blighted area of the city it was important for us to add to the culture there, not only commercial activity, but open spaces the public can come and enjoy.”

According to the nonprofit Americans for the Arts, public art is essential when a city wants to make economic progress. Data proves active and dynamic cultural scenes are more attractive to people and businesses. And strong public art also can help a city stand out, giving its community a stronger sense of place and identity.

“Public art can create civic icons,” reported the organization on its website, “but it also can transform our playgrounds, train stations, traffic circles, hospitals, water treatment facilities and airports into more vibrant expressions of human imagination.”

Being as the Springs is Olympic City, USA, Weidner Apartment Homes saw an opportunity to partner with the LeRoy Neiman Foundation. Neiman was the official artist for five Olympic Games, where he painted top athletes competing in their events. Among the stadium’s murals are homages to skiing, tennis, the ’84 Olympics, cycling, running, swimming, track and, of course, soccer.

“What better way to use the side of a stadium than to celebrate sports and its different flavors?” Cerbana said. “It’s a really good cross section of images that represent Neiman’s work.”

Towering over the murals is the 35-foot tall “Epicenter.” It weighs more than 164,000 pounds, stretches more than 65 feet in diameter and has multicolor LED lights inset into its rings that will flash at strategic moments.

Weidner asked the sculpture’s development team to be forward-thinking and consider the anticipated growth of the Springs, along with the city’s focus on U.S. Space Command, the military and the Olympics. The public art piece was designed and manufactured locally at Springs Fabrication, the company responsible for “Continuum,” the Julie Penrose fountain in America the Beautiful Park.

“The word he used was aspirational,” Cerbana said. “What he saw on the horizon for Colorado Springs was unlimited potential. He wanted people to see what the Springs has to offer.”

Stepping stones on the sidewalk out front were designed to give people different heights to take photos of themselves, and a gently sloping sidewalk that mimics a switchback, which you might find on a hiking trail, will assist those with disabilities when they enter the stadium.

“We believe this will be one of the premier places in Colorado Springs where visitors will want to come and look at and engage,” Cerbana said.