Proposition EE explained: How much more cigarettes, nicotine products would cost in Colorado 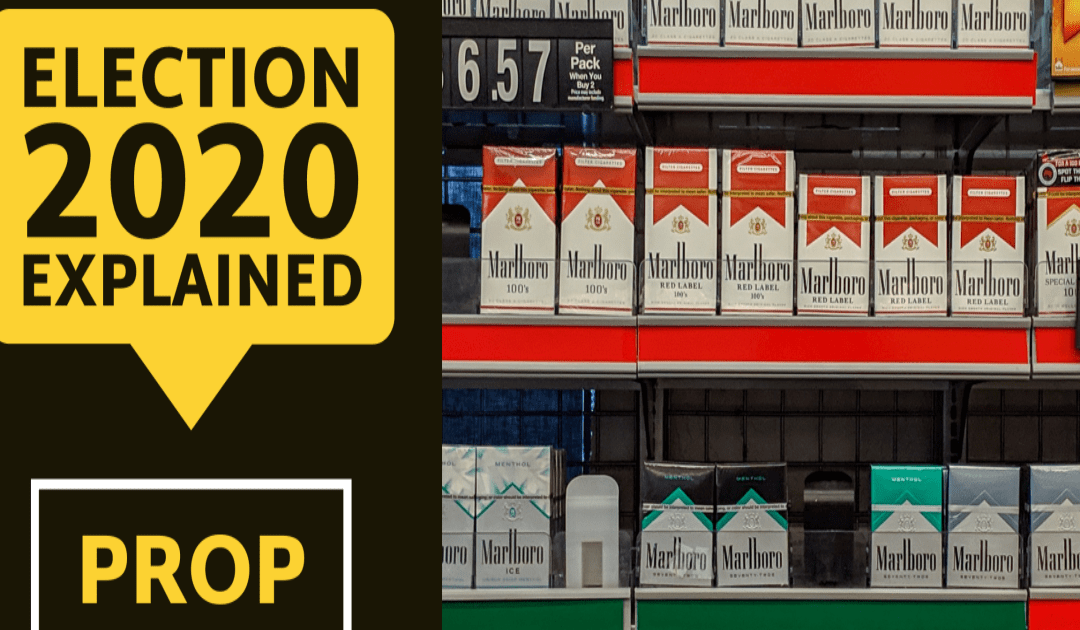 Cigarettes and tobacco products are taxed in Colorado. Vaping devices and vaping fuel are not.

A question on the November ballot — Proposition EE — would change that system, increasing the price of cigarettes and all other nicotine and tobacco products gradually over the next seven years.

The Colorado legislature passed legislation in the 11th hour of the the recent lawmaking term to place the question on the ballot. The bill was negotiated between Democratic lawmakers, Gov. Jared Polis’ office, health advocates and the Altria Group, one of the world’s largest tobacco companies. Altria is the maker of Marlboro cigarettes and a major investor in the vaping brand Juul.

Proponents see Proposition EE as a way to drive down tobacco use in Colorado — including teen vaping. And on top of that, they want the money raised through the tax to go toward funding preschool slots across the state. Opponents say the tax increase is regressive and will hurt smokers and tobacco users who are minorities and have lower incomes.

If passed, it would be the first tobacco tax increase in Colorado since 2004, when voters approved an additional 3.2 cents in taxes per cigarette. Today, there is an 84-cent tax on each pack of cigarettes and a 40% tax on the manufacturer’s list price for other tobacco products, like chewing tobacco, cigars and snuff.

Here is how cigarette taxes will be increased if Proposition EE is approved:

Here is how taxes on tobacco products — like chewing tobacco, cigars and snuff — would be increased:

There’s also a minimum-tax for moist snuff products that would be imposed by the ballot question. It’s $1.48 per 1.2-ounce container starting in January, increasing to $2.26 by July 1 2027.

Finally, here is how taxes on all other nicotine products, including vaping devices, vaping fuel and e-cigarettes, would be enacted:

The ballot question also specifies taxes for modified-risk tobacco products, which are products that the U.S. Food and Drug Administration says can be advertised as having lower risks for causing certain health issues compared to smoking cigarettes. They include Marlboro Heatsticks and General Wintergreen White Portion snus. (Here’s a list of those products.)

Here is how taxes on modified-risk tobacco products would be enacted:

How much tax revenue would be generated and where would it go?

The assumption is that as the taxation rates go up, so will the state’s revenue.

Take a look at the chart below for more detailed information:

Proposition EE is often pitched by proponents as a way to fund preschool slots across Colorado, but the initiative wouldn’t start really sending money to that initiative until the 2023-24 fiscal year. After then, most of the money would be allocated to preschool programs.

The idea is to collect enough money to provide at least 10 hours per week of free preschool for every Colorado child in the year before entering kindergarten.

In the first three years, the revenue from the new and increased taxes would be split between the state’s K-12 education fund, rural schools and housing assistance. Lawmakers did that to help Colorado weather the economic impacts of COVID-19, which decimated the state budget.

What do proponents say?

Backers of Proposition EE, including Polis and Democrats in the state legislature, say increasing the cost of cigarettes and nicotine products is a way to cut down on tobacco use and pave a future for expanded early childhood education in Colorado.

They point to studies showing that when the price of tobacco products goes up, use goes down. The hope is that the ballot question will help drive down Colorado’s high youth vaping rates, as well.

They also highlight research showing that children fare better when they have access to education when they are very young.  “We know that early childhood education is essential for helping kids realize their potential,” Polis said at a rally for the ballot initiative. Polis promised during his 2018 gubernatorial campaign to create a universal preschool program in Colorado.

Opponents argue by the ballot question’s supporters’ own reasoning, eventually the number of tobacco users will go down if Proposition EE passes and the state will have to find another source of funding for preschool.

Proponents of Proposition EE have formed the committee A Brighter, Healthier Future for Colorado Kids to help ensure the ballot question’s passage. They’ve raised more than $2.6 million over the past two years.

The 10 largest donors are:

What do opponents argue?

Two main groups are generally opposed to Proposition EE: conservatives concerned about raising taxes and companies that make and sell cigarettes and other nicotine products.

“As our economy attempts to recover from COVID-19, now is not the time to raise taxes on the very people who can least afford it,” former Colorado Senate President Kevin Grantham, a Cañon City Republican, wrote in an opinion piece in Colorado Politics.

Opponents often argue that raising taxes on tobacco products disproportionately impacts minorities and people with lower incomes who are addicted to cigarettes or other products containing nicotine. Raising tobacco taxes simply forces them to pay more.

Tobacco and nicotine interests take issue with the question for a number of reasons.

Amanda Wheeler, who leads the Rocky Mountain Smoke Free Alliance, which represents vape shops, said small businesses could be forced to close if the taxes are imposed.

She also argues that since vaping products can be used by people hoping to quit smoking cigarettes, they shouldn’t be taxed at such a high rate. (The Centers for Disease Control and Prevention says “there is presently inadequate evidence to conclude that e-cigarettes, in general, increase smoking cessation.”)

“We’re encouraging them to vote ‘no,’” Wheeler said of vape shop customers. “We’re making sure that our customers are registered to vote.”

The other tobacco interest that is working against Proposition EE is Liggett Vector Brands LLC, which sells discount cigarettes. The company argues that the minimum-price provision in the ballot question will hand market share in Colorado over to Altria because it makes more expensive cigarettes. Altria was central to the statehouse negotiations that led to the ballot question.

Liggett Vector Brands LLC has given $1 million to “A Bad Deal For Colorado,” which opposes the ballot question.

Haven’t we seen this on the ballot before?

In 2017, Colorado voters soundly rejected the last effort in the state to raise cigarette taxes. The proposal was to raise the taxes on a pack of cigarettes to $1.75 from 84 cents. It failed by 6 percentage points.

Altria that year spent more than $16 million to defeat the ballot question. This year, records show they have not spent any money on the race.

The big difference: This time around, they helped negotiate the bill that led to the question on the November ballot.