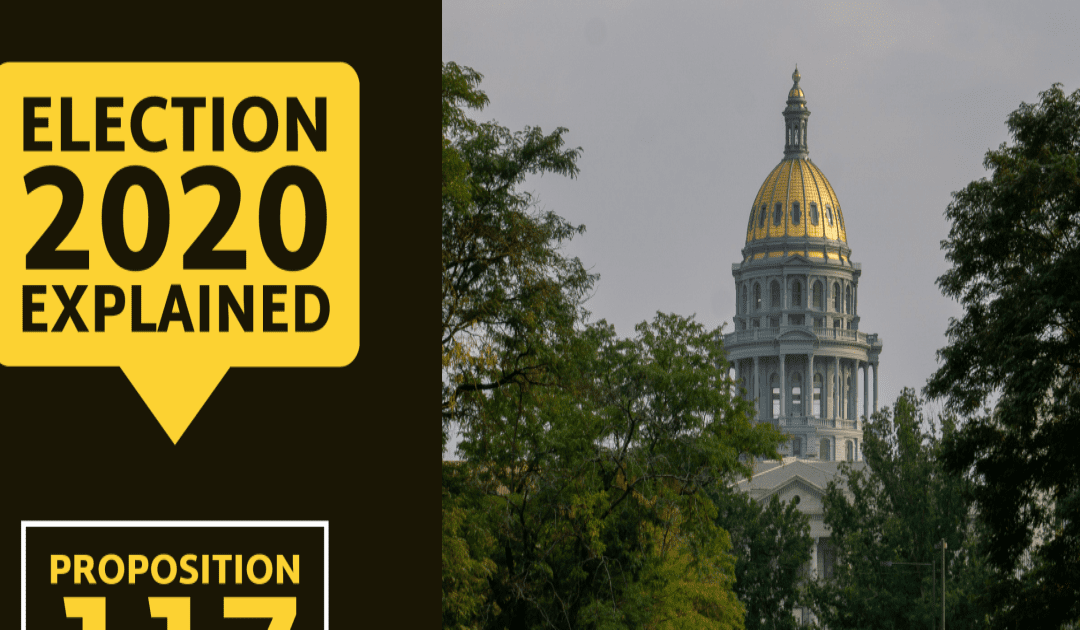 It’s the rare point of bipartisan agreement in Colorado politics where public spending is concerned: Since the Taxpayer’s Bill of Rights took effect in 1992, state lawmakers have increasingly turned to fees to fund government operations.

But how you feel about that development, depends on your politics. To the left, it’s an unfortunate side effect of the state’s strict restrictions on taxation. To the right, it’s a sign that TABOR, the state’s landmark constitutional amendment governing public spending, didn’t go far enough to restrain government growth.

This November, that debate goes to voters, as it so often does in Colorado, in the form of a complicated ballot measure that demands an up-or-down vote on the future of the state’s fiscal policy.

Proposition 117, supported by conservative anti-tax groups, would require voter approval for the creation of certain fee-funded state government programs known as “enterprises.” Traditionally, these are public entities, like water utilities, parks or toll roads, that operate like a business because they are funded primarily by user fees rather than taxes.

Nonetheless, if the proposition passes, it would represent a major expansion of voter control over Colorado fiscal policy that would reshape future budget fights and further limit the ability of state lawmakers to create government programs.

A nonpartisan legislative analysis found that had Proposition 117 been in effect previously, it would have triggered elections on seven of the 16 government-run state enterprises Colorado had in place in 2019, affecting as much as $7.6 billion in annual public spending by universities, state parks and prisons. It also would have required voter approval for a reinsurance program pushed by Gov. Jared Polis that imposed new fees on health insurance plans and hospitals.

Here’s an overview of what you should know about Proposition 117 and enterprise funds.

What are state enterprises, and why do they matter in Colorado?

State and local governments all over the country rely on so-called enterprise funds to pay for essential services. These are effectively government-run businesses that mostly operate with the fees they charge to users. In Colorado, state and local taxes can’t make up any more than 10% of an enterprise fund’s revenue.

Common examples include public water utilities, municipal airports and the entities that operate toll roads. But enterprises take on a special significance in Colorado because of the state’s unique restraints on taxation.

TABOR, added to the state constitution in 1992, does two key things that have contributed to the proliferation of enterprises.

One, TABOR requires voter approval for all new taxes — but not fees, which are legally distinct from taxes in that they can’t be used for general government services. Instead, courts have said they have to fund something that’s reasonably connected to the fee itself. For instance, toll fees can pay for road maintenance, and park fees can pay for parks upkeep, but neither could be used to pay for health care or courts. And because voters have rejected most new statewide taxes in the TABOR era, lawmakers tend to view fees as a more politically feasible way to boost spending on public services. Not all government fees are tied to enterprise funds, but that’s the purpose for many of them.

Two, TABOR prevents general government spending from increasing faster than a revenue cap, which limits the growth of the state budget to the rate of population growth plus inflation. Historically, this limit has not allowed the state to keep up with the growth in expenses such as Medicaid caseloads or schools. So to pay for new initiatives without cutting funding to other areas of the budget or asking for new taxes, lawmakers effectively have to set up programs as an enterprise, which TABOR explicitly exempts from its spending limit.

State lawmakers also have used this mechanism to prevent existing programs from crowding out other services. College tuition and student fees, for instance, were reclassified in 2004 and now make up the state’s largest enterprise, generating $5.1 billion in the 2019 fiscal year. More recently, lawmakers converted a hospital-bed fee that helps reimburse hospitals for uncompensated care to an enterprise fund; it now generates around $1 billion a year.

The case in favor of Proposition 117

To supporters, Proposition 117 is a natural extension of the voter protections provided by TABOR — protections that they argue lawmakers have undermined by leaning so heavily on enterprises.

There’s no doubt that the growth of enterprising has been staggering. Just after TABOR took effect in the 1993-94 fiscal year, enterprise funds generated $742 million, which was just a fraction of the state’s total budget. In 2017-18, according to an analysis by Colorado Legislative Council, they generated nearly $18 billion. But not all of the total comes from fees. In the 2018-19 fiscal year, according to a separate legislative analysis, fee revenue collected by state enterprises only made up around 20% of the state’s roughly $29 billion budget.

Michael Fields, the executive director of Colorado Rising State Action, a conservative advocacy group, said during a recent debate that enterprise funds were “used for good things in the beginning,” such as college tuition, the state lottery and state parks.

“What we’re concerned about is the things that it’s moving towards,” he said in the forum moderated by PBS12 and The Colorado Sun. “If you’re going to create a new program, you need buy-in from the people.”

One enterprise that Fields suggests goes too far and should have received voter approval is the state’s new reinsurance program, which lawmakers decided to fund through health insurance fees after the coronavirus pummeled the state’s coffers. Legislative analysts expect it to generate $94 million in the 2021-22 fiscal year and more than $100 million annually after that.

Colorado is more reliant on government fees than the average state, according to an analysis by Pew Charitable Trusts, ranking 9th nationally in the percent of its budget that comes from service charges. Still, comparing fees and taxes across states is tricky. For one thing, Pew’s analysis excludes insurance funds, like Colorado’s unemployment trust fund, which is among the state’s largest enterprises. For another, Colorado’s “hospital provider fee” is considered a “bed tax” in many states, illustrating the degree to which TABOR has shaped even the words lawmakers use in creating policy.

“The legislature has been going around our Taxpayer’s Bill of Rights,” Fields said. “If they label something a fee, they don’t have to go to voters for approval.”

The case against Proposition 117

Opponents view Proposition 117 as an unnecessary restraint that will make it that much harder for lawmakers to fund public services. And they balk at the notion that lawmakers have turned to fees to circumvent TABOR. The constitutional provision explicitly allows lawmakers to create fee-funded enterprises without the same restraints it imposes on taxes.

Scott Wasserman, president of the Bell Policy Center, a progressive think tank, blames TABOR’s restrictions for the chronic underfunding of K-12 education, higher education and transportation — all in a state where, before the pandemic, the economy had consistently been rated among the nation’s strongest. He fears that placing new restrictions on enterprises will make matters worse.

And, he says, it’s simply not good government to continually put esoteric fiscal policy questions — like the $34 million petroleum storage tank enterprise, which charges fees to fund environmental clean-ups — on the ballot.

“Why do we want to make these very specific, technical, user-based issues politicized fights, where big money can come in and really distort the issue?” Wasserman said during the debate.

“This is why we send people to the state Capitol who are trying to operate government on our behalf,” he added.

State Sen. Dominick Moreno, the vice chairman of the Joint Budget Committee, also urged voters to reject it, saying that Proposition 117 would limit the state’s ability to respond to the ongoing financial crisis created by the coronavirus.

“Our teachers, doctors and nurses can’t afford more cuts and cannot be shut out of this recovery,” Moreno, a Commerce City Democrat, said in a statement. Proposition 117 and the Proposition 116 measure to cut income taxes “would stall our recovery and permanently harm our ability to provide critical state services.”

Notably, unlike TABOR and some of Colorado’s other constitutional fiscal constraints, Proposition 117 is a statutory change, meaning that lawmakers could override it by passing legislation. But there would be political risks in doing so if voters approved it on the ballot.