Proposition 116 explained: Colorado must decide whether an income tax cut is worth a hit to state budget 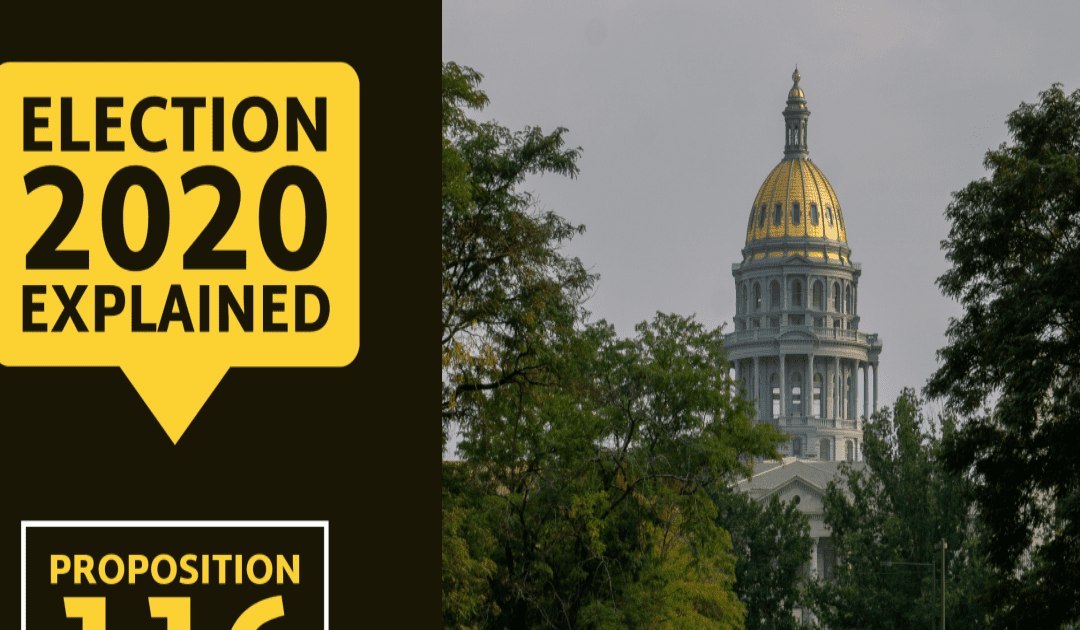 A measure on the 2020 ballot in Colorado proposes a permanent cut to the state’s income tax rate that would give the average taxpayer a $37 break annually.

The limited-government conservatives and Republican lawmakers backing Proposition 116 say the tax relief comes at a crucial moment amid the economic downturn caused by the coronavirus. The measure would reduce the current 4.63% income tax rate on individuals and corporations to 4.55%.

“The simple truth is, Proposition 116 is a mild but much-needed tax cut for all taxpayers at a time when Coloradans could use the boost wherever they can get it,” said Sen. Jerry Sonnenberg, a Republican from Sterling and author of the measure.

But the measure’s opponents say the timing is a major reason to forgo the modest tax break — because it would reduce state tax revenues by more than $150 million at the same time Colorado lawmakers are cutting billions from the state budget.

“We need more flexibility and creativity for our state budget, not something that will constrain the state budget even further — our students deserve better,” said Amie Baca-Oehlert, the president of the state’s teachers union, expressing opposition to Proposition 116 and Proposition 117 limiting government fees.

The competing arguments about the benefits for individuals and corporations and the costs at the collective level define the debate on Proposition 116 ahead of the November election.

Here’s what you need to know about Proposition 116 and Colorado’s tax system.

How income taxes work in Colorado and how they are spent

Colorado is one of 43 states that levy individual income taxes and one of nine with a flat tax, according to the Tax Foundation. The state taxes 4.63% of federal taxable income, which ranks among the lowest income tax rates in the nation.

When it comes to overall individual local and state tax burden, the foundation’s analysis finds Colorado ranks 15th in the nation. The study found that businesses fare much better with a one of the nation’s lower tax burdens.

Income tax accounts for the bulk of the discretionary spending in the state budget and goes into what’s known as the general fund. In fiscal year 2018-19 the state collected $9.2 billion, according to a legislative analysis.

Colorado lawmakers apportion the general fund spending each year in the state budget process with health care and other safety net programs and education consuming the bulk of discretionary spending. For the current 2020-21 fiscal year, the two areas consumed 74% of the general fund budget.

What an income tax cut would mean for taxpayers

For individuals and corporations, the amount of the break from the 1.7% reduction in the state’s income tax rate depends on income levels.

On average, individuals would pay $37 less in income taxes, according to legislative analysts. The savings for someone with $25,000 in taxable income would be about $20 while those with taxable income of $1 million would save $800.

What lower income taxes would mean for Colorado

The reduction in the income tax rate would reduce reduce revenue into the general fund by 1.2%. That amounts to $154 million less for state lawmakers to spend in its first full year, official estimates show. The annual financial impact of a lower income tax rate would increase as the state’s economy and workforce grows.

The opponents say that’s no small sum, particularly when Colorado lawmakers were forced to cut $3 billion in discretionary spending earlier this year as the coronavirus pinched state revenues in the prior and current fiscal years. The state may need to cut as much as $1.6 billion in the next year and $2.2 billion the following year as demands for state services increase, even though state economists are predicting a touch better fiscal outlook.

If the measure is successful, the reductions in spending would most likely come from human services and education because they are the bulk of the general fund spending.

The measure initially was considered as an alternative to an initiative that envisioned an overhaul of the state’s tax system but the latter failed to make the ballot.

Sonnenberg ran a similar bill in the 2020 legislative session to reduce the income tax rate to 4.49%, but it was defeated by the Democratic-controlled state Senate. He paired with the limited-government Independent Institute’s Jon Caldara to push the ballot question.

Supporters argue that the recent increase in the size of the state budget — driven by a strong economy and population growth — is reason enough to use a tax cut to slow spending. Moreover, they point to recent fee increases and Democratic-led legislation approved this year that removed four tax breaks to generate an additional $100 million in state tax revenue for the current fiscal year.

“It only brings back a little of what has already been taken,” Caldara argued at a recent debate on the measure hosted by PBS12 and The Colorado Sun. “We have paid for this tax cut, this tiny tax cut, time and time again.”

Breaking from his party, Gov. Jared Polis has long supported a reduction in the state’s income tax, but he wanted to keep it revenue neutral by removing certain tax breaks. The offsets between the tax bill he signed into law and the ballot measures are not even, but Polis recently expressed support for the intent of the ballot measure.

“We’ve long sought an income tax decrease,” Polis told The Colorado Sun. “We obviously preferred that it was revenue neutral. But particularly in this challenging time, I think Coloradans certainly need tax relief.”

The opposition to the measure is broad-based and includes Democratic state lawmakers, the teachers union and health care advocates, and rural civic organizations such as Club 20 in Grand Junction.

The shared sentiment among them is that the state can’t afford a tax cut now. “What you’ll get with $37 (average tax break) is school cuts, broken infrastructure and an underfunded state,” Bell Policy Center President Scott Wasserman said during the ballot debate.

In addition, liberal advocacy organizations that are eyeing broader changes in the future to create a tiered tax structure and increase income taxes on the wealthy believe this moves the state in the wrong direction.

“At the end of the day,” Wasserman said, “cutting $160 million more from this budget … is going to make life in this state much more unequal and much more expensive for Coloradans.”