Proposition 115 explained: Colorado’s broad access to abortion would be scaled back under ballot measure 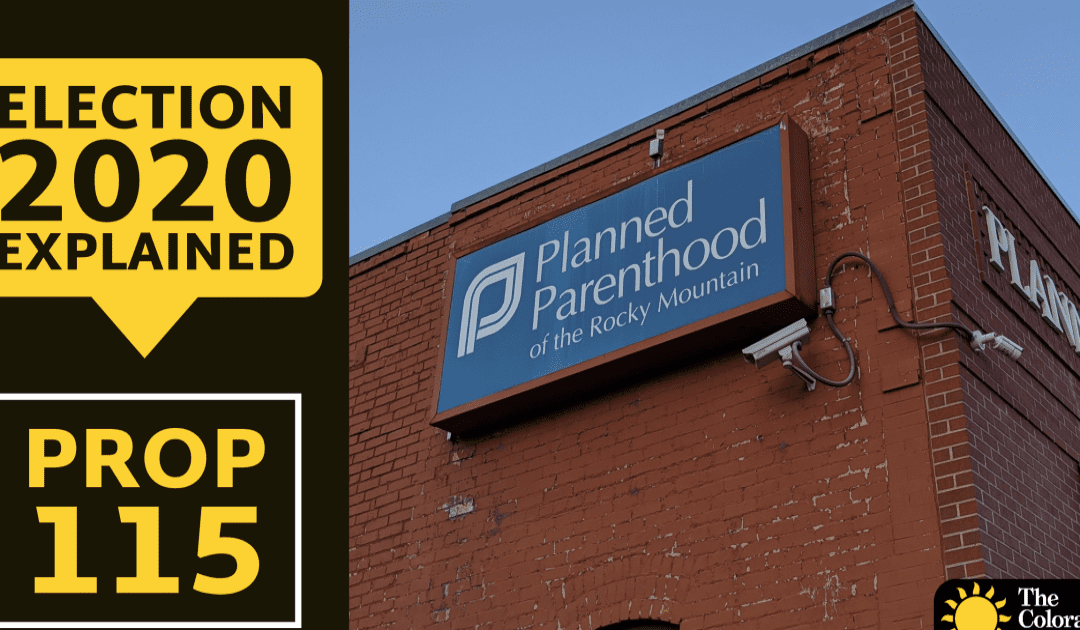 The intensity behind Colorado’s abortion ballot measure escalated to the next level with a vacancy on the U.S. Supreme Court and national Republican leaders’ intent to seat an anti-abortion justice.

Colorado is among the states with the most unrestricted abortion access in the nation — one of seven that does not prohibit abortion at any point during a pregnancy.

Proposition 115 asks voters to ban abortions after 22 weeks of gestation, the stage at which proponents argue that a fetus could survive outside the womb.

With the death of Justice Ruth Bader Ginsburg, an abortion rights proponent, voters now will decide whether to restrict access in Colorado against the backdrop of the looming possibility that the U.S. Supreme Court could strike down Roe v. Wade, which in 1973 protected abortion as a constitutional right.

The campaign against the November ballot initiative said it was flooded with volunteers after Ginsburg’s death, tripling the number of helpers to text and make phone calls in one week. The group also said it brought in the highest amount of donations in a 48-hour period, although it did not release details and its next fundraising report is not required until Oct. 5.

Even if Roe falls, states still could enact their own laws on abortion. If Roe stands, and Proposition 115 passes, abortion rights groups in Colorado say they would attempt to challenge the measure as a violation of the constitutional rights afforded under Roe.

“This is a wake-up call for Colorado voters,” said Stefanie Clarke, communications director for the “Vote No on 115” campaign. “Without the federal court and the Supreme Court there to strike the ban down, we don’t have a last line of defense.”

The campaign working to ban abortion after 22 weeks in Colorado, however, said its ballot measure is legal under Roe — 43 states already ban abortion later in pregnancy.

“The other side is going to have a hard time challenging this anyway,” said Nicole Hunt, co-founder of the Coalition to Help Moms and Save Babies. “Because in 43 other states, it’s already lawful.”

How many abortions happen after 22 weeks in Colorado?

The exact number of abortions occurring after 22 weeks of pregnancy in Colorado is hard to discern because state officials who track that data suspect that abortions are underreported.

The most neutral source of data is the Colorado Department of Public Health and Environment, which puts the number between 200 and 300 per year for most of the past several years.

A Colorado Board of Health regulation requires hospitals or clinic physicians to report abortions at any stage in pregnancy to the state registrar within five days, solely for the purpose of collecting statistics. The state registrar is required by law to “dispose of such reports” after collecting the statistical data, according to Colorado regulations.

Those numbers are lower, however, than those found by the Guttmacher Institute, which surveys abortion providers across the country.

“We don’t know the true extent of potential underreporting,” said Kirk Bol, manager of the vital statistics program at the state health department.

The data does not capture the reason for the abortions. “We are not able to speak to the health of the mother or fetus as a reason for pursuing this option, and are instead reliant solely on these total numbers,” Bol said.

Nationally, the vast majority of abortions, about 89%, happen during the first trimester. About 1% occur after 21 weeks, according to research by the Guttmacher Institute, which supports abortion access.

Women with less education, more disruptive life events including job loss and separation from a partner, and Black women were more likely to have an abortion past the first trimester, the institute found.

Women who had to travel more than 50 miles to the nearest abortion provider were more likely to get an abortion past the first trimester, as were women who live in states that require an in-person counseling visit prior to getting an abortion, Guttmacher reports.

Ballot measure includes only one exception: If the mother was at risk of death

The ballot initiative would ban abortions after 22 weeks with one exception — when the life of the mother is at risk. There are no exceptions built into the proposal for rape, incest or a lethal fetal diagnosis.

A doctor who provides abortions and opposes the ballot measure relayed the story of a 12-year-old girl who was raped by a male relative and didn’t come forward about the pregnancy until after 22 weeks.

Other reasons to get an abortion in later pregnancy include that women may not find out until a mid-pregnancy ultrasound that their baby has severe health problems, or they could learn as their pregnancy progresses that they have preeclampsia or other potentially fatal conditions. Both diagnoses require follow up with specialists and time for a woman to decide whether to continue her pregnancy, said Clarke from “Vote No on 115.”

“They are trying to force women to make a decision before an arbitrary cutoff point,” she said, noting that a woman, her family and her doctors should decide what is best in each case.

But supporters of the measure are sharing emotional stories, too.

“Yes on Prop 115” organizer Hunt was diagnosed with preeclampsia in the middle of her first pregnancy and gave birth at 27 weeks via emergency cesarean section to her daughter, who weighed 1 pound, 9 ounces. The girl, who is now 11, spent three months in the neonatal intensive care unit.

“Her will to live was mighty,” Hunt said. “It gives you a visual perspective of what it looks like to see these young babies fighting for their life.”

Hunt said Colorado abortion law is out of step with advancement in modern medicine. Voters “don’t feel comfortable with babies that could live outside the womb having their lives taken from them,” she said.

The ballot measure comes as the abortion rate is dropping

The abortion rate in Colorado and across the nation has been dropping for the past few decades. The national rate of 13.5 abortions per 1,000 women of reproductive age represents an 8% decline since 2014.

In Colorado, the abortion rate has fallen faster than the national rate, and health officials point to increased access to birth control. Colorado in 2017 became only the third state in the nation to allow women to get prescriptions for the birth control pill at the pharmacy instead of only from a doctor.

Also, state and federal dollars are funding free and low-cost IUDs — intrauterine devices that prevent pregnancy for five years or more — for low-income women and teens.

Not all of those abortions were for Colorado women, however.

Nearly 1,000 abortions last year were for women who traveled across state lines, and in some cases across the country, to seek an abortion in Colorado, presumably because of stricter laws and limited access in their home states.

The three most common states where women came from were Wyoming, New Mexico and South Dakota, but others traveled from Texas, Florida and New Jersey. Nineteen women came from other countries.