Pro-Palestine Advocates Rallied At The Colorado State Capitol This Weekend 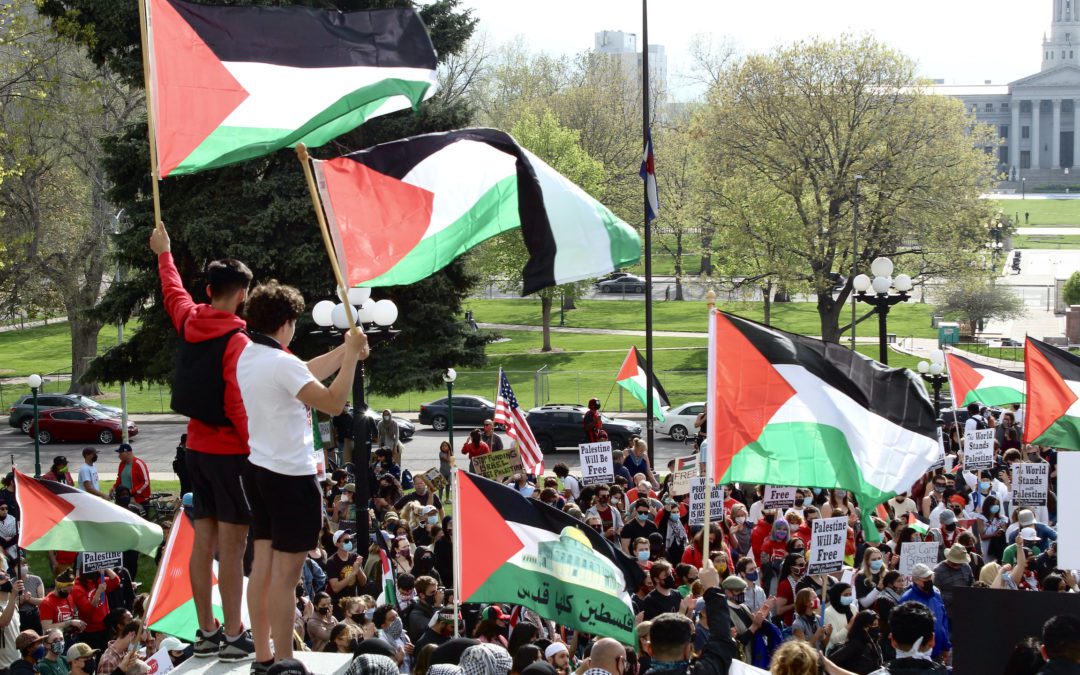 Denver organizers hosted a Pro-Palestine rally on May 14 at the Colorado State Capitol to stand in solidarity against the ongoing conflict in East Jerusalem, West Bank and the Gaza Strip.

In the past weeks, forced evictions of Palestinians in the Sheikh Jarrah neighborhood in East Jerusalem have set off widespread conflict in other Palestinian territories, including against protestors in Gaza and the West Bank. Growing civilian casualties – many of them children – has received international backlash against Israel and met resistance from the de-facto governing authority in Gaza, Hamas.The Colorado Palestine Club and supporting organizations urged local leaders to condemn Israel and demand Congress to cut its funding from the U.S.

QR codes were taped around the area to direct users to a call-to-action campaign. A pre-written call and email script to send to congressional leaders demanding action on H.R. 2590 were provided.

According to the Denver Party of Socialism and Liberation, over a thousand attendees trickled in on Friday evening for the event. As the sun came out, a small crowd turned into a larger gathering. Advocates decked out in keffiyeh’s waved Palestinian flags demanding an end to the 70-year military occupation. Crowds chanted “Free Palestine,” while others spray painted the motto onto cardboard signs. Before speakers took the floor, Palestinian music played in the background, a moment of silence was taken for indigenous peoples and drivers-by on Lincoln Street honked horns in solidarity.

Former representative Joe Salazar, Senator Julie Gonzales and leaders from the Party of Socialism and Liberation Denver, Jewish Voice for Peace, ACLU, among others, gave speeches. Many speakers called upon Governor Jared Polis to condemn Israel.

“Enough is enough for us. The act of displacement of families in Sheik Jarrah is completely inappropriate and it is against humanitarian law in every sense,” explained Nadeen Ibrahim from the Colorado Palestine Club.  “This is not a private real estate problem as the Israeli government tries to pass it off. This is a human rights violation, and we are here in solidarity with the Palestinian people in their fight against that.” She added that the recent terror attacks on worshippers in the Al-Aqsa Mosque during the holy month of Ramadan was an atrocity that threatens freedom of religion.

Ongoing attacks against protestors and journalism outlets – including the Qatari-based news outlet  and the office in Gaza – demand accountability on Israel’s part.

“Here in the United States, Palestinian voices are not recognized. If anything, they are shut out and they are excluded. We are here to raise awareness, and are asking people to call, text or email their respectable congressional delegates,” added Ibrahim.

Regarding the ongoing violence in Gaza, she describes the occupied territory as an open-air prison. Palestinians in Gaza are not allowed to leave the border. Electricity in Gaza runs only a few hours a day and nearly all drinking water is unsanitary due to over-extraction of coastal water–the only water source for residents living in Gaza.

“We see that non-white Jews – especially Ethiopian and Arab, Maghrebi Jews – racially discriminated against [in Israel],” Alex Borenstein told the crowd. “Whenever Jews die in Israel, the Zionist state uses their deaths to justify brutal attacks on Palestinians. Not only is this a gross excuse to carry out senseless violence, but it also endangers the lives of Jews everywhere. For those who argue that being anti-Zionist is anti-Semitic, it is quite the opposite.”

Ibrahim concluded the rally with a final speech in solidarity before leading an energetic crowd to march down Colfax.

To learn more about the Colorado Palestine Club, visit the organization’s Facebook page.

All photography by Hilal Bahcetepe.