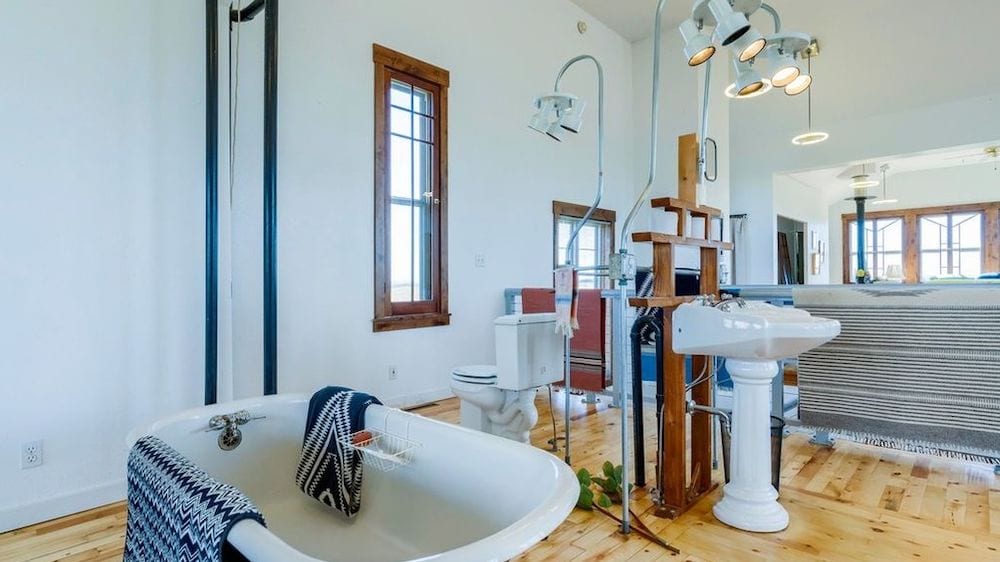 A house in the middle of nowhere in Colorado offers plenty of privacy from neighbors, but once inside, it’s a whole different story.

“It’s a little different than a typical Colorado bungalow,” says listing agent Rob Kittle. “It’s definitely going to take someone with a unique living style since the home is wide open.”

On the market for $489,900, the house is the only one listed in Hereford, which is a collection of a few homes and lots of farmland near the Wyoming border that some people call a ghost town.

“If you want peace and quiet, this is the place to be. No one is going to bug you,” Kittle says.

Just don’t expect much privacy inside. The house was once the Hereford School and has 4,343 square feet with a very open floor plan.

“It’s basically just two big, large, open rooms. Walls are not there. It’s just a big open space,” Kittle explains. “Upstairs, the bathroom is just kind of out in the open. It’s a toilet, sink, and bathtub sitting in the middle of the space.”

The only thing separating the bathroom from the bed is the metal railing of the stairs. For anyone who values modesty, this might take a little getting used to.

The pedestal sink stands in the middle of the room with a tiny mirror above it hanging from a metal and wood contraption with lights on it. Aside from a small shelf, there is no storage.

A toilet is behind the sink in front of a window. A claw-foot tub and a heater are nearby. On the other side of the heater is a seating area and main living space.

“It’s definitely not what we’re accustomed to, having a bathroom sitting in the middle of the master bedroom, which [makes up] the entire top floor,” Kittle says.

Downstairs, the open concept stops in the kitchen, which is highly compartmentalized.

“It’s an extreme amount of cabinets and storage,” Kittle explains. “Where everything else in the house is kind of lacking without a ton of closets or places to store stuff, the kitchen makes up for it.”

Kittle says he thinks the cabinets were just a way to use the space since it was enclosed anyway.

“You definitely can’t reach the ones at the top because they’re way the heck up there,” Kittle says with a laugh, adding that’s the place to store the things you don’t use much. “It was, like, a challenge to see how many cabinets they could stuff into one space.”

Several beds are out in the open opposite huge windows.

The owners “didn’t need all the extra bedrooms and just opted to have it wide open and use it that way versus having compartmentalized spaces,” Kittle explains. “Someone could go in and subdivide it and put in different walls and stuff and turn it into a 10-bedroom home or keep it funky.”

Several ceiling fans are in the space as well as fluorescent lights throughout the house. There’s also a large and mostly unfinished basement.

Kittle says if he were living in the home, he’d definitely reconfigure a few things. As would most people, we assume.

“I would definitely wall off the bathroom and enclose it,” he says with a laugh. “It’s going to take someone with an imagination or open to a different living style.”

The home sits on 3 acres near the Pawnee National Grassland, but not much else.

“There’s nothing in the town of Hereford, no amenities or grocery stores, nothing like that. It’s an old prairie town with lots of farms around the area,” Kittle explains. The nearest city is Cheyenne, WY, which is about 40 miles away.

People who once lived in the town say the building itself has a pedigree. Online stories say Chicago architect John Shellette Van Bergen designed it as a school. Van Bergen worked for architect Frank Lloyd Wright and is known for Prairie-style architecture.