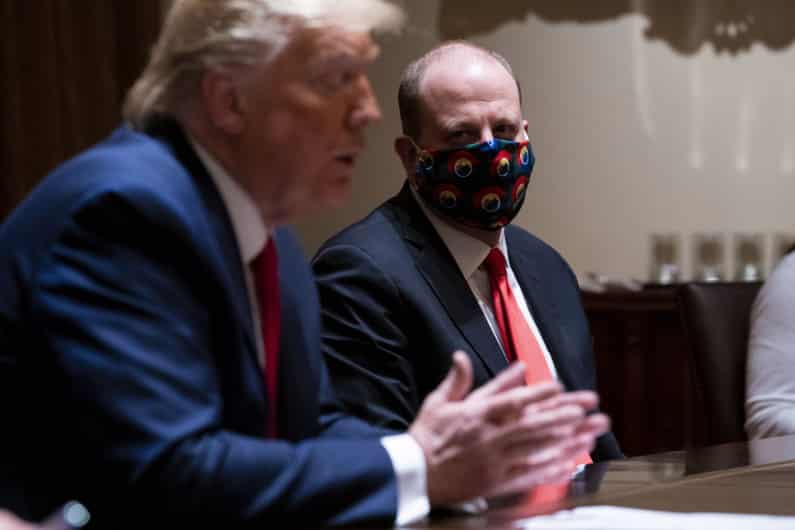 President Donald Trump praised Colorado’s response to the coronavirus, and its Democratic governor, in a meeting at the White House Wednesday.

To Colorado Gov. Jared Polis and North Dakota Gov. Doug Burgum, a Republican, Trump said, “You’re both doing an excellent job, and it’s an honor to have you at the White House.

The White House is grappling with a coronavirus outbreak of its own, and Polis said in a Facebook video ahead of his meeting with Trump that he was tested at the White House, and that he came back negative.

Polis, who has been in regular touch with the Trump administration through the coronavirus pandemic, said the president invited him to meet in person, and that he could not turn down that invitation.

Colorado’s officials wore masks at the meeting, while the president, Birx and officials from North Dakota did not, the White House pool report stated. Polis took off his mask during an exchange with Trump.

Polis conveyed optimism about Colorado’s gradual reopening, which kicked off late last month, well before many other states, and ahead of any other state led by a Democrat.

As evidence of the return of some commerce in the state, Polis shared that he’d recently gotten a haircut, and Trump responded, “looks good.”

“I go there, as you know, and the ski slopes are fantastic,” he told Polis, and the governor said he is hopeful late-season skiing can resume soon.

Polis praised Gardner’s work in helping Colorado acquire sorely needed testing supplies, and Gardner returned the compliment: “The governor’s done a good job, and I appreciate that,” he said.

Polis didn’t share anything at the White House that he hasn’t already shared with media in Colorado.

Much of the public portion of the meeting was taken up by Trump taking questions from reporters.

Schools in Colorado are closed for in-person instruction for the year, and during his exchange with reporters, Trump indicated he disagrees with that decision.

Colorado, which is at the vanguard of the all-mail voting trend, has shown that this is not true. The state is widely regarded as one of the safest places in the country to vote, and the practice has been touted by Republican and Democratic state election officials alike. It’s also increased voter participation.

Neither Gardner nor Polis refuted or even addressed the president’s remark about voting by mail. Gardner was elected during Colorado’s first all-mail election.

Asked on a press call after the meeting why he didn’t stand up to the president, Polis said, “I wasn’t about to bring in a different topic into that meeting, because I’m here to advocate around COVID-19, around coronavirus, not to get into a debate or correct the president when he makes inaccurate statements about the reliability of mail-in voting.”

He clearly made an effort to be diplomatic and not rankle the president. Asked after the meeting whether he was impressed by Trump, Polis said, “He’s the president that we have,” three times in a 14-second span.

Polis said that after the public portion of the meeting, he and others, including Trump advisor Jared Kushner, met with the president for more than 20 minutes in private. During that time, Polis said, they discussed testing and the need to increase supplies at nursing homes.

Polis and Ryan, the health director, had flown to D.C. earlier Wednesday on a commercial flight, which Polis told reporters gave him “some trepidation.” He said his mission in Washington was to advocate for Colorado to receive more federal support, including testing supplies and protective equipment — N95 masks, in particular.

Polis has said many times since March that he’s deeply frustrated by the lack of testing infrastructure in this country. But the first-term governor, who’s also a former U.S. congressman from Boulder, has mostly avoided public criticism of Trump and his cabinet, as he typically also avoids public criticism of Colorado Republicans.

Asked by a fellow Reddit user this week what he thinks of the White House’s response to the coronavirus, Polis responded with the “face with hand over mouth” emoji.

When he was asked at a press conference Monday about his “reluctance to criticize” the White House, Polis said, “I’ll work with anybody and everybody to help the people of Colorado.”

Polis has occasionally spoken out against the White House’s pandemic preparedness and response. In March, he said he opposes corporate bailouts because he’s “not a socialist like Donald Trump.” That same week he told reporters, “I’m furious that as a leader of the free world, we’re being forced to close down restaurants and bars, because the United States, unlike Taiwan, did not have enough (coronavirus) tests.”Popular in the Community