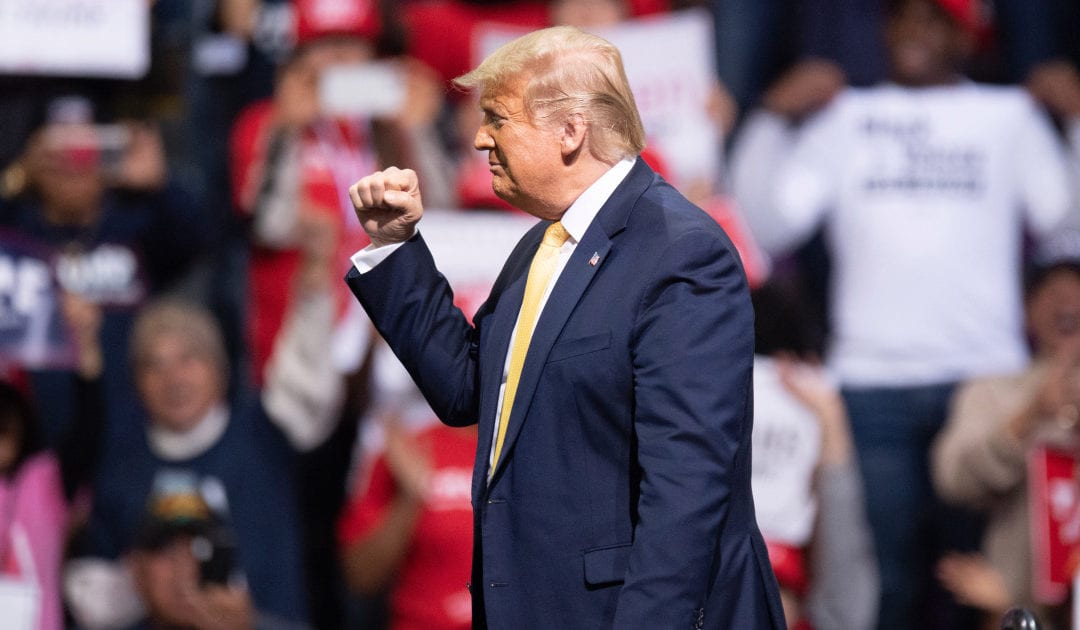 President Donald Trump is collecting the bulk of campaign donations from Colorado, but former Vice President Joe Biden began to close the gap after emerging as the presumptive Democratic nominee.

Colorado residents have donated nearly $5.6 million to Trump, compared with $3.2 million to Biden, according to a Colorado Sun analysis of Federal Election Commission data through the end of June.

Headed into the national party conventions, Trump also holds the lead when it comes to raising money through related fundraising committees for the Republican Party from Colorado donors. Biden couldn’t do the same for Democrats until he’d essentially clinched the nomination. The bulk of these donations go to the political parties and not the candidates, so they are not included in the campaign totals.

Trump’s fundraising edge in Colorado is a reversal from four years ago, when Democrat Hillary Clinton outpaced Trump’s mostly self-funded campaign in the state. He raised less than $500,000 from Colorado donors in 2016 compared to the $4.4 million Clinton raised, the Sun analysis found.

In 2020, the largest donors to Trump, the Republican National Committee and state GOP groups through joint fundraising committees include Otterbox CEO Curtis Richardson of Fort Collins, who gave $500,000, and MDC Holdings Chairman Larry Mizel and his wife, Carol, who gave a combined $100,000, according to campaign finance records. Mizel served as Trump’s finance chairman in Colorado for the 2016 campaign, but it’s not clear who is leading those efforts this cycle.

Despite Trump’s fundraising edge, Biden holds a double-digit polling advantage in Colorado. Trump lost to Clinton in Colorado by 5 percentage points in 2016.

Robin Kolodny, a political scientist at Temple University who studies campaign finance, noted that the money race doesn’t always reflect the election contest. “We are maybe up to 5% of Americans donating to politics,” she said. “It used to be 2% to 3%. Maybe this election might push it up to 6%.”

But Kolodny noted that donating to a campaign, even those giving small amounts, establishes a stronger connection. “That transaction literally makes you a member of the team,” she said. “Even somebody who gives Trump $10 will probably put up a yard sign, talk to a neighbor about Trump.”

Trump built a lead because he began raising money for his reelection immediately after taking office in 2017, while Biden entered the crowded Democratic presidential contest in April 2019. Both candidates visited Colorado in February and held fundraisers for their campaigns. The next campaign finance filings are expected Thursday.

But for months the Democratic donors were split. The top fundraisers on the Democratic side were the state’s home-state candidates, former Gov. John Hickenlooper and U.S. Sen. Michael Bennet. Vermont Sen. Bernie Sanders, who finished first in Colorado’s March presidential primary, also lured big money from the state’s donors.

Biden never held a public campaign event during the Colorado primary. He finished third in Colorado but he won 10 other states on Super Tuesday and went on to win a sizeable number of delegates as the coronavirus pandemic brought the race to a standstill.

The inevitability of Biden’s nomination helped his Colorado fundraising surge in March, and he’s surpassed Trump in money raised from the state every month since then. Biden is also gaining on Trump nationally when it comes to fundraising.

“Each of these candidates were advocating positions and articulating a vision for the Democratic Party that I thought was really important to be heard,” Walsh said. “Obviously, I’m a proud Colorado Democrat, and was very interested in having our Colorado voices heard on a national level as well.”

Walsh donated the maximum $5,600 to Biden’s campaign, most of it in early February.

“He represents that pragmatic progressive vision,” Walsh said of Biden. He added that the “rising tide nationally of support for Vice President Biden is going to enable the Democratic Party to win this election. His decision to choose Kamala Harris just further confirms the confidence people have in his judgment.”

Fort Collins philanthropist Stryker also donated to Hickenlooper, Bennet and Klobuchar before giving Biden $5,600 in late March. And Aspen investor Adam Lewis first donated to Biden more than a year ago, but also gave to a half dozen other presidential candidates.

Biden’s average donation from the state is $122, compared to $60 for Trump. Those relatively small average donations are becoming commonplace as candidates expand beyond big donors to seek smaller, often monthly, donations from previously untapped individuals.

“To get a real minuscule contribution is not hard anymore,” said Kolodny at Temple, noting that for monthly donors it adds up and “by the end of the year, I’m now a large donor.”

The two presidential candidates differ in where their campaign cash comes from.

For Trump, 10% of his donations came from Colorado Springs, with about 9% from Denver. Aurora, Castle Rock, Grand Junction and Longmont also make his top 10 list, but that’s not the same for Biden. About 27% of Biden’s cash comes from Denver, with another 15% from Boulder. Aspen, Lakewood and Steamboat Springs are on the Democrat’s list of top donor cities.

Trump goes all in to raise money with Republicans

The really big donor checks are directed to joint fundraising committees that distribute cash to the respective presidential campaigns and parties.

Four years ago, Trump’s campaign made little use of such traditional fundraising techniques. That’s different in 2020.

Biden’s campaign joined two major joint fundraising groups in April and May. Biden Victory Fund has raised more than $86 million since then, while Biden Action Fund has raised nearly $12 million. About $2.6 million of those totals comes from Colorado donors.

Only the maximum $5,600 donation can go to candidate campaigns. The remainder of the large donations is divided among the federal and state parties, including Colorado’s Republican and Democratic parties. The political parties may spend the money to support the presidential campaigns by funding fieldwork, advertising and more.

The Trump campaign said the fundraising advantage in Colorado is a sign of its strength, despite weak polling in the state. “The Trump campaign is dominating Biden’s at every level – from voter contacts to fundraising to virtual events – and it’s because President Trump has a real vision for America that we’ve been able to share with voters for years,” Trump campaign Deputy Press Secretary Samantha Zager said in a statement.

But the Biden camp emphasized its work on voter outreach over fundraising. “Our campaign is not taking any vote for granted,” Colorado State Director Ernie Apreza said in a statement. “Colorado is key to our success in November, and Coloradans support Joe Biden because they know he will fight tooth and nail for Colorado families.”

This story is a part of #FollowtheMoneyCO, a project of the (COLab), edited by The Colorado Sun with support from the Colorado Media Project.